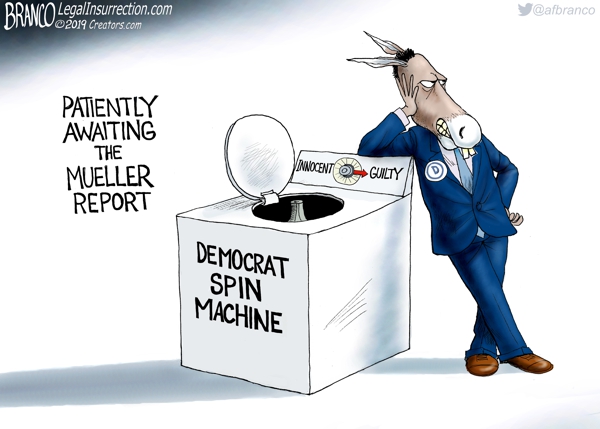 I think you need to do a variation on the theme…… MSM instead of Democrat Party. They are, after all, the propaganda arm of the Democrats!!

Spot on as always, sir!! BTW–I enjoy your podcasts on YouTube! Very insightful and informative!!

They are an awful Leftist Cartel.

notamemberofanyorganizedpolicital in reply to Elzorro. | April 8, 2019 at 1:07 pm

See my post below that will confirm your statement.

Love the cuffed trousers and too long sissypoo blue tie.

I thought the spin machine Is the MSM.

Transparency versus the truth; with transparency, the Democrats will be armed with all the aspersions contained within the heavily biased Mueller report. With the Barr summary, we see that Mueller did not charge Trump with anything.

The MSM daily spin that they all parrot comes from a Soros/Democrat funded website on the West Coast every day at 4 am. This goes to all the TV producers and WAPO-NYT cabal to shape the daily propaganda lies. That is why they all say the same thing in their reporting.

“Mexico did have an active slave trade since the early Spanish period but from the beginning, intermarriage and mixed race offspring created an elaborate caste system.”

Mexico’s average IQ is 87, which reflects a high percentage of natives and to a lesser degree african lineage, while their spanish component average IQ is the same as europeans.

Note, that I am between 1/8 and 1/4 native American, most likely 1/8, but also half German. I think that the smarts came from the German side:)

The Red Thread: Who Runs the Anti-Trump Conspiracies – West/Molyneux

It’s “ridiculous nonsense” because it wasn’t a big enough increase for them.

And, apropos of absolutely nothing,

What must it be like, to go to sleep a Special Counsel running a huge criminal investigation, and wake up to find you’re the object of some idiot comedienne’s fantasies? It would certainly ruin my week!

I’d prefer death to a liaison with that witch.

For Mueller I’d wish he were stuck with her, hell here on earth.