Biden on The View: Sorry, Not Sorry for Touching Women

Biden on The View: Sorry, Not Sorry for Touching Women

Biden apologized for the way others treated Anita Hill, but claims he did nothing wrong. 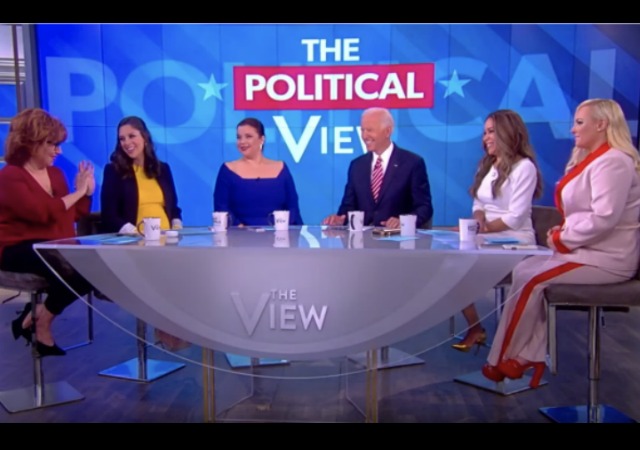 Former Vice President gave his first interview after announcing his presidential campaign on The View this morning. Many topics came up, including his inappropriate touching of women and Anita Hill.

The five women pressed him for apologies, but Biden stopped short of providing one.

Host Sunny Hostin asked Biden if he is sorry for making females feel uncomfortable and if is “prepared to apologize to those women.” He dodged the question.

Asked if he would say he was sorry to the women who have complained that he touched them inappropriately over the years, Mr. Biden repeatedly refused to give a direct apology. “Here’s the deal: I have to be much more aware of the private space of men and women — it’s not just women, but primarily women,” he said.

Pressed further by the hosts, he said: “I’m really sorry if what I did in talking to them, trying to console, that in fact they took it a different way.” He then addressed the women directly, saying, “Sorry I invaded your space,” though he said he did not do anything to make anyone uncomfortable intentionally.

That did not satisfy the women. From Decider:

Hostin was quick to call out Biden’s run-around answer. “They’ve also said, ‘We’d like an apology,’” she fired back. “I’m really sorry for what I did in talking to them or trying to console, that in fact they took it a different way,” he replied. That didn’t seem to satisfy Joy Behar, either. “Nancy Pelosi wants you to say, ‘I’m sorry that I invaded your space.’” Biden was clearly hesitant to apologize, and after a beat, he half-heartedly answered. “I’m sorry I invaded your space,” he said with a shrug. “I’m sorry this happened. But I’m not sorry in the sense that I think I did anything that was intentionally designed to do anything wrong or be inappropriate.”

He promised a few weeks ago that he would be more “mindful” of people’s personal space from now on.

Biden came under scrutiny for the way the senators treated her during the hearings. He personally called Hill the other day to apologize, but Hill brushed it aside.

She told The New York Times on Thursday that “the call from Mr. Biden left her feeling deeply unsatisfied.” She did not “characterize Mr. Biden’s words to her as an apology and said she was not convinced that he has taken full responsibility for his conduct at the hearings — or for the harm he caused other victims of sexual harassment and gender violence.” More from the Times:

“I cannot be satisfied by simply saying, ‘I’m sorry for what happened to you,’” said Ms. Hill, now a professor of social policy, law and women’s studies at Brandeis University. “I will be satisfied when I know there is real change and real accountability and real purpose.”

Ms. Hill, a deeply private woman who does not often speak publicly about her experience, said she does not find Mr. Biden’s conduct disqualifying. “I’m really open to people changing,” she said.

But, she added, she cannot support Mr. Biden for president until he takes full responsibility for his conduct, including his failure to call as corroborating witnesses other women who were willing to testify before the Judiciary Committee. By leaving them out, she said, he created a “he said, she said” situation that did not have to exist.

“The focus on apology, to me, is one thing,” Ms. Hill said. “But he needs to give an apology to the other women and to the American public because we know now how deeply disappointed Americans around the country were about what they saw. And not just women. There are women and men now who have just really lost confidence in our government to respond to the problem of gender violence.”

Joy Behar suggested to Biden that he say, “I’m sorry for the way I treated you, not for the way you were treated.”

Biden instead said that he is “sorry for the way she got treated” and told the hosts to look back at what he “said, and didn’t say” because he believes he didn’t treat “her badly.”

Looks like Hill was correct not to describe Biden’s call as an apology:

On Friday, Mr. Biden spoke largely in passive voice about how Ms. Hill was treated, despite the fact that he led the Senate committee when she testified before it.

Describing their phone call, he said, “I said privately what I’ve said publicly. I’m sorry she was treated the way she was treated. I wish we could have figured out a better way to get this done. I did everything in my power to do what I thought was within the rules to be able to stop things.”

Ana Navarro expressed her disgust that it took so long for Biden to call Hill. He justified the delay because he already “publicly apologized for the way she was treated” and “didn’t want to, quote, invade her space.”

Biden truly thinks he did nothing wrong in either sense. The way Biden worded both responses made me believe he blamed the women. He was a tad more blunt with Hill, passing the blame to others.

Maybe he personally didn’t do anything wrong, but he chaired the Senate Judiciary Committee. President Harry Truman had on his desk “the buck stops here.” Will Biden take that advice or will he blame others for everything?

I don’t think this will sit well with women.

Isn’t it Clarence Thomas that deserves an apology from Joe Biden and Anita Hill?

Women never need to apologize for unverified accusations. Half the time admissions of falsehood or narratives that fall apart don’t even get prosecuted.

Apologies do jack crap to the feminist hustler crowd that wants men to apologize for anything and everything (so they can complain about the apology and dissect it further).

Bido the clown should not have done some of what he did; deep down he knows he was being creepy under the guise of friendliness (women do the same kind of touching at times but often for control of men rather than creepy feels). He never admitted to that, and he can’t if he wants to be a candidate. It’s starting to look like he wants to be the nosedive candidate instead by doing appearances like this.

At the same time, his strategy seems to be to court the middle and pull a left-centrist version of Trump.

Piss off part of your own party but fire up the middle. It’s a calculated risk. Trump took it and won. Biden could do it if the vast majority of his party will pull the “better than Trump” and go vote. The problem is the snowflakes need “special motivation”…maybe he has some late campaign, empty promises stuffed up his sleeve to roll out.

healthyguyfsu, you are correct. The crazy socialist base will stay home if biden is the nominee.

With the field as large as it is, the primaries will not determine the winner prior to the convention. The popular vote in each state will spread out the distribution of delegates, increasing the chances that the still extant super-delegates will once again place their choice ahead of what the base wants.

Bottom line: Chaos at the convention, a widely dissatisfied base and low democrat turnout for the general election, with a big win for President Trump.

The additional upside: Low turnout from the dems could swing the House back to the republicans.

While discussing Biden this a.m. NPR’s Rachael Martin got downright testy (you know how NPR/BBC affect the airy vocal tones of academicians over tea and crumpets) when Commentary magazine writer Noah Rothman described Biden’s handling of topics as maladroit ::scarequotes::

Martin, infuriated, snapped her helmet-visor down, lined up, and spurred her mighty gelding toward the foulmouthed Rothman-beast! (henceforth to be known as The Reichwinger.)

I’m not seeing a lot of leadership potential emerging in Joe. He’s trying to thread his way through the Byzantine web of petty hatreds and festering resentments which constitute modern liberalism and the Democratic intellectual desert. That’s not leadership, that’s just a blundering search for the path toward “going along to get along”—just the ticket for a career Senator, but there’s nothing Executive about it.

Of course like anyone running as a Dem he’s a bit stuck; it’s not the party of ideas, it’s the party of vengeance, and so is mired in the past—even worse, a past which is largely imaginary. But it’s still possible for a candidate to cut his own path; Bernie the Red’s doing it, sticking with his own fanaticisms and avoiding the many bottomless tar-pits of the D’rat landscape. But Gropey Joe just doesn’t seem to have that whole “vision” thing down.

Biden is such an idiot.

He’s doing exactly what he’s done for decades. Mouthing things he doesn’t really believe and expecting to get a pass because he’s useful to the establishment.

He doesn’t understand that he is no longer useful, and they’re no longer covering for him.

Appearing on The View … lending any legitimacy to The View at all … should be disqualifying for holding any level of public office.

That would be a sane world, not the one we’re living in, alas.

Yes, why oh why does anyone give the View any legitimacy. They are dumb women that have no intellectual instinct or curiosity at all and incredibly sick.

Stop giving them an AOC any publicity

The View is designed for women with IQs below 50.

“The View” is nothing more than AOC’s farting cows.

Meghan McCain looks like she’s closing in on 300 pounds.

Meghan McCain’s ridiculous outfit has caused me deep discomfort, because it can’t be unseen. I sure hope she’s prepared to apologize.

Looks like a combination track suit / smoking jacket. I can’t explain the red platform shoes, however. Not appropriate for running or smoking.

Or perhaps there’s a Broadway revival of “The Music Man” on the horizon and she didn’t want to chance being late for the audition.

Sleepy Joe is putting me to sleep. I might even call him ‘rambling Joe.’

If Biden is to stupid to know that he shouldn’t put hands on strangers and abuse them then he’s to stupid to be president. Furthermore, serving 8 years as Vice President for the worst US president ever and not resigning disqualifies him from the presidency also.