Biden Launches Campaign with Attack on Trump, Focuses on Charlottesville

Biden Launches Campaign with Attack on Trump, Focuses on Charlottesville 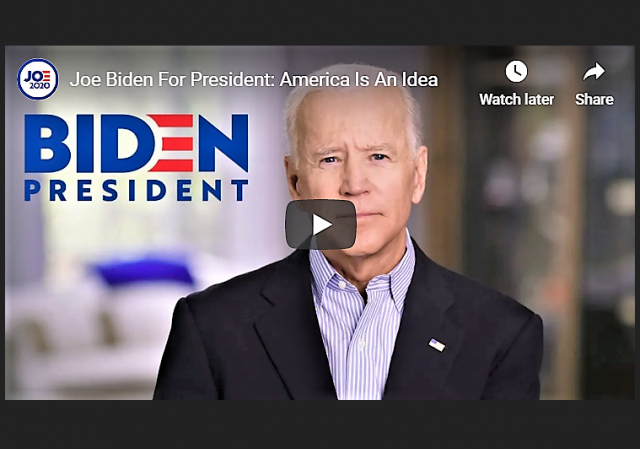 He released a video this morning that lacks the substance most include when launching a campaign: “policy, biography, ideology.” Instead it’s a video over three minutes of someone with Trump Derangement Syndrome.

Maybe Biden took this route to differentiate himself from the other candidates. Plus, Biden is well known after all his time in Washington, DC, so maybe he didn’t feel the need to rehash the past.

I’ve always liked Biden, but this video and launch is plain out weird, mostly because he starts off with a lie about Charlottesville, VA:

Charlottesville is also home to a defining moment for this nation in the last few years. It was there on August of 2017 we saw Klansmen and white supremacists and neo-Nazis come out in the open, their crazed faces illuminated by torches, veins bulging, and bearing the fangs of racism. Chanting the same anti-Semitic bile heard across Europe in the ‘30s. And they were met by a courageous group of Americans, and a violent clash ensued and a brave young woman lost her life.

With those words, the president of the United States assigned a moral equivalence between those spreading hate and those with the courage to stand against it. And in that moment, I knew the threat to this nation was unlike any I had ever seen in my lifetime.

Here is the transcript of what Trump really said about Charlottesville:

The transcript from Trump’s Charlottesville speech in which he specifically excludes the racists from the “fine people” category and says they should be “condemned totally.” pic.twitter.com/cdxL4GbZ7J

Here’s the thing about Trump. There are legit criticisms about him, like all politicians before him, so I do not understand the need to lie or stretch the truth about him.

Biden becomes a drama queen when he claimed that America’s “core values of this nation, our standing in the world, our very democracy, everything that has made America, America, is at stake.” Here’s more:

Folks, America’s an idea, an idea that’s stronger than any army, bigger than any ocean, more powerful than any dictator or tyrant. It gives hope to the most desperate people on earth, it guarantees that everyone is treated with dignity and gives hate no safe harbor. It instills in every person in this country the belief that no matter where you start in life, there’s nothing you can’t achieve if you work at it.

That’s what we believe. And above all else, that’s what’s at stake in this election.

No. No it’s not. I am NO fan of Trump, but calm down. America is still the greatest country in the world. He acts like Trump will LITRALLY rip up our Constitution, completely close our borders, strip everyone of their natural rights, dogs and cats living together….mass hysteria!

Problem with Joe Biden focusing on “America is an Idea” patriotic theme in primaries is that the energy in the Dem Party — the identity politics base, the Bernie Bros/Gals, the AOC/Ihlan Omar activists — unfortunately think “America is a Bad Idea” https://t.co/ctjN1PgHDO

We’ve had two years of Trump. Has his presidency really altered lives for the worse? Our republic does not face the danger of going the way of communist states. It seems like “foreword” has become “backwards” as Biden thinks America has changed for the worst during this administration.

But where are your ideas, Biden? The video is full of the same old rhetoric we hear on a daily basis about Trump. How about your ideas? Where do you stand on policy and issues? I know we could look it up on his website, but put it in the damn video instead of coming across as someone with Trump Derangement Syndrome.

Trump welcomed Joe to the race:

Welcome to the race Sleepy Joe. I only hope you have the intelligence, long in doubt, to wage a successful primary campaign. It will be nasty – you will be dealing with people who truly have some very sick & demented ideas. But if you make it, I will see you at the Starting Gate!

Thing is, I truly think Biden is the only candidate that can cause problems for Trump. Biden cannot ignore reality though. Our economy is in decent shape, jobs report have mostly been stellar, unemployment is still low, and pay is going up.

All in all, that is what people care about. They want a steady job and the ability to provide for themselves and their family.

He doesn’t stand a chance as he quoted some dead white guy and said “Creator”. He’ll be ripped to shreds by the Baal worshipping, identitarian, left.

Instead it’s a video over three minutes of someone with Trump Derangement Syndrome.

He’s just trying to connect with the current Dimocrat base, by showing he shares their affliction.

Here’s the thing about Trump. There are legit criticisms about him, like all politicians before him, so I do not understand the need to lie or stretch the truth about him.

Exactly. And the same is true on the other side. There are so many legitimate criticisms of the Clintons, the 0bamas, Soros, etc., so why do so many people on the right, including right here, insist on making up lies about them? How is the truth not damning enough?

He’s liked but does likable translate into primary victories when the Midwest except for Iowa is not early in the primary
Cycle? Who is passionate about Biden? He is a good politician but he has been coasting for years.

We could be at peak Biden if he stumbles on fund raising.

He was going to run with Stacy Adams but he did not like the smell of her Shampoo.

All Trump has done is Make America Great Again

Wonder who Slow Joe Biteme is plagerising from now. He has been on the wrong side of most major political decisions for the last 50 years. Too old, too stupid, just wrong, wrong, wrong! The dinosaur media will cover for him til a more attractive shill comes along. Never forget the narrative.

So. Not much danger that the “It’s My Turn” candidate will run an “ideas” campaign. It’ll be a drab “Here’s a repeat of another lie about DJT you probably haven’t heard in the past hour” campaign. Not too surprising. He’ll leave the socialist dream stuff and the SJW race-baiting to the other candidates, and run as the drab but safe candidate; a Liberal idea of the dead center.

Chris Christie is already out there with his sore loser RINO “warnings”:

So are both Christie and Romney now competing for the VP slot on the Dem ticket?

I would posit they are both competing for the “Maverick Mantle” formerly worn by the vile and self-serving John McCain.

First day and Biden goes straight to the gutter.

He’s going straight to the gutter because that’s where the Democrats supporters are. I’ve already seen claims that “when Trump loses in 2020 he’ll refuse to leave the White House” and they’ll need to forcibly remove him.

Many have forgotten about the reasons “Slo Joe” fared so poorly when he ran for president: 1) he is very gaffe prone (7-11)and 2) he can easily be used as a human punching bag. Trump won’t let him get away with what Paul Ryan did.

Hats! Biden needs to create a visible presence. May I suggest a beret with a red star? Worked for Che … although mostly after he was gone… and since Biden is close to washed up, it may work.

The danger in a successful economy, “wealth envy” rises and the Dems promise to spread the wealth. Of course in poor times…the same mantra.

Such a regrettable waste of humanity. O’biden has made a life of being a government wart.

Sure hope that some of the secret service victims who have suffered him have an opportunity to speak as character witnesses.

I’ll BID $5 bucks – to not hear from “Plagiarizen Joe” ever again!

1790 was the official beginning of the US under its Constitution, so you are over 200 years behind.

Read it again and stop trying to plant extra footnotes into it…you and your vote whoring clique aren’t that important.

That should take some of the sting off of Obama not endorsing him.

At this point Avenatti’s best hope is to shop for a pardon. I wonder if he is shopping with a client’s credit card, though.

Well what do you expect? He can’t run on his record…