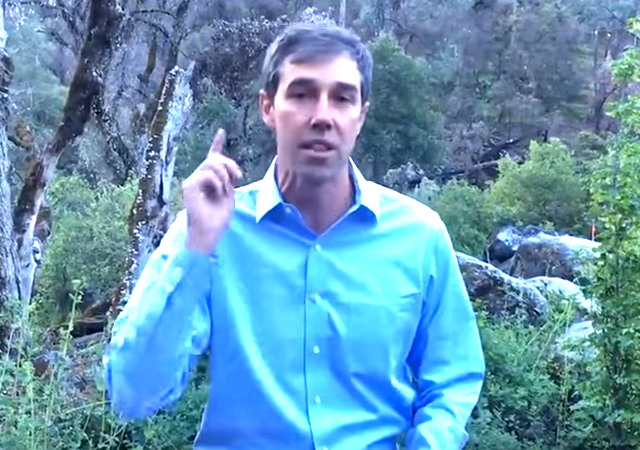 Beto O’Rourke has stagnated in polls and isn’t getting nearly as much adoring press coverage as he did just a month ago. Now he’s trying to get some notice by advancing his own version of the Green New Deal.

Democratic presidential candidate Beto O’Rourke, trailing in the polls despite a high-profile campaign launch, sought to prove his policy chops by unveiling a $5 trillion plan to battle climate change and reach net zero carbon emissions in the U.S. by 2050.

“The greatest threat we face — which will test our country, our democracy, every single one of us — is climate change. We have one last chance to unleash the ingenuity and political will of hundreds of millions of Americans to meet this moment before it’s too late,” the former three-term congressman from Texas warned as he unveiled his proposal Monday.

This is an accurate analysis:

“Beto’s $5 trillion in new government spending is strictly designed to impress his chardonnay swilling coastal elite friends. The fact is the money has to come from someone and taxpayers across the country are not going to foot the bill for Beto’s crazy plans,” Republican National Committee spokesperson Mandi Merritt said in a statement.

O’Rourke’s four-pillar framework, detailed in a campaign memo, combines proposed executive action with legislation he pledges to introduce within his first 100 days in office and outlines further steps to take in response to climate-related disasters in the future. It amounts to the first major policy rollout for a campaign that critics have targeted for being light on specifics…

The meat of the O’Rourke plan is a promise to send Congress, as his first piece of legislation, a bill that would mobilize $5 trillion over the next 10 years to upgrade infrastructure and spur innovation — including more than a trillion dollars in tax incentives to reduce emissions, and $250 billion dedicated directly to research and development.

Here’s a video of Beto standing in the woods, wearing the only outfit he owns, announcing the plan:

In a development which should surprise absolutely no one, the far left Sunrise Movement, which played a pivotal role in AOC’s Green New Deal, is completely unsatisfied by O’Rourke’s proposal. After all, the world is going to end in 12 years, remember?

.@BetoORourke: this is not what the “latest science demands” and a 2050 net-zero emissions goal is not in line with the #GreenNewDeal. pic.twitter.com/mgWOIjEaME

To achieve that, the US must do much more, much faster.

That’s why the #GreenNewDeal calls for a 10-year mobilization to move to net-zero emissions.

Weeks ago, Beto told students he supported the “goal of getting to “net-zero” carbon emissions by the year 2030.”

But now he appears to be walking that back.https://t.co/i1zxiKvX3Q

Beto claims to support the Green New Deal, but his plan is out of line with the timeline it lays out and the scale of action that scientists say is necessary to take here in the United States to give our generation a livable future.

It’ll be fascinating to see if this policy proposal moves the needle for Beto in the coming weeks.

I wouldn’t bet on it.

By 2050 all cars will be replaced by Skateboards.

Much harder to get a DUI that way.

notamemberofanyorganizedpolicital in reply to healthguyfsu. | April 30, 2019 at 9:37 am

But Robert Francis O’Rouke will still be FAKE FAKE FAKE
even then.

This generation of heathen con-men seek to replace Christianity with the Church of Global Warming. Their pitch is similar to the pitches of confidence men from time immemorial. Give me your money, your riches and I will provide you with salvation in return.

Since they are good Socialists, the money goes to the “government” to be divvied up among their buddies.

Draw a horizontal line across a page, label the x-axis from the year 1880 to today’s date. Label the y-axis in whole degrees. This will represent the estimated change in global averaged temps… It is a near straight line!

The rate of Sea Level Rise(SLR)is even more benign with a constant rate for the last 6000-8000 years.

How many of you remember the smog over our major cities in America? It is different today.

Look at our rivers. They are way cleaner. Commercial dump sites are being cleaned albeit slower than some would like.

There are too many imaginary Global Warming boogie-men.

Robert Francis O’Rourke, the rich White Irish-American unemployed former Congressman with the fake Hispanic nickname can’t compete for Socialist-Democrat/MSM attention with the real homosexual with a job as Mayor. The difficult to pronounce last name adds a bit of humor to an otherwise unremarkable Socialist-Democrat selling himself as a political “moderate”.

The up-thrust finger. Imams and Democrats do that a lot.

We must end all migration now to reduce our future population. That will save as much carbon as the Paris agreement would have prevented. For the children!!!

Because when your crisis intervention fails to accomplish much of anything then it can only be time for an urgently urgent intervention! Which requires even more money, and even more top-down political control of what citizens may or may not do.

Then again, if there is climate change (anthropogenic or not), well, aren’t those motivation speakers always going on about how “change is good”? Of course some changes bring more good than bad and some do the opposite, yet I’ve yet to hear a climate hysteric (is one still allowed to use that word, “hysteric”?) there’s no upside but only downside to any climate change of any sort.

Which is obviously not true: there will be upsides as well as downsides, winners as well as losers. And perhaps a rational actor would choose to make the most of climate change by maximizing benefits from the positives and mitigating losses from the negatives.

Instead of preaching bumper-sticker “science” and threatening to blow $5 trillion of other people’s money.

But, but, but…..what about continental drift? Sure you see tv commercials about how to end incontinence, but we keep drifting toward Canada. No wait, maybe that was Hawaii. Anyway, it’s a pisser.

This guy’s a climate denier fraud.

Because I call BS on BO, they call me a “climate denier”. I respond: “No, I’m a climate realist.”

They, on the other hand are Climate Scammers.

But of course, since Climate Change is so important, fraud involving these funds should be a capital offense.

They have to pass a bill…any bill…before it’s too late. That way when it doesn’t grow warmer they can declare victory. Remember the ozone hole?

For decades, the world was coming to an end in 10 years.

The mere passage of a law is all that matters. Hashtags supersized by Congress will save the planet.

Beto beats his gums with moronic codswallop. Meh–color me not impressed. But he was smart enough to marry a very wealthy woman. So he’s got the Jean Fraud Kerry thing down pat. But Kerry was a loser too.

Starting with the first Earth Day — we are now into our 50th year of the earth ending in 10 years if we don’t take immediate and drastic action.

I don’t think Beano has a clue what to do with five trillion dollars, but I guarantee you once these taxes are implemented they will never be rolled back.

Big numbers are incomprehensible. $5 Trillion doesn’t mean much to most people.

Call it $15k from every man, woman and child in America.

Well, let’s see. Zero “carbon emissions” requires the absolute cessation of all oxygen breathing/CO2 emitting life on Earth, at which point it won’t really matter whether the sea levels rise enough to REflood the coastal plain.

How can anyone take this guy seriously?
Suspend the campaign for a missing turtle? How does a turtle speed off to the darkness of foreign lands fast enough not to be maybe at the front door by morning? Of course the turtle is undoubtedly smarter than buttho so it’s probably more than possible.

In San Diego, @BetoORourke says he has to head home to address family crises including the disappearance of baby Gus, the family turtle. Prognosis for finding Gus doesn’t look good, he says.

Okey dokey then Beato ya Meato. What say we start with your money, your sacrifices?