A group “dedicated to … gender equality and the empowerment of women” puts the Iranian regime in a position of power over women’s rights. 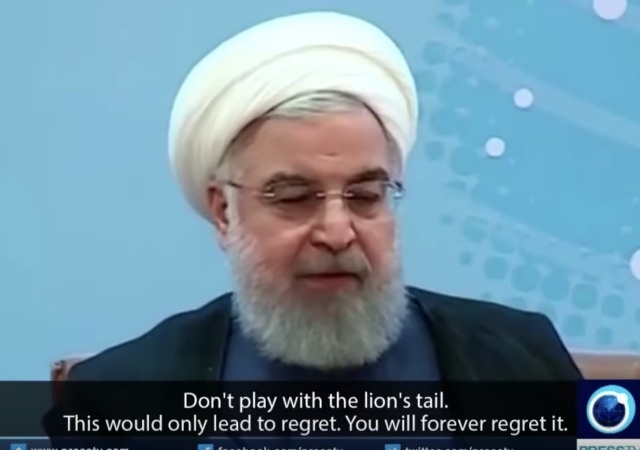 UN Watch‘s Hillel Neuer reported that the United Nations appointed Iran to serve on the Global Women’s Rights Commission.  As he noted in his tweet, the appointment came “a day after the regime sentenced women’s rights lawyer Nasrin Sotudeh to 38 years prison & 148 lashes.”

Neuer compiled a list of global abuse allegations this particular commission is charged with monitoring and posted them on his website. They include:

-Arbitrary arrests of women
-Deaths and torture of women in custody
-Forced disappearances or abductions of women
-Discriminatory application of punishments in law based on sex, including corporal and capital punishment
-Violation of the rights of women human rights defenders to freedom of expression and assembly
-Threats or pressure exerted on women not to complain or to withdraw complaints
-Impunity for violations of the human rights of women
-Stereotypical attitudes towards the role and responsibilities of women
-Domestic violence
-Forced marriage and marital rape
-Virginity testing

No joke: the Islamic Republic of #Iran was just appointed to the @UN_Women‘s rights committee that judges complaints of women’s rights violations.

The website for the UN Commission on the Status of Women says that the group “is the principal global intergovernmental body exclusively dedicated to the promotion of gender equality and the empowerment of women.” It also states:

The CSW is instrumental in promoting women’s rights, documenting the reality of women’s lives throughout the world, and shaping global standards on gender equality and the empowerment of women.

To describe this turn of events as appalling is an understatement. Iran’s human rights abuse record is lengthy, and women’s rights in the country are severely limited, as this 2017 State Department document noted in detail.

Plus, as Neuer pointed out, Iran’s appointment to this commission came on the day the country handed down a sentence of 38 years in prison and 148 lashes to human rights lawyer Nasrin Sotoudeh for her work on behalf of oppressed Iranian women:

Sotoudeh’s husband, Reza Khandan, wrote on Facebook on March 11, 2019, that his wife has been sentenced to 38 years in prison and 148 lashes (five years for one case and 33 years for a second case involving a combined total of nine charges). In January 2019 Khandan was also sentenced to six years in prison.

During a brief phone conversation with her husband, Sotoudeh insisted that her sentence is 38 years in prison and 148 lashes and should be reported in its original form regardless of whether it is later reduced.

“I don’t know how many years she got for each of the charges because my conversation with Nasrin only lasted a few minutes and we didn’t get to the details,” Khandan told CHRI. “I only know that the biggest sentence was 12 years for [encouraging people to] ‘corruption and prostitution.’”

According to the New York Times, her husband has run afoul of the Iranian government, too:

Mr. Khandan, her husband, was sentenced to six years in January for illicitly posting updates about his wife’s case on Facebook, but he has yet to be imprisoned on that charge, Hadi Ghaemi, the executive director of the Center for Human Rights in Iran, which is based in New York, told The New York Times last week.

Also, on the same week Iran was given this seat, the UN General Assembly president warned at a “Women in Power” summit that the political power of women worldwide was in “serious regression”:

There has been a “serious regression” in the political power of women across the world in recent years, UN General Assembly President María Fernanda Espinosa told delegates to the annual summit of women activists at UN Headquarters in New York on Tuesday.

The former Ecuadorian Minister of Foreign Affairs who leads the 193-member world body, pointed out that in 2015 it would have taken 30 years to close the gender gap, but now, she told the Commission on the Status of Women (CSW), if current trends continue, gender parity will not be reached for “107 years”.

If the current trend of the United Nations appointing oppressive regimes like Iran to positions of power within their organization continues, women around the world will be waiting a whole lot longer for that gender parity.

The UN mocks the UN.

The UN is delusional. Can’t we send them to Geneva or Brussels???

No, Send them to Gaza.

Even better. But make sure we’re out of the insane asylum first.

I suggest that it is better to start air dropping palestinians into Iran. Israel deserves to have palestinians cleared out, and Jews territory returned.

The US should immediately resign its membership in the shameful UN.

The big problem with the UN is every country automatically gets to be a member, even the ones fully owned and operated by autocratic thugs or organized crime — which is at least half the membership, conservatively.

There it is, right in the middle of their “holy” book for all to see. Surah 4,34: “Men are in charge of women, because Allah hath made the one of them to excel the other, and because they spend of their property (for the support of women). So good women are the obedient, guarding in secret that which Allah hath guarded. As for those from whom ye fear rebellion, admonish them and banish them to beds apart, and scourge them. Then if they obey you, seek not a way against them. Lo! Allah is ever High, Exalted, Great.” [Pickthall version]

In all cultures men beat women. But only in Islam is it divinely authorized. Not only authorized/allowed, but encouraged. “As for those from whom ye fear rebellion, admonish them and banish them to beds apart, and scourge them.”

To be fair, the Bible calls for subordination of wives to their husbands.

There’s a lot less of the banishing and scourging, though. In fact, I think most women do the bed banishing in WASP relationships.

Relocate the UN to sub saharan Africa. Cost of living, lack of too expensive frills should lead to easier concentration on tasks at hand. This will lessen the financial burden of the United States. I look forward to this. Not gonna happen but I still hope.

How many billions do we send to this sham organization every year?

Is this from the Babylon Bee or The Onion?

Are we be trolled or is the world now certifiably insane?

About as Orwellian as the Cairo Declaration on Human Rights in Islam.