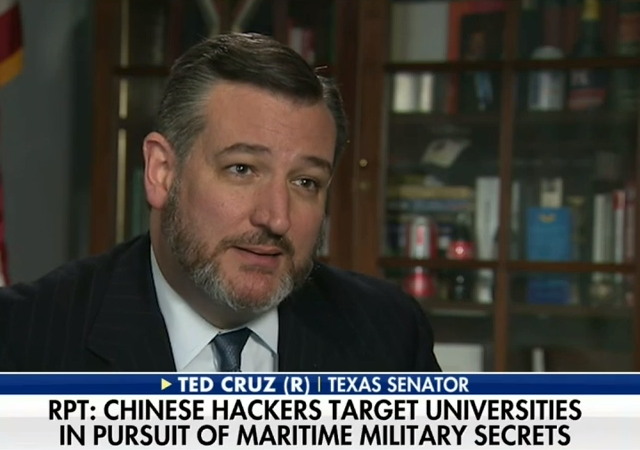 There is growing concern among experts in the U.S. that China is targeting American universities for hacking, specifically for maritime technology.

Dustin Volz of the Wall Street Journal published an extensive report on this yesterday, and although it is behind a paywall, here is an excerpt via Marketwatch:

Chinese hackers target University of Hawaii, MIT and other schools in pursuit of military secrets

Chinese hackers have targeted more than two dozen universities in the U.S. and around the globe as part of an elaborate scheme to steal research about maritime technology being developed for military use, according to cybersecurity experts and current and former U.S. officials.

The University of Hawaii, the University of Washington and Massachusetts Institute of Technology are among at least 27 universities in the U.S., Canada and Southeast Asia that Beijing has targeted, according to iDefense, a cybersecurity intelligence unit of Accenture Security.

The research, to be published this week, is the latest indication that Chinese cyberattacks to steal U.S. military and economic secrets are on the rise. The findings, reviewed by The Wall Street Journal, name a substantial list of university targets for the first time, reflecting the breadth and nature of the ongoing cyber campaign that iDefense said dates to at least April 2017.

Luke Rosiak of the Daily Caller has more on this:

The hackers took advantage of academic researchers not noticing that emails pretending to be from peers at other institutions were actually “phishing” attempts or contained malware. Infected files then spread, for example, from the University of Hawaii’s Applied Research Laboratory to Penn State.

“They are a full-fledged operation,” Ben Read, senior manager for cyber espionage analysis at FireEye, told the Wall Street Journal. “And they are not going anywhere.”

Many of the schools are linked to the Woods Hole Oceanographic Institution, a Massachusetts research institute that located the sunken Titanic and partners with the Naval Undersea Warfare Center.

The team is suspected of hacking a warfare center contractor and stealing plans for a supersonic anti-ship missile.

The cybersecurity firm iDefense said it identified breaches of universities by noticing that the schools’ servers were pinging China.

Chinese officials didn’t immediately respond to a request for comment, but have denied that they engage in cyberattacks.

Rosiak also points to the issue of Confucius Institutes, which are found on many American college campuses, and which have been accused of spreading propaganda from China:

The country has also mounted an influence operation targeted at American universities. So-called Confucius Institutes inside U.S. colleges, which Chinese officials have described as effective arms for propaganda, have grown considerably in recent years. College administrators have expressed little concern even as some Chinese staff affiliated with the program sabotaged academic efforts, and the Chinese government shut down a reciprocal program in that country. Seventy percent of U.S. universities hosting the Chinese program violated the law by not disclosing the foreign funding, according to a bipartisan Senate report.

Senator Ted Cruz discussed this during a recent appearance on FOX News:

As the video mentions, Cruz is planning to reintroduce the “Stop Higher Education Espionage and Theft Act” which can be read here.

“growing concern”? Where have these nitwits been for the last 3 decades?

Yep, they’ve been robbing us blind. I’d venture to guess they have thousands of spies over here posing as students. They strong-arm US companies into giving up IP in order to do business over there, and then there is the flat-out hacking and stealing. China is not our friend.

“Where have these nitwits been…”

They always knew, and knew “we”* didn’t know. Now that we know they are suddenly concerned.

Their bank accounts are full.

*of course some of us knew.

Stories of hacking to steal information are practically routine now. Surely the intellectual property owners see the investment to protect their knowledge as worthwhile. Maybe that’s why universities are targeted now.

Of course, it is rich that the academic class, which sees itself as superior in many instances, is so vulnerable to one step above the Nigerian money scames… LOL

If there is one thing the US simply cannot (or refuses to) do it’s keeping secrets. During the Manhattan project and the Norden project in WWII, our enemies knew everything we were doing almost in real time. Even the President knew less. Today, everyone leaks.

Being “concerned” about security is not the same as being deadly serious about it. There has to be accountability and consequences.

Yet I thought one of the most impactful strategies during the escalating Cold War era of Reagan was the confusing and essentially obfuscated weapons program. Star Wars? I think that was the name. But from what little I’ve read the illusion of the program was powerful. The truth something different.

SDI deployment wasn’t the issue. It was not secret that it didn’t exist. But we had the technology and the funds ready to invest in it and that is the key. The Russian economy was collapsing as oil prices were artificially kept at/below $10. The Russian military knew that couldn’t win if we decided to commit to the program.

There was no secret leaked and today, missile defense systems are a reality so we know they work. The Russians know that no one goes from the drawing board to deployment better than we do. THAT is the secret to our success. It’s not just the technology.

Still it is critical to make everyone work hard to figure out what we are doing. That gives us an even bigger advantage. Just think of all of that technology waiting to engineered into unique weapons that no one else has even imagined yet. China may be scaring ramping up their military but they are not likely ready to fight the war we will be preparing to fight.

It was not secret that it didn’t exist.

That might be true at a some point in the future or afterward. However, all I’ve ever contacted (read or seen) suggests that the Russian invested HEAVILY to uncover what they could about the program. And the program was not fully artificial. But we were able to inflate the reputation successfully. And cause them to spend on their side.

The Russians obtained a large part of the theoretical technical knowledge necessary to construct their first atomic bomb, from Soviet agents in place in the Manhatten project. These agents were able to infiltrate the project because efforts to identify and remove them were stymied by pro-Soviet politicians in the FDR administration, some very, very highly placed. The same thing has been happening with Chinese espionage, in this country. Very highly placed government officials, as well as very influential Establishment business leaders and academics, have worked diligently to stymie any effort to stop the espionage activities of the Chinese government.

The British did a lousy job of vetting their Manhattan scientists also. At that time they were rather glib. They later gave the Soviets a working turbojet fighter engine and allowed the Soviets to tour the factory… gum soled shoes picking up metal filings for analysis. FDR had to change VP’s… imagine if FDR hadn’t and a pro-Soviet President sat in the Oval Office after FDR’s death?

“Tail Gunner Joe” McCarthy was correct in assertions of deep Soviet penetration in US government.

We have been sold out by both parties. Do not forget that.

We were sold out by the Clintons and the Bushes, do not forget that.

“The “Chinagate” fundraising scandal plagued the 1996 Bill Clinton-Al Gore campaign and Hillary was very much involved. Chinagate aka Commercegate is the most serious scandal in U.S. history. It involves the transfer of America’s most sensitive technology, including but not limited to nuclear missile and satellite technology, possibly in exchange for millions of dollars in contributions to the 1996 Clinton-Gore re-election effort and the Democratic National Committee.”

We are under siege. It could not happen without help from the inside: from the left and the GOPe.

There is inevitably some tradeoff between convenience and security regarding computer and IT use. Private employers recognize this, and (mostly) are willing to tolerate some user inconvenience in return for enhanced security.

But higher ed. is a very different environment, and all too often one in which “trust me” is all it takes to gain access to restricted material.

Thus it’s not all that surprising that even crude attacks such as “phishing” would often be successful in this environment. Overall it’s difficult to say what calamity would be sufficient for these schools to actually get serious about security.

“higher ed.” likes the Chinese system and is happy to sell you out.

Hacking has been going on for so long that the people to be blamed are not the Chinese et al., they are the administrators of Hawaii, Washington, MIT (!!!???) and all the other affected schools. The first step should be a major purge of their lazy, corrupt and incompetent IT departments. That should be a general rule: If any institution or agency gets hacked, its IT department gets fired.

The Chinese, Koreans (both), Japanese and Russians are just picking up the fruit left lying on the ground.

The cybersecurity firm iDefense said it identified breaches of universities by noticing that the schools’ servers were pinging China.

Oh, get real. A ping doesn’t mean that anything has been breached, it just means that one computer wants to talk to another, mostly routine chatter to keep track of which computers are at which addresses. In any case, the Chinese are not going to be so simple-minded as to talk directly to servers in China. They’ll talk to the big server farms in New Jersey and Texas, just like everybody else.

There’s no doubt the Chinese are spying. Like bank robbers going where the money is, they’ll go where the technological information is. But who’s pinging whom is not exactly a hot trail of fingerprints.

[…] more than two dozen universities in the U.S. and around the globe as part of an elaborate scheme to steal research about maritime technology being developed for military use, according to cybersecurity experts and current and former U.S. […]