It has a proposal for national family paid leave and a request for money to form Space Force. 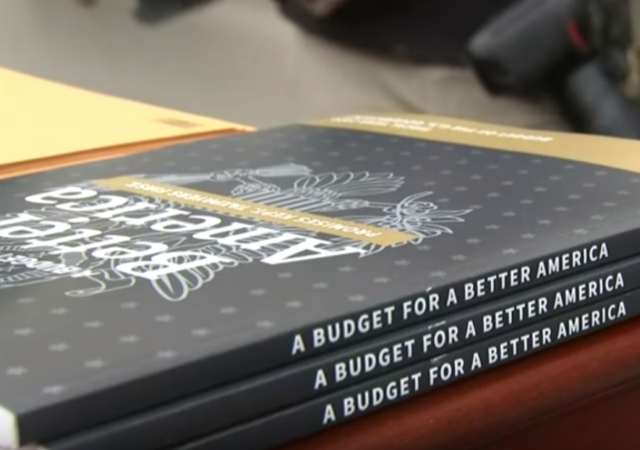 President Donald Trump released his budget for the 2020 fiscal year, which adds up to $4.7 trillion.

The budget includes spending cuts up to $2.7 trillion. The majority of that number comes from $1.9 trillion in entitlement cuts.

The budget proposes to cut $327 billion from safety-net programs and will include work requirements for recipients of food stamps, Medicaid and federal housing programs, the senior administration official said.

This idea ruffled the Democrats’ feathers since Trump originally asked for $5.7 billion for a wall, which caused a partial shutdown of the government in December and January. From Fox News:

Democrats, though, continue to argue that an emergency at the border is “non-existent,” and promised to block the proposal to build the wall again.

“President Trump hurt millions of Americans and caused widespread chaos when he recklessly shut down the government to try to get his expensive and ineffective wall, which he promised would be paid for by Mexico,” Senate Minority Leader Chuck Schumer, D-N.Y., and House Speaker Nancy Pelosi, D-Calif., said in a statement.

“Congress refused to fund his wall and he was forced to admit defeat and reopen the government. The same thing will repeat itself if he tries this again. We hope he learned his lesson,” they said, adding that the funding would be better put to use toward domestic programs like “education and workforce development.”

Trump asks for cuts in “domestic discretionary spending,” but wants more money for “defense and veterans affairs.” From The Washington Examiner:

While cutting domestic discretionary spending for this coming year across the board, the Trump administration will ask Congress for significant increases in defense and veterans affairs spending. The administration plans to ask for $750 billion in new defense spending, up from an expected total of $716 billion in the current fiscal year.

It has a proposal for national paid family leave along with a request for money to form Space Force “as a new branch of the military.” There’s also a request for a work requirement:

Meanwhile, the budget aims to implement new welfare requirements — namely, that Americans 18-65 years old work at least 20 hours a week in a job, a job training program or a community service program to secure a range of benefits and aid.

In order for a president’s budget to pass, it needs bipartisan support. It cannot pass the Senate without 60 votes. More than likely the House will squash the budget since Democrats control that chamber.

No doubt Miss Nancy has already declared it DOA.

Deemed it unworthy or not viable.

I am sure that she is questioning the budget’s morality.
(But certainly not it’s sexual orientation.)

Only if AOC concurs

Every president’s budget proposal for at least the last 35 years has been DOA at Congress. I don’t know why presidents even bother submitting them any more.

Trump is doing a fine job of getting the left to go on the record on a host of issues.

I don’t think they care about “the issues”.

Paid family leave is so far down on my list of priorities that I haven’t found it yet. I didn’t vote for Trump so his Democrat daughter and her Democrat husband could shape policy. Get them out of the Administration, Now!

Pelosi and company will insist that women and children and people of color will starve in the streets. Only white men will survive.

PEOPLE ,,, pay close attention to every congress person in your state and how they vote on this. If they vote against it ,, vote them out of public office,,,, if they vote for it then they are supporting & protecting you and your rights,,, keep them in office.

Require work to get ‘paid’ by taxpayers – how more racist, sexist, homophobic, Islamophobic, can Trump get?