Failure to comply could result in punitive measures by way of research funding. 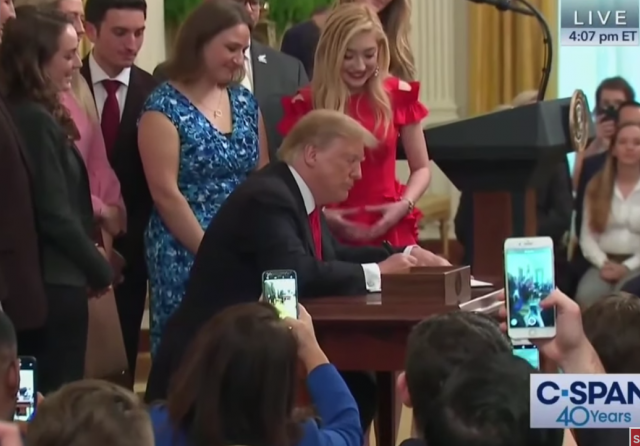 “We’re here to take historic action to defend American students and American values. They’ve been under siege,” said Trump Thursday before he signed an executive order meant to, “enhance the quality of postsecondary education by making it more affordable, more transparent, and more accountable.”

Specifically, the EO targets “free and open debate on college and university campuses.” Failure to comply could result in punitive measures by way of research funding.

From The Chronicle of Higher Education:

The order will direct federal agencies to “take appropriate steps” to ensure that colleges receiving federal research funds “promote free inquiry.” But public colleges are already legally bound to do so by the First Amendment. And private colleges will be required only to “comply with their stated institutional policies regarding free inquiry,” according to Politico, which cited an unnamed senior official in the Trump administration.

The order also will direct the Education Department to do two things: Add program-level outcomes data to the College Scorecard and produce a report examining “policy options” for the idea of risk sharing on student-loan debt.

Inside Higher Ed has a more detailed breakdown:

The executive order essentially directs federal agencies to ensure colleges are following existing requirements. And it doesn’t spell out how enforcement of the order would work.

It will direct 12 federal grant-making agencies to coordinate with the Office of Management and Budget to certify that colleges receiving federal research funds comply with existing federal law and regulations touching on free academic inquiry, a senior administration official said in a call with reporters Thursday morning. The directive doesn’t apply to federal student aid programs.

The administration expects public institutions to uphold the First Amendment and private colleges to comply with their “stated institutional policies” on freedom of speech.

The document will also direct the Education Department to publish program-level data in the College Scorecard on measures of student outcomes, including earnings, student debt, default rates and loan repayment rates, the official told reporters.

And it will direct the department to submit policy recommendations to the White House by January 2020 on risk-sharing proposals for colleges that participate in the federal student loan program.

The executive order puts extra force behind several policies the White House has backed previously. For example, earlier this week the administration released a report on priorities for reauthorization of the Higher Education Act that included program-level data and a new accountability system for colleges.

Full text of the order here:

Can’t wait until Professor Jacobson comments with his analysis on this.

The risk sharing will be what destroys the Democrat Party owned college administrations.

Unlike Obama, he directly handed the actual pen to the young lady.

The missing component of student loans is the kind of risk assessment that goes into a home loan in that if you were to go to a bank instead of guareenteed government loan they would aks some questions abut a “C” High School student that wants to study Gender Studies.

It would eliminate some of the people from just going to college with no idea of a career or really the raw skills for a college educated job who end up being bartenders and paying back a worthless degree.

This is wonderful, and a much-needed step in the right direction!

That said, now President Trump & Congress need to get to work on a bill which demands that our modern Public Square, where discussions take place on the platforms of huge Tech Giants, are also places guaranteed freedom of speech!

How? They have a first-amendment right to control their own platform. And they don’t get any government funding, so it can’t be cut off.

The important part will be on all of us – to question our schools on how they are dealing with this issue. And to reject support when they cannot tell us how they are complying.

Cornell Business School seems to realize that calls are useless and just go for the email approach. I delete all of the spam.

Nice idea if anybody actually follows through and starts withholding funds from the worst abusers – starting with the schools involved in the recent admissions scandal.

Nice idea until first encounter with an Hawaiian Federal judge

No private college could be compelled to “promote” free inquiry by the First Amendment, which at any rate was meant to apply as a restriction on the federal government so… that’s not a very educated-sounding quotation? Any policies they may have regarding free inquiry are simply voluntary. Holding them to the voluntary policies sounds fine to me, it just has zero to do with the First Amendment…

Which quotation are you referring to? I don’t see one that says private colleges are subject to the first amendment.

It seems my wires were slightly crossed while forming my comment, so I’ll rephrase.

Whatever obligations public universities have to promote free speech, it isn’t an obligation to the federal Constitution, obviously. But, if it is a statutory condition for federal funds, by all means, hold them to their word.

When I was in college, freedom of speech was a given. The SDS and the YAF could hold their meetings and invite speakers, and people would listen politely and then ask pointed questions. We never imagined that schools would clamp down on “hate speech” (any ideas that the people in power “hate”), which turned out to be any ideas that weren’t approved by the leftists on campus.

So this is a sad day for educational institutions, which (like the mainstream media) were supposed to be neutral and supportive of all ideas and opinions. Trump’s Executive Order should have been unnecessary. But it IS necessary because our colleges and universities have been discouraging diversity of thought and opinion, while giving lip service to “diversity.”

You kinda nailed it! Freedom of speech movement on campus was to insure radical Leftists got their say, it wasn’t to allow actual freedom of speech, only their speech

If I could up vote your comment a thousand times I would. Yes, those were the days when diversity of thought was encouraged and debated and not labeled hate speech. Good times.

Sadly, laws such as this matter less and less these days. When the Left doesn’t agree they simply don’t comply. IF they get caught…nothing happens to them! So…if I ran a college, I’d continue to discriminate just like I have been…and if I get caught I’d throw a tantrum and call the SPLC so they could shame bring the correct social pressure to bear so that the authorities backed off. Which they would certainly do. And that’s why nothing ever gets any better.

Morris Dees just got pushed out of SPLC. Things are happening.