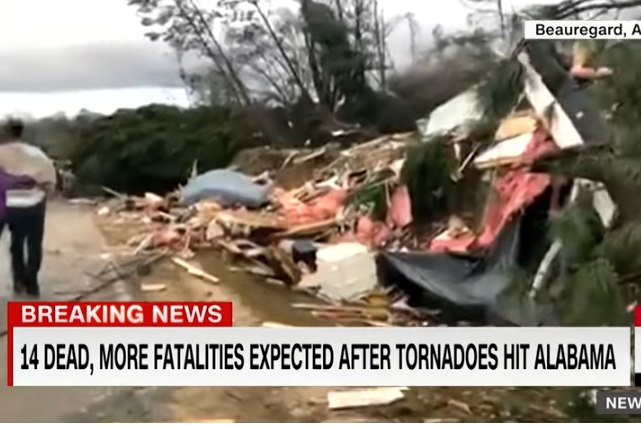 *UPDATE: Authorities have now reported that 23 have died.

Several tornadoes hit southeastern US this weekend, killing at least 14 people in Alabama with officials fearing even more victims will be discovered.

Lee County Coroner Bill Harris told The Associated Press that he has called in help from elsewhere around the state because there were more bodies than his four-person office can handle. Says Harris of the victims in the hard-hit county: “I’d say at least 20 or more.”

Earlier Harris told A.Com that “we’ve still got people being pulled out of rubble.” The coroner added: “We’re going to be here all night.”

Authorities say several tornadoes or possible tornadoes were unleashed by a vast storm system that raked several states in the Southeast on Sunday.

There were 25 tornadoes reported in the South on Sunday, according to analysis from the Storm Prediction Center.

Six to eight people sustained minor injuries, Ereheim said, but there were no known fatalities.

The American South isn’t the only spot that is experiencing unusually harsh weather, either. February 2019 is the first in recorded history during which the temperature in Downtown Los Angeles did not reach 70 degrees.

It came close on February 12, when the weather warmed to 69 degrees. But that turned out to be the high point in a month that brought snow to communities where it hadn’t fallen in years.

Only six other times dating back to 1877, when the agency’s temperature records begin, have temperatures stayed below 70 degrees for an entire month. February’s average high of 61.5 degrees was the eighth-lowest ever recorded and the coldest since 1962.

It is unlikely that we will get much above 5F this afternoon in Boulder, CO, which will obliterate our previous springtime afternoon cold record of 11F on March 10, 1932. Boulder has had 26 spring days since 1895 which failed to reach 20F.

Montanans were greeted by some of the coldest temperatures in the nation Sunday morning, including Great Falls, where the temperature of 32 below shattered the daily low temperature and tied the all-time low for March.

March picked up where freezing February left off, with highs across the region a full 50 degrees below the normal.

An arctic air mass invading from Canada was to blame for the temperatures that broke several cold records across the region.

As a reminder, computer modelling had predicted temperatures so warm that the polar camps would have melted by 2014.

New computer modeling suggests the Arctic Ocean may be nearly ice-free in summer as early as 2014, Al Gore said today at the U.N. climate conference in Copenhagen.

“It is hard to capture the astonishment that the experts in the science of ice felt when they saw this,” Gore told reporters and other conference participants at a joint briefing with Scandinavian officials and scientists, his first appearance at the two-week session.

For those of us who suspect the sun is a stronger contributor to climate impact than cows, I will simply point out the last 31 days have been sunspot-free.

Clearly, the experts and models were wrong. However, attempting to manipulate carbon emissions by regulating people and cows will distract attention and misdirect dollars that could be better spent at emergency weather detection and damage prevention.

Our prayers go out to the people of Alabama, and our wishes for a speedy recovery.

Portland has had a cold dry Spring from the arctic mass pushing east winds down the gorge. But the major contributor to Alabama is likely a jet stream in lower latitudes which allows th cold-dry/warm/wet airmasses to meet further south when the warm air has much greater energy, hence bigger storms. This was the pattern several years ago when those bad storms hit Arkansas. While Kansas and OK have more storms, they are usually weaker in comparison because the gulf air mass has cooled. I haven’t checked recently, but the jet stream’s latitude is often driven by a pacific current off of Peru, which when warmer will push the jet stream north thus lessening storm intensity. Not sure how man controls a huge pacific current, but I am sure politically driven climatologists are on it.

Tornado season is 365 in Alabama. When I lived in Montgomery, one touched down down the street from my house. On Christmas day. Luckily, none ever got closer than that.