Maybe it’s time for SPLC to designate itself a “hate group.” 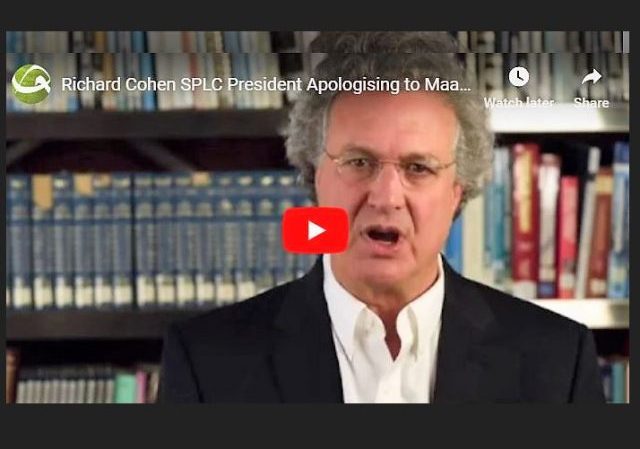 Morris Dees, one of the co-founders of the Southern Poverty Law Center (SPLC), recently was fired for unspecified misconduct.

You can scroll through my posts about the SPLC dating back to 2009, including:

I was quoted in a Politico article about the SPLC in January 2017, and it pretty much summed up my view:

So I was happy when Dees was fired, as quoted in The New York Times:

“I am glad to see Dees leave S.P.L.C., whatever the reason,” William A. Jacobson, a professor at Cornell Law School and an outspoken critic of the group, said on Thursday.

“S.P.L.C. long ago focused on combating the Ku Klux Klan, but then abused the reputation it earned for those efforts by demonizing political opponents through the use of hate and extremist lists to stifle speech by people who presented no risk of violence,” Mr. Jacobson said.

Reports after the firing indicate there was a culture of racism and sexism at SPLC which Dees either engaged in or tolerated. The loss of Dees was a body blow to SPLC’s public image, and the hits have kept coming.

Bob Moser, who used to work at SPLC, wrote at The New Yorker that SPLC was “a highly profitable scam” in which sexism and racism were widespread:

In the decade or so before I’d arrived, the center’s reputation as a beacon of justice had taken some hits from reporters who’d peered behind the façade. In 1995, the Montgomery Advertiser had been a Pulitzer finalist for a series that documented, among other things, staffers’ allegations of racial discrimination within the organization. In Harper’s, Ken Silverstein had revealed that the center had accumulated an endowment topping a hundred and twenty million dollars while paying lavish salaries to its highest-ranking staffers and spending far less than most nonprofit groups on the work that it claimed to do. The great Southern journalist John Egerton, writing for The Progressive, had painted a damning portrait of Dees, the center’s longtime mastermind, as a “super-salesman and master fundraiser” who viewed civil-rights work mainly as a marketing tool for bilking gullible Northern liberals. “We just run our business like a business,” Dees told Egerton. “Whether you’re selling cakes or causes, it’s all the same.”

Co-workers stealthily passed along these articles to me—it was a rite of passage for new staffers, a cautionary heads-up about what we’d stepped into with our noble intentions. Incoming female staffers were additionally warned by their new colleagues about Dees’s reputation for hitting on young women. And the unchecked power of the lavishly compensated white men at the top of the organization—Dees and the center’s president, Richard Cohen—made staffers pessimistic that any of these issues would ever be addressed. “I expected there’d be a lot of creative bickering, a sort of democratic free-for-all,” my friend Brian, a journalist who came aboard a year after me, said one day. “But everybody is so deferential to Morris and Richard. It’s like a fucking monarchy around here.” The work could be meaningful and gratifying. But it was hard, for many of us, not to feel like we’d become pawns in what was, in many respects, a highly profitable scam.

The Times has also learned that the organization, whose leadership is predominantly white, has been wrestling with complaints of workplace mistreatment of women and people of color. It was not immediately clear whether those issues were connected to the firing of Dees, who is 82.

A letter signed by about two dozen employees — and sent to management and the board of directors before news broke of Dees’ firing — said they were concerned that internal “allegations of mistreatment, sexual harassment, gender discrimination, and racism threaten the moral authority of this organization and our integrity along with it.”

In a public statement, Richard Cohen, president of the SPLC, announced that an outside organization would be hired immediately “to conduct a comprehensive assessment of our internal climate and workplace practices, to ensure that our talented staff is working in the environment that they deserve — one in which all voices are heard and all staff members are respected.”

Now Cohen is gone, in a resignation in many ways more devastating to SPLC than Dees’ firing, because Cohen has run the SPLC for the past two decades. The L.A. Times reports on Cohen’s resignation:

The president of the Southern Poverty Law Center, Richard Cohen, announced his resignation Friday, the latest in a series of high-profile departures at the anti-hate organization that have come amid allegations of misconduct and workplace discrimination.

The departure will mark the end of an era at the Montgomery, Ala., nonprofit, whose staff had recently raised questions about whether the organization’s long-standing mission of justice and anti-discrimination — which had yielded hundreds of millions of dollars in donations from the public — had matched its internal treatment of some black and female employees.

“Whatever problems exist at the SPLC happened on my watch, so I take responsibility for them,” Cohen wrote in an email obtained by The Times, while asking the staff to avoid jumping to conclusions before the board completes an internal review of the organization’s work culture.

Cohen’s resignation comes the same day as a resignation by the organization’s legal director, Rhonda Brownstein, who did not give a reason for her departure in a brief email to her colleagues. Brownstein did not respond to requests for comment.

SPLC has destroyed lives and contributed to the stifling of speech through false or politicized designations of political opponents as “hate groups” or “extremists.”

Maybe it’s time for SPLC, which nurtured an internal culture of racism and sexism, to designate itself a “hate group.”

May it continue to implode! And quickly!

With the numerous special and peculiar interests invested in the diversity racket, we should expect an Ouroboros effect, where consumption is progressive but approaches a singularity of enormous influence. A kind of political and social black whore… I mean, black hole.

Now, about that IRS audit of SPLC, including its multi multi-millions in offshore holdings — how they were solicited, and how the money was transmitted overseas.

It could well be that the SPLC was the inspiration for the Clinton Foundation.

Men and women are equal in rights and complementary in Nature. Reconcile.

Don’t indulge in diversity (i.e. color judgments), which are based on low information attributes (e.g. skin, sex), and inference from signals with progressive fidelity.

People who live in glass houses………..

should keep their underpants on.

Well done Professor Jacobson! Your efforts over the years of exposing SPLC have finally borne fruit. It’s now time for the IRS to audit SPLC and for SPLC to cease operations. SPLC’s millions in offshore accounts should be repatriated to the U.S. and dealt with in accordance with the law.

As to the SPLC being a scam, there’s been a saying in certain parts of the Left for many years. The saying is, “Doing well by doing good.”

What it means is that “social justice” can be extremely profitable, though they try to make it sound less cynically self-serving than that.

“Maybe it’s time for SPLC, which nurtured an internal culture of racism and sexism, to designate itself a “hate group.””

Even if they don’t make that designation, the rest of us will.

SPLC was not completely about hate, their primary motivation being a love of easy money.

In my true devotion to diversity, I am recommending that a heterosexual, conservative, meat-eating Jewish white male assume the leadership of SPLC, provided that he is an NRA member and always wears a MAGA hat.

These dishonest, self-serving quacks need to be shutdown.

Did. Cohen take the passcodes for the off-shore accounts with him?

They aren’t going to go away. What they will do is hire a bunch of angry black lesbians to run things.

How big is the SPLC scam?

“Mainstream technology companies such as Google and Amazon have enlisted SPLC to help compile, track, and vet organizations based on alleged extremist activity. For a short time, charity aggregator Guidestar used SPLC’s hate group listings to apply so-called warning labels on 46 nonprofit organizations, but later removed the labels amid a heavy public backlash against its reliance on SPLC.”

The SPLC trades in hate.

Hate is inventory to the SPLC.

It has always been a hateful organization.

The notion that it arrogates unto itself what constitutes hate is laughable.

Moser’s article also mentions the fact that Dees started the organization as a business with the object of making a lot of money. The Klan was a useful target. He quotes Dees as saying “It was like shooting fish in a barrel.” The Klan was moribund. It had no power. Dees resurrected it to have an easy target and make a lot of money.
The SPLC is a fraud. It began as a fraud. It’s still a fraud. But it still makes a lot of money.