School bus aide yells at 14-year-old over Trump hat, removes it from his head

School bus aide yells at 14-year-old over Trump hat, removes it from his head 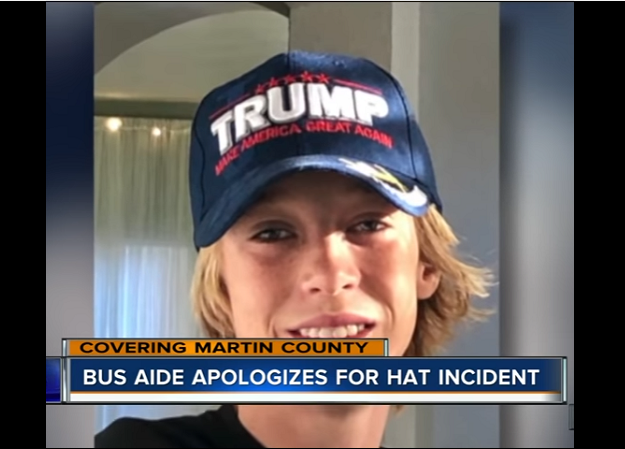 Another day, another TDS-addled adult bullying a teenager over a Trump hat.  This time, it’s Palm City, Florida where a female bus aide repeatedly yelled at a 14-year-old male student to take off his hat before eventually physically removing it from his head.

The student was wearing the hat for “hat day,” and the school reportedly has no policy restricting political apparel.

Surveillance video on a Martin County school bus shows a bus aide yelling at a student to take off a Trump hat, then grabbing it off of his head.

Now, the Martin County Sheriff’s Office is investigating whether the bus aide committed a crime.

Gunnar Johansson, 14, said this week, students were allowed to wear a hat to school if they made a donation to March of Dimes.

He decided to wear a Trump, Make America Great Again hat, “to show my pride in Trump America,” Johansson said.

He boarded his bus to Hidden Oaks Middle School, and within seconds, the bus aide can be heard talking to Johansson.

“I was really confused, I was like ‘I can’t wear this?’ “Johansson said.

The bus aide is heard telling the teenager to put his hat in his backpack, and continuing to tell him to take it off.

“She, like, threatened me with a referral and threatened to turn the bus around. I said ‘write me up, I didn’t do anything wrong’, and then she yanked my hat off. It was crazy,” Johansson said.

The police are investigating the incident, focusing on “the interaction directly, physically with the child and how that panned out,” WPTV reports.

The bus aide has since apologized, explained that she overreacted, and expressed her hope that the student will forgive her.

It’s puzzling to me that adults can be so triggered by children wearing hats supporting the duly-elected president of these United States.  I can see being offended by something someone is wearing; I’m not a fan of novelty tees with vulgar images on them, but it would never occur to me to say anything to the person, much less to screech at them and rip it off their back.

There have been so many incidents of people being triggered by MAGA hats that it’s truly confounding.  When it seemed that every college student and aging hippie in America was sporting Mao or Che tees, I don’t recall anyone screaming at them or attempting to remove the garment from their person.

These anti-Trump culture warriors have to know that it’s not okay to verbally and, in some instances, physically assault people for wearing MAGA gear, but they feel entitled to do it anyway.  We’ve reached a point at which the legally- and socially-acceptable have wildly diverged from the culturally-acceptable.

Hopefully the woman will be charged with assault.

What! For being a resistor ? Not likely.

She’s more of a transistor that was switched by a red pulse.

Yeah, I’m getting cynical about our justice system too. Well, there’s always a civil suit for depriving the kid his Constitutional right to free speech.

Because the woman in question was a “school bus aide” (whatever that might be), I assume she is a gov’t employee of some sort, and this would constitute a suppression of speech under color of gov’t authority, and thus a Constitutional infringement. I hope the kid sues her and the school district.

Resistor to what, a teenager wearing a Trump hat? Wow, so brave. Or stupid. Yes, that’s the word I was looking for, stupid.

“and expressed her hope that the student will forgive her.”

Too many of these idiots, no forgiveness. Fire her ass.

I suspect her request for “forgiveness” came a few minutes after her interview with the police ended.

Yes ma’am, you over-reacted. It’s good that you apologized. Whether the student and his family will forgive you I do not know, but you will still answer to the law.

Whether they charge the driver or not with a crime, the civil lawsuit is going to be massive.

Getting cold-cocked by a students’ dad …

If that was MY kid?

What re-education camp is she going to be sent to before being allowed to drive a bus again? /s

Oh how times have changed since “Jimmy, our bus driver” on News from lake Wobegon.

Dang, I can’t find a pointer for an mp3 url. PBS used to have all of the News from Lake Wobegon podcasts up and I downloaded as many as I could. You could get about a year’s worth of mp3s on a CD. Put it on while driving long distances and literally laugh the entire trip, 3, 4, 6, 12 hrs. Yes, I completely disagree with his politics, but dang, he tells a good story. And the funny part is, when you listen to the values that he was raised with, that he is not that different from many of us. I wonder if he just spouts the other crap to keep his day job.

NPR removed all of Garrison Keillor’s broadcasts in the wake of the #metoo allegations against him.

Garrison was purged from the Left’s pantheon. His “sexual misconduct” his downfall. “Redemption” and true forgiveness are never to be considered. The terrible faults of those in the Left are diluted or ignored. Responsibility without accountability at most.

Let me guess what color she was! I’m offended by everyone who leans just left of Center of the line….

The attacker was of a female ebonics-accented speaker.

If you are “triggered” by someone’s apparel, then you are the one with issues not them.

The child in the equation is the moron bus aide, who should promptly be fired and then charged with assault.

This is getting way past tiresome.

The fact her race is not mentioned is telling.

But the voice has an ebonics accent.

Blonde, white Republican vs an unknown race lower class “bus aide.” She looses her job permanently and goes back to WMart. Gunnar (great name) stuck to his story with his Mom on Fox this morning — I was proud of him.

Does anyone doubt that these examples of unhinged leftards represent the underlying hate shared by most of the left for their political opponents? Does anyone doubt what they have in store for those opponents should they ever attain complete power?

It’s MUCH worse than you know.

BREAKING: The Brains Behind Alexandria Ocasio-Cortez (If this doesn’t wake you up, you’ve surrendered your freedom):

Everyone should watch this video. It’s an eye-opener to what’s going on behind the scenes on the Left.

A school bus “aide”? The hell, you say. What credential is required to act in the capacity of a school bus bully?

Ignorant woman has met her full potential in life and never even saw it coming. The advanced course will qualify her to become a chamber maid or maybe even a free-lance chicken crowder at poultry processing facility.

Keep up the good work lefties! Your doing the dirty work for the conservatives, all at the behest of the MS Media who for some reason can’t see what they are promoting! They keep dialing it up and the punishment keeps coming!

Now that this MAGA hat snatching mental disorder has arrived in Texas it will not be long before one of these little triggered SJW types gets their empty head blown off.

If the left cannot support their views, opinions, and policies with sound logic and solid data, they resort to demonizing the opposition – name calling and labeling like; racist, white supremacist, Nazi, denier, etc.

If that doesn’t work, they then try to silence the opposition.

It they really have no defendable position; they go to the next step and attempt to criminalize the opposition.

You can discern from their strategy the soundness of their ideology..

That’s what the Brown Shirts did.

Touch my child , I”LL TOUCH YOUR FACE ,,, and my size 12 boot will have to be surgically removed from your backside !!!!

The aid is only apologizing to save her butt.