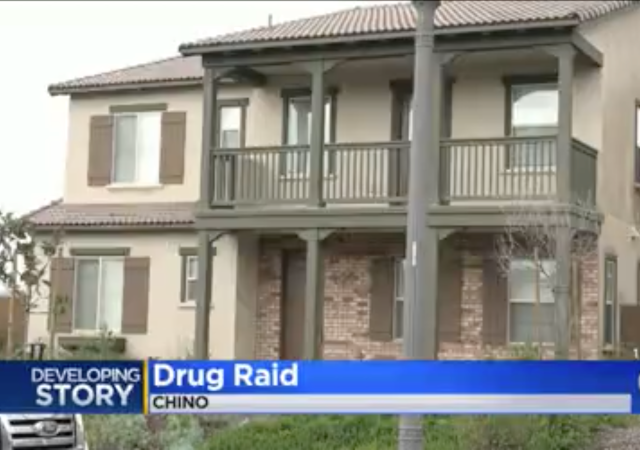 Late last year, I reported that fentanyl from China kills over 29,000 Americans annually.

Now it appears that China wants to expand its drug-pushing options. A California realtor has been arrested for converting homes into “grow houses” for marijuana with millions from the Asian nation.

The arrests come after a 14-month investigation into the men, whose roughly 1,650 weed plants were seized Thursday morning at grow houses in Chino, Chino Hills and Ontario, the U.S Attorney for the Central District of California said in a news release. Prosecutors said they also seized at least $80,000 in cash raiding the home of the man accused of orchestrating the scheme.

Prosecutors said 37-year-old Lin Li, a real estate agent who goes by Aaron and lives in Chino, was the domestic mastermind of the operation, while 42-year-old Ben Chen of Alhambra tended to the marijuana plants and 44-year-old Jimmy Yu of Pasadena helped as a caretaker.

The case against Li brought by the prosecutors reads like a Chinese version of “Breaking Bad”.

After receiving financing from China, Li “acted as the Realtor for the purchase of (seven residences), which he then converted into illegal marijuana grow houses,” the affidavit alleges. “Li coordinated the purchase of the properties, managed them after purchase, paid their utilities and taxes, and established shell companies for the purpose of managing the properties’ finances.”

Investigators believe Li attempted to distance himself from the conspiracy by using Chen and Yu to manage day-to-day operations, to help with out-of-state distribution of the marijuana, and to return marijuana sale proceeds, according to court papers.

China might be pre-planning to fill an impending void in a new market, as the incipient legalized cannabis industry in the Golden State appears to be facing an extinction-level event because of all the regulatory complications imposed by Sacramento.

Once, the cannabis industry was poised to become a multibillion-dollar industry in California. Now, it could be heading for what its advocates call an “extinction event.”

An estimated 10,000 marijuana growers could lose their licenses in the coming months if California lawmakers fail to pass a bill designed to grant them an extension, according to Sen. Mike McGuire, D-Healdsburg, who has sponsored Senate Bill 67.

“The bottom line is this: This bill is going to protect thousands of cannabis farmers, in particular, who did the right thing and applied for a state license after the passage of Prop. 64 but their temporary license is about to expire,” McGuire said in a hearing on his bill.

Under Proposition 64, California regulatory agencies were authorized to grant cannabis businesses a temporary license, good for 120 days and eligible for a 90-day extension. In the event of unanticipated delays in becoming compliant with the California Environmental Quality Act, a temporary license holder also could apply for a one-year provisional license.

There seems to be lots of plausible deniability for the Chinese government in this case. They may have learned these tricks from the Brits.

Or, it could simply be the usual story, that big pots of money held by a government become targets for the kind of people who will do anything for money.

California: The place where plants reside in the houses, and the people live outside.

This will put Chinese businesses in competition with the cartels. What could go wrong? On the other hand, large swathes of California already resemble the Third World countries China knows how to exploit so maybe things have already been worked out.

A female police officer with whom I work at LAPD told me she was renting out her house. Her husband is in the Marines and was stationed in Okinawa. She was pregnant at the time (last year) and moved in with her mother and sisters who wanted to pamper her. She worked until a week before giving birth (not on patrol, but in the office).

It was during this time a few weeks before she had the baby that her husband came back for a short visit. They went to the house they owned and found it completely full of marijuana plants. The renters had converted it into a giant greenhouse. They weren’t actually living there.

I’ve only seen her a couple of times briefly since she had the baby because she’s working a different shift now, and we just talked about her baby. But at the time she told me she was adamant about selling the house. She said she wouldn’t feel safe living there with the baby after being the one responsible for ruining their entire crop.

The most important question is: “How many politicians were paid off for this? Is it on? Dozens? Hundreds? How many law enforcement officials? Bureaucrats? Business people?

The US establishment has become one big international crime cartel.

The house where magic dragons puff. The Chinese are familiar with the costs and benefits of psychogenic drugs and mental suppressants. Still, judge them by their outcome.

The thing is, the power companies can tell you exactly where the grow houses are. Four bedroom houses do not consume 10000 KWH a month. And their equipment can even detect in real time if power to a neighborhood is being siphoned off before the meter. I used to live next door to a grow house in the pre-legal days in Portland. Had a 12″ fan running 24/7 to vent the drying room. I reported it to the po-po but nothing happened, and numerous other neighbors did as well. The house was foreclosed in 2008 and when a company came to rehab it, the guy stopped at the door and immediately called his company for legal advice since it was wall to wall plant stalks in pots in all rooms. He didn’t even want to cross the threshold.

Smart foreclosure guy. Sometimes the grower is still inside, and a little reluctant to give up his plot.

Utilities can determine which *neighborhoods* are using more power than their billing numbers indicate, but the bypasses can be sophisticated widgets that are hard to detect. However, they show up on infrared like torches, thus leaving the cops with the dilemma of enforcing against the growers and getting shot at or pulling over speeders and writing tickets in peace.

Last week, Seattle Police busted 5 happy ending massage parlors dealing with women brought in from China as indentured servants to work these places. They estimate there’s about 37 of these shops across the city.

The US is turning into a democrat paradise for criminals. I’m sure the dems will excuse the illegal activities.