Wage growth is one bright spot in a dismal jobs report. 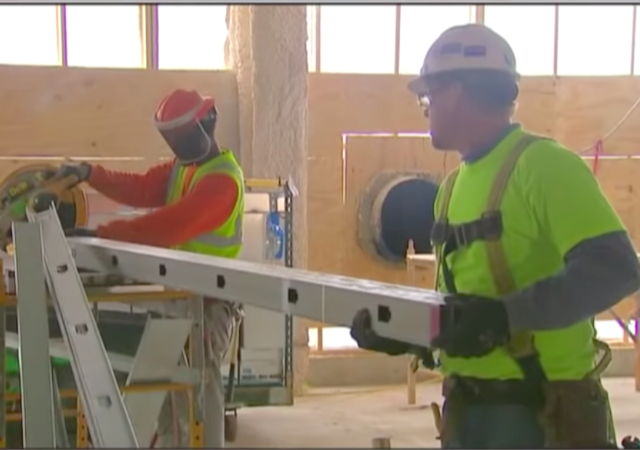 However, the unemployment rate fell to 3.8%.

Some of the pullback in February hiring was likely payback after back-to-back months of strong job gains. Revised figures show employers added 311,000 jobs in January and 227,000 in December, a net upward revision of 12,000.

A tighter labor market, in theory, should also translate into faster wage growth, as employers compete for scarce labor. Friday’s report showed that is materializing: Wages rose 3.4% from a year earlier in February, a pace last matched in April 2009.

Business-services glowed in the jobs report as that sector added 42,000 jobs. The healthcare profession added 21,000. Construction jobs took a hit since it only added 31,000 jobs.

According to CNBC, “leisure and hospitality, a key component of the recovery, was flat for the month.”

Retail loss does not shock me as I have seen numerous stores announcing cutbacks and closures. The latest one is Charlotte Russe.

Let’s look at unemployment, which has various measures. The broadest measure that fell the most was part-time workers looking for full-time work from 8.1% in January to 7.3% in February. This could be because of the partial government shutdown in January. 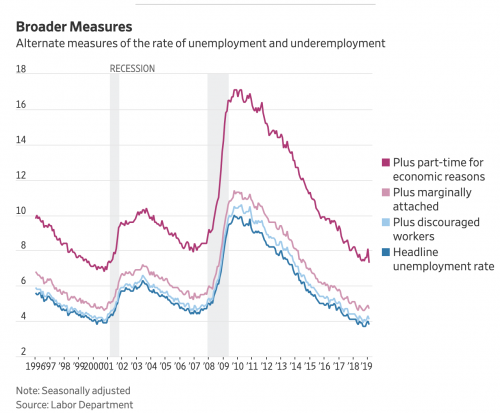 Wage growth is one of the bright spots in the jobs report as it went up 3.4% from a year ago, which is “the fastest pace since April 2009.” Since inflation has slowed down, “real wage gains are now increasing once again.” From The Wall Street Journal:

Yes, the 20,000 figure was a big miss. But Robert Frick, corporate economist at Navy Federal Credit Union, points out that the overall trend still looks solid.

“The average for the last several months still reflects jobs are being added at a strong 180,000 per month rate. And more importantly, wage growth was the highest of the expansion with average earnings for private workers up 0.4% month over month, showing American workers are starting to collect more of the gains of the expansion,” Mr. Frick said in an email. 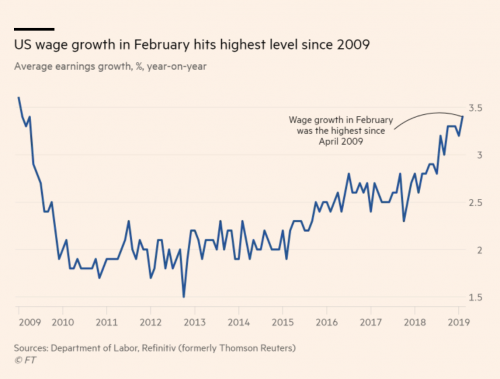 This could change next month as the numbers usually do:

Analysts are scratching their heads over February’s job’s growth number, questioning whether the government shutdown earlier this year or a major snowstorm somehow altered the numbers.

“You can say this is not consistent with what we’ve seen from earnings,” said Tony Roth, CIO of Wilmington Trust.

Despite the headline jobs number miss, unemployment ticked lower and wages rose to their strongest pace in nearly a decade.

“We expect the number to be revised upwards. It’s a headline number, an anomaly,” Mr. Roth added.

Just like Jan 2007 when Democrats took over, recessions begin.

1 – Where are the chains or stores located that are being closed or scaled back? Are they in the states that imposed the $15 minimun wage rules? Are the owners moving into other more profitable ventures and dropping their less profitable models?

2 – Dollar General is one of the stores scaling back. Their big scale up was during the Obama era when folks were broke. Folks still need their basics, but with the economy improving are they able to shop in nicer stores again?

I believe it’s “Family Dollar” and their tie in with ” Dollar Tree” who are closing and restructuring. Not “Dollar General” who are expanding in the small market area outside of the urban areas.

notamemberofanyorganizedpolicital in reply to 2nd Ammendment Mother. | March 8, 2019 at 4:43 pm

The numbers are just plain wrong. Even more than usual. Look at the revisions for the last two months. They are just fitting the curve to their narrative. Nothing new.

notamemberofanyorganizedpolicital in reply to Pasadena Phil. | March 8, 2019 at 4:44 pm

Just like the FED-MSM Complex have been trying to cause a Recession for the past couple of years.

Rick the Curmudgeon in reply to notamemberofanyorganizedpolicital. | March 9, 2019 at 7:23 pm

Not to worry; I’m sure the Fed will schedule another interest hike about a year from now to wreck the economy through November 2020.

According to FBN, the household survey shows much stronger numbers. The media seems to always focus on the weaker indicator.

February is the first month measured after the Democrats took control of the House. February was also when Amazon pulled out of NYC.

This is nothing more than a seasonal adjustment if you consider the weather pattern of extremely cold temps in even the warmest states these past 12 weeks. The drop in employment numbers is not outside the norm of what happens every year. The “non-climate change factor for infrastructure”. The fact that manufacturing and services continue to produce and employ is testament of why the numbers stay in a sustainable growth pattern as reported.

Well, if you count snowplow drivers, numbers are *way* up….

Remember, remember the 5th of Octember,

2012. The last unemployment report before the election and the massive, unprecedented dip in the unemployment rate of .3% in one month, that miraculously dropped the rate below 8%.

The Census bureau manipulated numbers to affect an election. Since nothing came of it, I cannot pretend that they have stopped.

We can “pretend that they have stopped.”

I don’t ever believe those Leftist-Globalist Democrat Party sources.

Things like a recession won’t budge Trump voters: we’ve been around too long to understand cycles and the like, and the sabotage Odumbo/Jarrett inserted into the economy during the economic “crisis” that came up under the Odumbo/Jarret disaster.