Tucker Carlson: “CNN is not a news outlet. It’s a super PAC.” 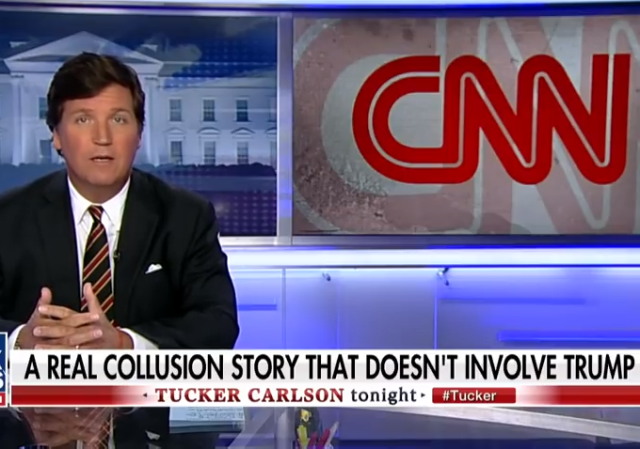 The liberal bias of CNN is so obvious that it has gotten to the point where people joke about it. Yet as Tucker Carlson demonstrated on his show on Wednesday night, it is a serious issue.

Carlson showed how talking points move from the lips of Democratic party leadership, to the stories that lead CNN prime time programming.

He began by pointing out that with the collapse of the Mueller narrative, CNN had a huge programming void to fill. He then played a clip of Nancy Pelosi speaking to reporters on Monday, declaring that Democrats were going to focus on healthcare – as they always have – and that she hoped the press would focus on these issues.

Then came the astounding part. Tucker walked through a sampling of clips from CNN’s prime time programming and what was everyone talking about? Healthcare, of course.

Tucker specifically noted that every single CNN show from 7 pm to midnight followed suit, and that it began again at 6 am Wednesday and continued throughout the day.

This has to be seen to be believed, watch the whole thing below. Is there any wonder why the left is working so hard to get Tucker taken off the air?

After watching this, I decided to go back to CNN’s Twitter feed from Tuesday night into Wednesday and sure enough, it’s all there:

Here’s what happens if the courts kill Obamacare https://t.co/Ezp12T1Qpd pic.twitter.com/dTWH5VVieF

.@ChrisCuomo: “This President and his party have no plan to provide care to tens of millions if the (Affordable Care Act) is gone.” https://t.co/le8yriQw48 pic.twitter.com/gd21xWTSCs

Democrats turn their attention to defending Obamacare as Congress waits for the Mueller report https://t.co/DncY8WhLrl pic.twitter.com/eQ2XKbQVJ9

“It is something that we come to expect: That he will say one thing and when the circumstances suit, he’ll switch.” https://t.co/PJzEiLhVFu pic.twitter.com/k1dIMB7s7X

A White House official tells CNN that there has been a heated debate inside the Trump administration on whether the Department of Justice should support a ruling fully invalidating Obamacare. @joejohnscnn reports on the latest: https://t.co/UHPqUDlIvf pic.twitter.com/IISa9Md1xq

In a dramatic reversal, the Trump administration says the entire Affordable Care Act should be struck down https://t.co/Xu2VKYxUsn pic.twitter.com/R0cROIWptA

This is the same network that accuses FOX News of being “state TV” for not being completely anti-Trump.

It was, once again, a masterful presentation by Carlson. I’m working on not missing his program. Don’t always agree with him, but he’s far more often right than wrong.

I didn’t hear the MSM complain that most Obamacare insured now face sky high premiums and perpetual sky high deductibles for what is essentially catastrophic insurance – essentially HSAs with none of the advantages of HSAs. None of the MSM stories examine the real problem, because that would require a too much work and thinking for the media, and would keep them from their real objective, left wing propaganda. It won’t work; this is a subject which people want to see real solutions.

It would be great if someone “erased” Obama, shortly followed by Obamacare.

Never forget this is the same network that turned a blind-eye to Iraqi atrocities so that they could stay good with Saddam and his crew.

All I can say is why did it take so long for him to notice this? For decades the DNC has dictated the slant and direction and even most of the specific wording of the media.

If you flip channels you can hear they use the same key phrases which mirror the Democrat politician’s words. If one of the DNC agents of the day, also called Politicians, use a catchy phrase, such as “the noose is tightening”, you hear it over and over with little variation on all the network news channels.

There used to be some care used to cover up the direct ties from the DNC talking points to the media, but they don’t even bother to hide it any more. And it isn’t just the TV news, it’s the various liberal rags which call themselves newspapers.

When I have called them a propaganda machine, it is because of this action as noted by Tucker which has been going on a very long time.

Just think of the coverage Obama got, regardless of the scandal of the day with him, and compare it with any Republican since Reagan’s day in office. Peanut man got passes for his horrendous handling of the country, Clinton was excused for his behavior and got away with impeachable offenses because of the Network News propaganda telling people what to think, Nixon would have gotten away with Watergate (as we have been seeing play out so far with Obama doing actions far worse than what Watergate was) had he been a Democrat, all because the propaganda machine would work overtime on shaping public opinion over reporting the news without the spin.

Hey, I appreciated free peanuts which were available in the waiting rooms of several members of Congress.

I used to wonder just how a story on “60 Minutes” on Sunday translated to the introduction of legislation on Monday along with 3-4 minute segments on the Evening News.

You have to break it to find out what was in it.

Stunning when it’s all put together like that. Stunning and absolutely impossible to ignore.

I’ve never been a big fan of Tucker Carlson but that is great work and a service to the public. Well done Tucker.

Listening to the radio this morning on the drive and the local DJ was reading some news. She mentioned Trump’s plan to replace Obamacare with something better. After delivering that piece of “news”, she said that the last time Republicans talked about replacing Obamacare they lost the House. Media at every level, national and local, are in on the talking points.

Medical care, including progressive costs and shifting. Health care includes the right diet, the right behavior, and the right habits.

I made the following comment there yesterday:
Why is a CNN analyst focusing on the 8%-rated “Healthcare”? Because it’s important to CNN – they think it’s an agenda item they can use to try to help defeat DJT In 2020. “Trump wants to take away grannie’s meds. Trump wants to put grannie in the street because she can’t pay her medical bills. Trump wants to throw grannie under the bus after he’s thrown her down the stairs.” Concern for immigration isn’t an issue they think they can use to help defeat Trump. And while they may be correct when they presume that most of that 20% would side with Trump on the issue of immigration, they may be wrong when they presume the 8% concerned with healthcare are AGAINST Trump. It’s quite possible that a sizable portion of the 8% consider it an important topic because they’re afraid of what the Democrats may do to ruin healthcare in America! Healthcare isn’t necessarily a winning agenda item for the left. If they believe it is, they will fall all over themselves to propose more and more radical changes to healthcare, and probably end up scaring the bejezus out of more people than they attract.﻿

The dems push to end private insurance certainly scares the crap out of me – I read about what the British NHS is like.

I’d be okay with the death panels of obamacare perusing the dems health charts and making specific recommendations for them.