Eric Holder won’t run, but said he will do whatever he can to elect a Democrat in 2020. 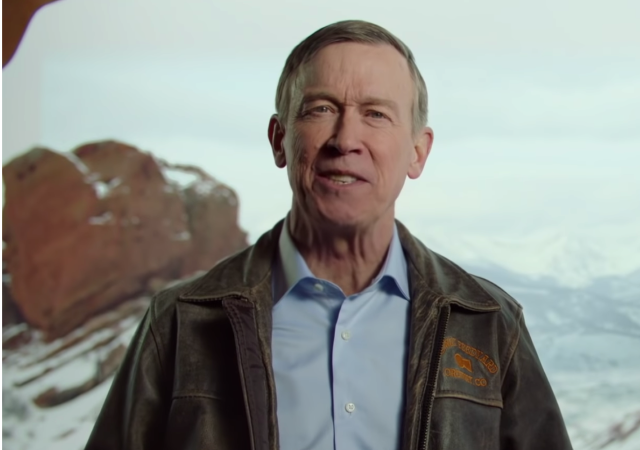 Former Colorado Democrat Gov. John Hickenlooper announced Monday morning that he decided to jump into the 2020 presidential race because the country is “facing a crisis that threatens everything we stand for.”

At the same time, former Attorney General Eric Holder wrote in an op-ed that he will not run for president.

“I’m running for president because we’re facing a crisis that threatens everything we stand for,” Hickenlooper says in a taped announcement while the image of President Donald Trump flashes across the screen. The two-minute video was to be emailed to supporters before dawn.

“I’m running for president because we need dreamers in Washington, but we also need to get things done,” Hickenlooper adds. “I’ve proven again and again I can bring people together to produce the progressive change Washington has failed to deliver.”

He will hold an official kickoff rally Thursday at Civic Center before leaving for two days of campaigning in Iowa, his campaign said. The rally will include a performance by Nathaniel Rateliff & the Night Sweats.

He was one of the last people on the list for failed Democrat presidential candidate Hillary Clinton’s running mate in 2016. She chose Virginia Sen. Tim Kaine.

The Denver Post reported that Hickenlooper will talk about his policy goals at the rally while reminding people of “his economic accomplishments in Colorado, especially workforce development.” From NBC News:

In a video released Monday morning, Hickenlooper says his campaign would center on taking action on key issues like guns and climate change, but also in “repairing the damage done to our country.” In a voiceover over footage of Trump, he says, “I’m running for president because we’re facing a crisis that threatens everything we stand for.”

Hickenlooper recalls being “a skinny kid with Coke -bottle glasses and a funny last name,” adding that because of those traits “I’ve stood up to my fair share of bullies.”

But while Hickenlooper seems ready for a fight with Trump, his introductory video also leans into his history of being able to “bring people together,” especially during his two terms as governor of Colorado. He touts crafting environmentally friendly methane emissions laws in tandem with environmentalists and oil and gas companies; expanding Medicaid in Colorado; and passing tough gun control legislation after a mass shooter killed twelve people in Aurora.

Policy may not remain a top priority as the team may concentrate on his electability:

Hickenlooper’s biography and his record as a governor who has worked toward bipartisan accomplishments have been appealing to Iowans, even if they’re holding back on choosing a candidate in these early days.

Hickenlooper is a long shot for the nomination, political observers suggest. However, Democrats have had success with governors such as Bill Clinton and Jimmy Carter in the past.

“He’s not in the top tier just yet,” said Seth Masket, a political science professor at the University of Denver who has written about the 2020 field for the national news site FiveThirtyEight. “But there is a rationale for his candidacy. The top tier of candidates consists mostly of liberal senators. The idea that he might be more competitive in a general election is something people are going to take seriously.”

Throughout 2018, Eric Holder faced questions about a presidential run in 2020. He said he was interested, but never gave a straight answer.

Holder wrote in The Washington Post that he will not run for president in 2020, but will work hard to elect the Democrat nominee:

Though I will not run for president in 2020, I will continue to fight for the future of our country through the National Democratic Redistricting Committee and its affiliates. For too long, Democrats have lost sight of the state and local races that shape the day-to-day lives of the people we serve. With state legislatures set to begin drawing new voting districts in 2021, what happens in those races over the next two years will shape the next decade of our politics. Our fight to end gerrymandering is about electing leaders who actually work for the interests of the people they are supposed to represent. I will do everything I can to ensure that the next Democratic president is not hobbled by a House of Representatives pulled to the extremes by members from gerrymandered districts.

Holder then provides tips for Democrat voters on how to choose their nominee, which include integrity, honesty, and a clear vision. That’s kind of funny considering the ATF ran Operation Fast and Furious under him, which led to the death of Border Patrol Agent Brian Terry. Another gun running scheme led to the death of ICE Agent Jaime Zapata.

He did not endorse anyone, but will fight to get a Democrat elected in 2020. This makes me think he won’t become outspoken as much until after the Democratic primaries. However, in my opinion, he should just go away.

Not only did those horrendous gun operations happen under his watch, but Holder cheered when current Colorado Gov. Jared Polis said he will sign a bill that bypasses the Electoral College. You know, an integral part of our republic, which allows everyone to have a voice and not just those in California, Florida, New York, or Texas.

Isn’t LickenHolder one of the Biggest Bullies in the Democrat Party?????? Snark.

“I’m running for president because we’re facing a crisis that threatens everything we stand for,”. Smiley face communism?

notamemberofanyorganizedpolicital in reply to Whitewall. | March 4, 2019 at 3:32 pm

How Big a MONEY CUT does the Un-Democratic Party get from all their Runners?

Hickenlooper? Yeah.. good luck with that.

notamemberofanyorganizedpolicital in reply to Sanddog. | March 4, 2019 at 3:34 pm

They have the crisis. Their train to utopia is on the siding right now. They see the(ir) world coming to an end… any conservative interference shortens to time to end of world in their mindset.

notamemberofanyorganizedpolicital in reply to LisaGinNZ. | March 4, 2019 at 3:35 pm

He must mean the Massive, (Off the Cliff) Drop in Bribes………. er “donations” to the Un-Democratic Party.

Your guess is as good as mine.

The sinister Eric Holder not running? What a shock.

Lickenpooper has been a mixed bag as Colorado’s governor. As a former petroleum geologist he has been active in advocating for our oil and gas industry, which is one of the largest drivers of Colorado’s economy. Other than that, he is a typical Democrat. He may currently be less radically socialist than the others, but party trumps person, and I expect he will veer left when the party bosses demand that.