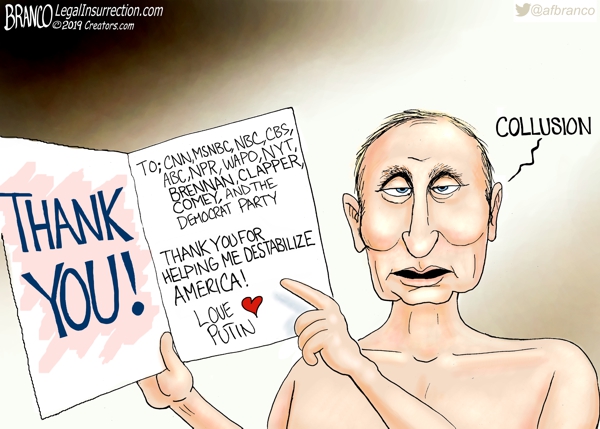 Democrats and the DNC propaganda machine AKA the MSM have been doing this for ages. This cartoon nails the true source of “collusion”. Given that Herr Mueller was supposed to investigate said collusion, why was he ONLY investigating Trump when even an average Joe could see direction from which true cooperation and collusion was coming from?

I still see the Herr Mueller investigation as a failed attempted coup against the sitting and duly elected President. It was one sided with the whole investigation with many heavy handed actions performed in an effort to get anything they could on Trump.

Seeing how so many montages show that each of these comrade MSM outlets even used the same language, the messages had to be coordinated. Putin had to have been ecstatic seeing the DNC falling into place to do his wishes.

This cartoon sums up how things really worked quite well. Thumbs up!

Exactly! I don’t recollect the minimal amount the S̶o̶v̶ Russians spent on their “interference” in the 2016 election. However much it was, rarely in the course of human history has there been a better ROI, all thanks to the Socialist-Democrats (which obviously includes virtually all those working in the MSM).

Did they spend anything? I figured that the MSM was doing it all without even being asked.

Yeah, I was thinking I recollected something in the $40k range for total spending, but it could just as easily have been $4k. I’ve reached that age where recollections of things which happened in HS while Eisenhower was President come easily to mind, yesterday is another issue.

Today I walked into a room and I knew exactly why I was there. It was the bathroom – but still…

Best of both worlds …. fellow travelers AND useful idiots.

The “Reset” button could have been on the card too!

Spot on Mr. Branco. Thanks for another gem.