Even Democrat voters in Florida approve of him by a wide margin. 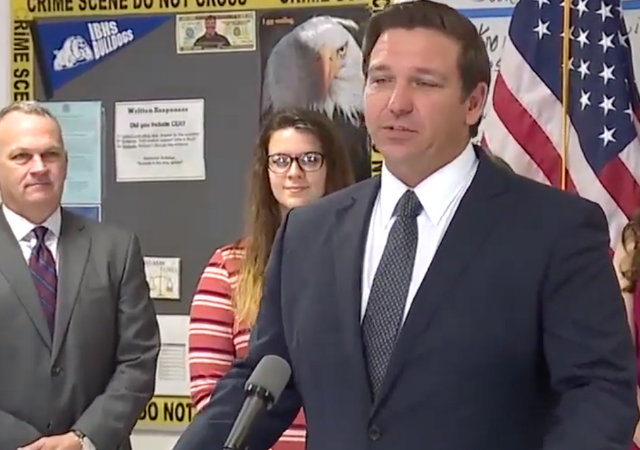 Republican Florida Gov. Ron DeSantis has only held the post for two months, but a Quinnipiac University poll shows that 59% of the citizens gave him their approval.

The Democrats? 42%! I know DeSantis has only served two months, but this could be trouble for the Democrats in 2020.

But remember, he’s only two months into his term. It’s still somewhat of a shock since he only defeated Democrat Andrew Gillum by 0.4% in November.

This score, though, is the “best score for a Florida governor in 10 years.”

From The South Florida Sun-Sentinel:

Democrats approved of DeSantis’ performance, 42 percent to 28 percent, for a net positive of 14 percentage points.

Among Republicans, 82 percent approve and 5 percent disapprove, which gives him a net positive of 77 percentage points.

Independent voters approve of the governor’s performance, 56 percent to 17 percent disapprove, a net plus of 39 points.

“Ron DeSantis won the governorship by the slimmest of margins, yet in his first two-plus months in office he has gotten off to a strong start. His 59 percent job approval today is better than most of his counterparts around the country,” Peter A. Brown, assistant director of the Quinnipiac University Poll said in a written analysis of the results.

He attributed part of DeSantis’ success to “his taking on issues such as the environment on which Republicans often don’t focus,” adding that the governor and other state politicians are “benefitting from an overall sunny mood among Floridians who are happy about the economy and life in general.”

The publication’s contact reporter Anthony Man pointed out something significant: 34% of those polled did not have an opinion on DeSantis.

Not only that, but the pollsters didn’t ask respondents a few important questions:

DeSantis has started his term with a flurry of actions: successfully pushing out the board of the South Florida Water Management District, suspending Broward Sheriff Scott Israel and Palm Beach County Elections Supervisor Susan Bucher, and remaking the Florida Supreme Court with a significantly more conservative bent.

Pollsters didn’t ask about any of those issues, but on two others found support for DeSantis’ approach.

The poll found that new Sen. Rick Scott (R), who served as governor before DeSantis, only had a 42% approval while 38% disapproved. Sen. Marco Rubio (R) sat at 50% with a 34% disapproval rating.

Isn’t it amazing what a sane experienced conservative thinking person can do? No BS and no pie-in-the-sky promises like we get from the left, CONSTANTLY! No absurd end of the world threats about global warming or the evils of capitalism. Just a good man who uses his head instead of a slogan.

And, beyond DeSantis’s stellar peformance, thus far, and, the obvious realization that the state dodged a bullet by rejecting the incompetent and corrupt demagogue, Andrew Gillum, the Dhimmi-crats will have to answer in Florida for their contemptible and feckless enabling, whitewashing and rationalizing of both brazen and unabashed Jew-hatred and Maduro-defending, by sundry prominent Dhimmi-crats in their ranks.

It’s obvious that the Dhimmi-crats have done themselves no favors, and, hopefully, will pay a steep electoral price for their cowardly and morally bankrupt antics, in 2020.

“…hopefully, will pay a steep electoral price for their cowardly and morally bankrupt antics, in 2020.”

From your keyboard to God’s eyes, and further hope for beyond 2020.

As a Florida resident who also had a Congressman DeSantis am surprised by these polls. No doubt Ron has done what is popular. But I think what has benefited him is that he took over with a booming economy and also not being stiff like Rick Scott. Ron has played the media like a fiddle and he so far has not been embroiled in any real controversy. Hurricane Season is coming and this will be a test to his management style. So far, so good, but I am not as fanatical about him as the polls show.

I love ya Ron but don’t “mokey this up!” I hope you can sustain the popularity!

Kudos to the Florida GOP! I have family there, living in the I-4 corridor and all of whom went for Obama in 2008 and 2012; but by 2014 my mom voted for “El Calvo” (Rick Scott) and my brother voted for Trump in 2016. I hope that the national GOP is paying attention.

The GOP is dead in Florida in 2020, and Florida will vote Democrat in the 2020 election, both state and Federal. Why? Because the fools in Florida’s electorate voted to allow felons to vote. Why does that matter? There are more than a million felons living in Florida. If only 10% legitimately vote that’s about 100,000 extra votes going to the Democrats, because felons overwhelmingly vote Democrat. Then there’s the additional opportunity for fraud. For example, adding 100,000 fraudulent votes to the state’s total wouldn’t raise any flags given the million new voters, but added to the legitimate felon vote turns a GOP victory into a permanent Democrat voting majority in Florida. Not only does that make a GOP win in the Presidential election almost impossible and hand the Democrats two more Senators, it makes the Florida legislature solidly Democrat.

You can kiss goodbye to shall-issue concealed carry permits and statewide preemption of gun laws. An income tax will probably implemented, the Democrats have been wanting that for decades. Think New Jersey or New York as the new normal, since far too many voters in Florida come from there.

FL is really two states and two time zones. They almost never vote the same way. The morons who fled the North to get away from excessive taxation and union payrolls vote for the same type of pol that drove them out in the first place! I am still amazed that almost half of the voters in FL voted for the shyster/crook Gillum! That tells a lot about tribalism. We are two tribes and only sane people will keep us the tribe in power.

It is my opinion that Desantis is already benefiting from his “Latino” last name, he will become even more popular over time. Identification politics, trump party affiliation.

But remember, he’s only two months into his term. It’s still somewhat of a shock since he only defeated Democrat Andrew Gillum by 0.4% in November.

Given the proximity in time, I suspect the difference is not one of changed opinions, but a measure of the margin of fraud in the last election.

Can you say “Broward County?”.