WWII Sailor in Iconic Times Square Photo Passes Away at 95

WWII Sailor in Iconic Times Square Photo Passes Away at 95

“The excitement of the war bein’ over, plus I had a few drinks. So when I saw the nurse I grabbed her, and I kissed her.” 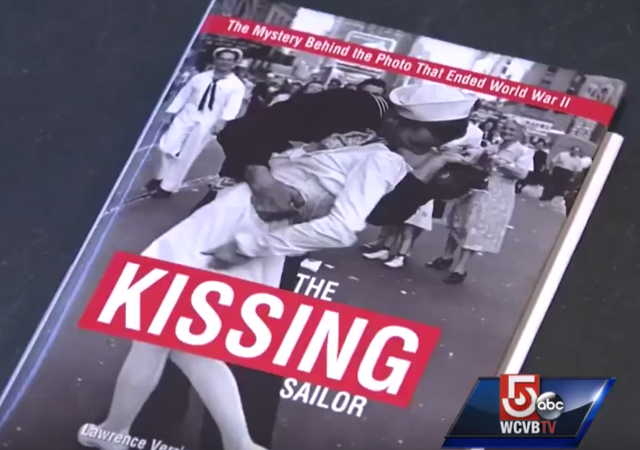 George Mendonsa, the sailor kissing a nurse in Times Square after WWII, has passed away at age 95.

Mendonsa claimed he was the sailor in the iconic photo, but could never convince Life magazine.

From The Providence Journal:

Mendonsa’s daughter, Sharon Molleur of Portsmouth, said he and her mother, who had been married more than 70 years, lived in an assisted living facility in Middletown. Molleur said she got a call at 1:30 a.m. Sunday saying that he had fallen and, moments later, had a seizure and died.

For 74 years, Mendonsa maintained that he was the sailor in the photo, but he was never able to convince Life magazine, which published the photo, one of four taken by Alfred Eisenstaedt, as “V-J Day in Times Square.”

Lawrence Verria, coauthor with George Galdorisi of “The Kissing Sailor,” published in 2012 by the Naval Institute Press, met Mendonsa “strictly as a topic of research.” His goal was to “find out who was in the pictures and let him tell the story.”

Results of facial recognition technology and the conclusions of experts in photography and forensic anthropology ruled out all the other sailors. “The evidence is so overwhelming.” Verria said Sunday night. “There really is no doubt…. This man deserves the credit during his lifetime.”

The nurse was Greta Zimmer Friedman and took place on August 14, 1945. CBS News reunited the two of them in 2012 and took them to Times Square:

“I did not see him approaching, and before I know it I was in this vice grip,” Friedman said.

But Mendonsa said he didn’t kiss her for long.

As the perfect strangers locked lips, world famous photographer Alfred Eisenstaedt snapped four pictures in just 10 seconds. CBS News reunited George and Greta in 2012 at the spot of their kiss for just the second time since that day in 1945.

“The excitement of the war bein’ over, plus I had a few drinks,” Mendonsa said. “So when I saw the nurse I grabbed her, and I kissed her.”

Good thing it wasn’t in 2019. The Me Too movement would have insisted he be charged with a sex crime.

Toxic masculinity, white privilege, sexual harassment,… All caught on film. And look at all the witnesses who could have testified! How on earth did we ever manage to win the war?

Posthumous conviction. I’m frankly embarrassed to be a woman.

heh. I went college with a guy who claimed to be his grandson. He had that picture framed in his dorm room and told that story. I took him at his word that it was legit.

Could be more than one guy was making this claim.

On average 6,600 Americans PER MONTH were killed in that war. And in Okinawa and the Kamikaze campaign, the Japanese seemed determined to fight to the death. So in the summer of ’45 the prospects were still pretty grim. Who can blame them for the exuberance and sense of relief they must have felt.

I imagine Mr. Mendonsa was not the only sailor to kiss the first pretty girl he noticed. It was an unusual moment, and one incident was captured on film.

God blessed us through these wonderful people. Not only did they save the world, afterward, they settled down to making our families and building our country.

thank you for your service

I would have grabbed her and kissed her. Think. It meant he didn’t have to die.

Are we really so PC we’re not supposed to care? Are men, men, who will chase ME-109s through the base of the Eifel tower are supposed to care what you’ll think a hundred years later? Grow up and get over yourselves.

As U.S. military planners contemplated a land invasion of Japan in 1943, military units were being held back from possible action in Berlin because it was understood that they would have to be sent to the Pacific.

‘There was a very, very tight timetable,’ Giangreco says. There were ‘clearly not enough forces in the Pacific.’

American war planners projected that a land invasion of Japan could cost the lives of up to a million U.S. soldiers and many more Japanese. These figures, Giangreco explains, were estimated based on terrain, the number of units fielded, and the number of enemy units they would have to fight.
“Around 1944,” Giangreco says, “they ultimately came to the conclusion that the casualties on the low end would be somewhere around the neighborhood of a quarter-million, and on the upper end, in through the million range.”
The Difference Between Defeat And Surrender
The invasions and battles at Okinawa and Iwo Jima were ruinous for the Japanese, but Giangreco describes how the Americans and the Japanese derived completely different conclusions from the same conflicts. The Americans extrapolated that the battles were bloody and costly — but in the end it was worth it because they thought the Japanese understood that the U.S. would prevail. The Japanese looked at those same casualties and felt the loss of life was worth it because it sent a message to the Americans that the Japanese were prepared to suffer casualties at a rate the Americans were not.
Some historians argue that Japan was already essentially defeated in 1945, even if it didn’t know that. Giangreco says there is a lot to that argument but that “defeat and surrender are two very different things.”
Giangreco suspects it would have been much harder to convince the Japanese to surrender than it was to convince the Germans.

‘The Germans at least surrendered in very large numbers when they saw a hopeless situation,’ he says. The only time large numbers of Japanese troops laid down their arms was in Manchuria, when Emperor Hirohito ordered them to surrender.

The appendix of Hell To Pay includes a 1995 letter written by Tales of the South Pacific author James Michener. He refused to allow the letter to be released until after his death. Originally from a Quaker background, Michener was a man of peace, but he stated that he could see no other alternative to the end of World War II.

“I know that if I went public with my views, I would be condemned and ridiculed,” Michener wrote. “But I stood there on the lip of the pulsating volcano, and I know that I was terrified at what might happen and damned relieved when the invasion became unnecessary. I accept the military estimates that at least 1 million lives were saved, and mine could have been one of them.””

Why I love the atom bomb. My dad was a seventeen y.o. Coastie in the Pacific in 1945. I realize others might take the opposite view, But had the US had to invade Japan my dad probably wouldn’t have lived through it, and I wouldn’t be here. I’m happy that I’m here. I’m also happy to see that the women who post and comment here can look at that picture and say, “What’s wrong with that? Why shouldn’t he kiss her?”

I remember VJ Day like it was yesterday. The first news I heard of the wars end was a neighbor lady running down our alley shouting “the war is over, The war is over!”. What a glorious day! All the long days of war were over, our family members would be coming home! Thanks be to God!