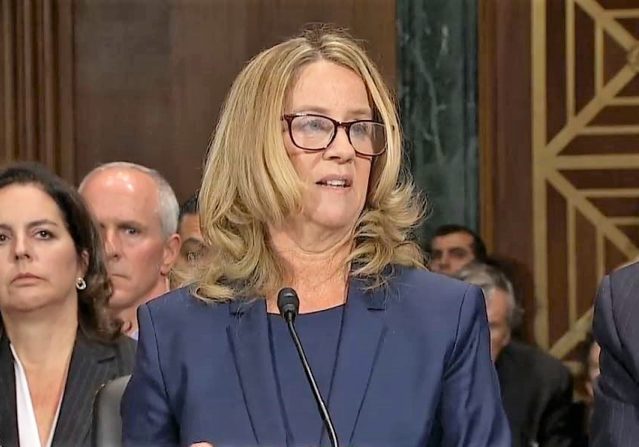 Virginia’s Governor Northam is not the only top-ranking state politician in the hot seat. Lt. Governor Justin Fairfax is facing a sexual assault allegation from 2004, one that’s been revisited publicly.

#BREAKING: Vanessa Tyson, who has accused VA Lt Gov Justin Fairfax of sexual assault, has retained Katz, Marshall, and Banks to represent her, the same firm that represented Christine Blasey Ford — via @Garrett_FoxNews

Mary covered the allegations and backstory in detail here.

Yes, the news about his sexual interlude with Ms. Tyson is beginning to leak out despite the media’s “black”out.

You mean they sought her out, right? What does she need a lawyer for? Is she going to file a suit? What is the gain for her? What does she do? I doubt she has the kind of money that affords this level of lawyer.

She needs the lawyer to extract the highest amount possible.

This is kind of funny, Number 2 guy thinks he has hit the jackpot and going to replace number one guy. Now he has a lawsuit which is going impoverish him regardless of the outcome.

Now Dems have both of these guys in the shithouse. What happens next, another election to replace both? Or do they have to stop the PC stuff cold and ride it out?

She can afford an attorney. Her bio:https://casbs.stanford.edu/people/vanessa-tyson

Ha. Looks like she is working at enhancing her resume. She is looking to move up in the Sexual Assault Survivors Industry. She can now claim cred as an actual survivor, and depending on how this plays out, she can add something about the ferocity of the push-back.

All I know is what’s on LI, but…
1) She fears her claim will be met by some manner of legal attack from the accused; or 2) She knows that her claim is bogus and she needs a legal adviser to tell her when to call it off and how to defend herself during the “retrograde maneuver”.

And, of course, she will want to hang a price tag on all the hurt she has suffered.

It is virtually always wise to lawyer up.

Tyson seems very credible to me.

This just keeps getting better and better.
Pass the Popcorn please!!!!!!!!!

thalesofmiletus in reply to notamemberofanyorganizedpolicital. | February 5, 2019 at 1:54 pm

“But…but…democracy dying in darkness! Won’t someone think of the poor news media!” #Learn2Code

thalesofmiletus in reply to notamemberofanyorganizedpolicital. | February 5, 2019 at 2:04 pm

I have difficulty associating anything “real” and that fruitcake Ford.

Nope, not getting on this train. You can *bet* that if the Gov resigns, the Dems will proudly crow about their morals for years and ignore this, regardless of any confirming facts that come out. God forbid they have *two* of their Govs resign.

I wonder if she’ll also hire Minnie Mouse as a voice coach.

Hmmmm. Somebody is attacking both these characters, using either unsubstantiated or outright silly bits of ancient history to hit them in two of the D’rats sore spots, racism (real or imaginary) or sexual abuse (again, real or imaginary). The idea is apparently to get the D’rats themselves to force them out of office. But we can be pretty sure that whoever is doing this is also a D’rat; of all the characters on the current political scene, only D’rats are both sufficiently vile and devious enough to work a plan like this. The antifa or anti-Globalist types are too thuggish and unimaginative to manipulate public (or D’rat) opinion so efficiently. So I suspect a D’rat, and a big one. But who?

However when they are done with their own, they will come back for us and try to finish the job

I really don’t like allegations from many years in the past, except for children…

I understand there are powerful, influencial people, and a victim can correctly feel frightened

There was a time women would not be believed, believe me I know

8 years latter women want to step up, I don’t know, lots of crazy people out there

How do you fight that?

Every bit of Fairfax’s reaction to this is classic behavior of a guilty person.

First attacks the people that broke the story. Then blame various parties for ‘leaking’ the story. All while saying as little as possible about the actual incident itself.

Contrast that to Kavanaugh. Immediate, unequivocal, repeated denials, followed by asking to be allowed to publicly tell his story. Never attacking either Democrats (though they richly deserved it), or Ford herself.

Everything about Fairfax’s behavior is telling me he’s guilty and that he KNOWS he’s guilty.

Perfect. The Blasey Ford law firm will subborn Fairfax’s accuser into changing her age at the time of the alleged assault by three years. (Ford’s claim shifted from “late teens” to when she was fifteen.) Then, like Northam, Fairfax won’t resign, and VA Democrats will saddled with these creeps until their terms run out.

The Ford legal team were ideologues and if this woman thinks they are going to work on her behalf, she is badly mistaken. They took on their previous role to get Trump and to stop a conservative court nominee. That’s the only reason they took the role because it was pro bono. I smell a “We did our best but it was not good enough” excuse coming from them eventually.

Another professor from California? I wonder what their workplaces are like?

Some of them have typhus and fleas. Maybe more than they’re admitting.

“Indelible in the hypocampus, was the sound of my gagging.”

This bimbo’s face makes my eyes hurt. They say that she gives good baby-voice. Gotta feel sorry for the husband. How could anyone know that the woman he is about to marry is a latent idiot with a valley girl tendencies?

Spandex be damned. There is some stuff in life that just should not be seen and Christine Blasio is of that domain.

Damn shame. I was prepared to believe her… 🙂

You don’t think this woman would want to find a legal team who could actually win.