The Washington Post dons a superhero cape in defense of a fellow Democrat. 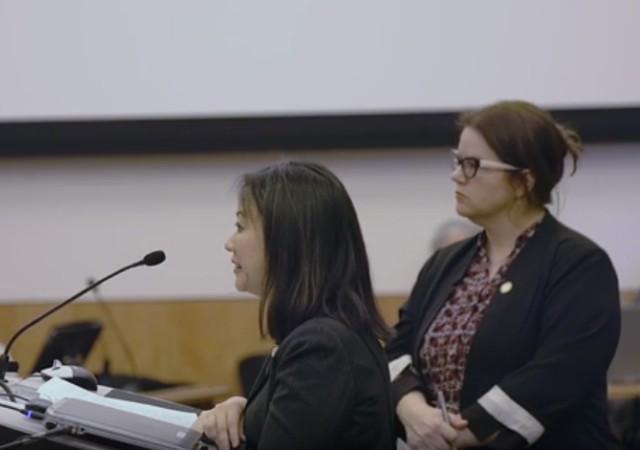 Kathy Tran desperately needed some good PR Thursday in the aftermath of the controversy surrounding her radical abortion law proposal, and when a Twitter post of hers failed to persuade people, a familiar Democrat-friendly source swooped in to try and save the day.

The Virginia Democratic Delegate reactivated her Twitter account Thursday morning to address the “misinformation” being spread about “The Repeal Act”, which would significantly loosen restrictions on third trimester abortions and make access to them much easier:

Over the last few days, you may have heard a lot of misinformation about my bill to help women make their own healthcare decisions in consultation with their doctors.

Her attempt at providing “the facts” didn’t go over so well.

Just a few hours after that tweet was posted, the Washington Post published their own spin on Tran’s week. It painted a glowing picture of a first-term legislator: a good person and hard-working mom who is just misunderstood. The first several paragraphs were on how she wished she had been better prepared and had not “misspoke” (note: she didn’t).

Antonio Olivo went on to write:

An edited video of Tran’s testimony was circulated and went viral on social media, leading some on Twitter to call Tran a “baby killer” or “a demonic creature.” Asked about the incident by the Daily Caller, Trump said he had seen the video and called Tran’s testimony “terrible.”

Stop, stop, stop. The “edited video” note the mainstream media slides into articles about videos released to the public by conservatives and Republicans make you think the video is deliberately deceptive (note that you didn’t see them play this trick in the initial coverage about the Covington Catholic controversy where the edited video was purposely deceptive, natch).

Besides, several videos were circulated of Tran from that day speaking about her legislation. Some were short clips under a minute, and some went over 6 minutes. Her comments were not taken out of context.

Olivo then reported, after numerous edits that substantially lengthened the piece, on how Tran and her family were receiving death threats in the aftermath of the backlash, which is not a good thing. Tran was quoted as talking about how difficult it was to have conversations with her elementary-school-aged children about why they needed extra security.

The article really veered off the rails after it explained a little bit about why Tran’s proposal was so controversial.

It read like it was lifted right off of a press release from Tran’s office, and it included three large photos of Tran holding her infant daughter while on the campaign trail and in her legislative office:

The first Asian American woman to win a seat in the Virginia House, Tran came to the United States as a Vietnam boat refu­gee in the 1970s, when she was an infant, according to her campaign website.

In 2017, she ran for the seat being vacated by retiring delegate Dave Albo (R-Fairfax). She says she decided to seek public office after realizing that her fourth baby was due on the day that Trump would be inaugurated as president of the United States.

Tran campaigned on a platform that includes creating more opportunities for immigrants, equal pay for women and expanding Medicaid in Virginia, beating Republican Lolita Mancheno-Smoak by 22 points. She often brought her infant, Elise, doorknocking with her, strapped in a carrier that she wore on her chest.

Once in Richmond, Tran drew attention for nursing Elise — by then a year old — on the House floor. She and Del. Jennifer Carroll Foy (D-Prince William) worked with first lady Pam Northam to establish lactation rooms inside the Capitol and started an informal “parents’ caucus” to help members — male or female — deal with the tricky issues of raising young children while serving in the legislature.

And let’s not forget about the (final) headline, which read:

Del. Kathy Tran was known for nursing her baby on the House floor. Now she’s getting death threats over abortion.

She’s “known for nursing her baby on the House floor.” She campaigned frequently while carrying her infant child. Her children’s safety is her top priority. She made the decision to run for office when she realized her was fourth baby was due on the day of Trump’s inauguration. She helped establish lactation rooms in the Capitol and started an informal “parents’ caucus.”

WaPo wants you to know that Tran is a caring, compassionate mother who likes to help fellow parents who are also serving in the state legislature. She has your best interests at heart. She couldn’t have meant anything bad by her pro- third trimester abortion “Repeal Act”, y’all. She’s just misunderstood, and we should believe her because she says so.

Lastly, not a single Republican opponent of the bill was featured in the piece to provide a counterpoint.

I almost wish the mainstream media would just stick to not covering these stories at all if all we’re going to get out of them are fluff-pieces that read more like “getting to know you” articles that completely gloss over the issue at hand.

Almost seems like something that was…RUSHED out to cover for Tran and had to be edited multiple times. Sort of like the average forum comments I make. Or my effort to start to write a paper with a clean slate.

notamemberofanyorganizedpolicital in reply to casualobserver. | February 1, 2019 at 2:42 pm

Tran was what before?

Still a Demon-crat obviously, but which of Obama’s 69 genders before……..

notamemberofanyorganizedpolicital in reply to katasuburi. | February 1, 2019 at 2:43 pm

Lots of Democrats where there I see.

The catch phrase for me is “mental health of the mother”. After nine months, this is suddenly an issue?

“Todd Akin was known for basically nothing. Now he’s getting death threats over a simple mistaken phrase.”

See how this would work if the press ran cover for Republicans?

“It painted a glowing picture of a first-term legislator: a good person and hard-working mom who is just misunderstood.”

And who just wants to help making murder easier and less burdensome to those who are willing, for a good price, to do the murdering. Is that too much to ask?

Not to mention less competition when Baby Tran is applying to an Ivy League school.

notamemberofanyorganizedpolicital in reply to Anti-Statist. | February 1, 2019 at 2:52 pm

Will she claim to be Osage or Cherokee?

“Misinformation” apparently involves presenting the facts, but not in a manner that makes Tran look good.

How dare we! Liberals are good and conservatives are bad! Nothing should be permitted to get in the way of that narrative.

Kathy Tran should “Learn to Code”

Is there a reason to think she has any aptitude for coding?

Bezos Pravda (aka WAPO) always runs cover for the Dems. They don’t care what Republicans think ever unless it is to cover Trump bashing. Anyone who lives in the Washington area has known how biased their news coverage was for years.

The fact the she and Gov Northam both claim that their comments were “taken out of context” is astonishing. There are video recordings of each that show they knew what they were saying and that they made their statements without ambiguity. The questioning of Tran could not have been more precise and her answers were concise and to the point. She even winced when asked if a woman who was dilated could request an abortion based on mental health reasons and she answered clearly and unequivocally that it would be allowed under her bill.

There is not doubt what is in her bill and what she meant when answering those questions.

She is a ghoul as is Northam… a pediatric neurologist no less.

One-child was more transparent and honest in motive and method than its Western-counterpart selective/recycled-child.

Kathy Tran was known for nursing her baby on the House floor.

I imagine the Times would have positively oozed if she’d had her baby aborted on the House floor. There’d be demand that she be made President by acclaim.

MIT says two thumbs up too!

You need to remove that NewsGuard logo, they’re anything but a guardian of the news. They say wapoop is a trusted news source among other bs they promote.
I linked this yesterday on the Networks, Liberal Cable News Ignore Virginia Governor’s Endorsement of Aborted Babies story you did.

“Ad tech companies have software to keep brands safe from hate speech and pornography. But artificial intelligence cannot root out false news because false news is designed to look like real news. NewsGuard adds an extra layer of protection as the only process that involves human beings—trained journalists—reviewing every website.”

It should be noted, the monkey-branching sleazeball he sent them to quickly shared them among her friends. Bezos then decided it would be a good idea to entangle his life with her.
https://www.thesun.co.uk/news/8174472/lauren-sanchez-jeff-bezos-sexts-national-enquirer/

Rumor has it you’ll need one of these – on Amazon.com – to see the penis in the photos:

Any woman who has already given birth and supports this is a heartless souless vile ghoul…..

Hmm. Sounds like murder and bigotry against future citizens who are immigrants via the vaginal canal.