Vans Employee Says “F*ck You” to MAGA Hat Wearing 14-Year-Old After Telling Him to Take Off His Hat, is Promptly Fired

Vans Employee Says “F*ck You” to MAGA Hat Wearing 14-Year-Old After Telling Him to Take Off His Hat, is Promptly Fired

“The actions and comments from this employee at the Oak Park location is in contrast with our values and beliefs,” said Vans in an official statement. 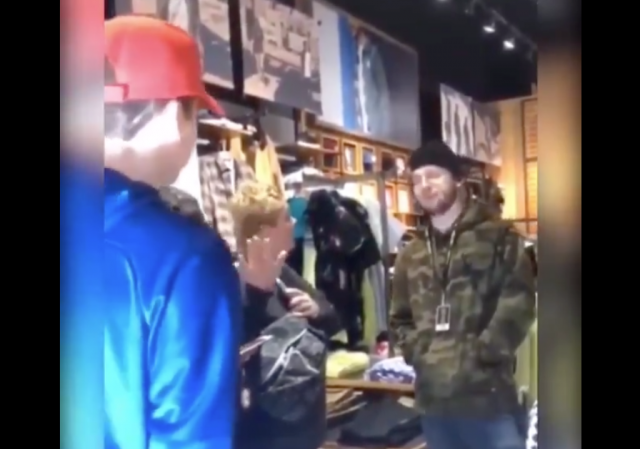 An employee at a Vans retail store in the Oak Park Mall in Overland Park, Kansas was fired after saying “f*ck you” to a 14-year-old customer wearing a red, “Make America Great Again” hat.

The employee asked the customer to remove his hat and then said, “f*ck you.”

The 14-year-old’s mother later confronted the employee, then spoke to the store’s manager. Someone with them recorded the latter encounter and shared it on social media.

Trump Derangement Syndrome is real. A Vans store employee at Oak Park Mall, Kansas told a 14-year-old “f*ck you” for wearing a MAGA hat. Let’s get him fired. pic.twitter.com/PNkPqAxBci

More from The Daily Caller who contacted the Vans Corporate office and was able to obtain a statement:

“I’m sure he’s heard it before,” the employee responded.

The mother then told the manager that the employee told her son to take off his hat. “Then he said F you to my son. My son said nothing to him, did nothing …” (RELATED: Random Stranger Takes Kid’s MAGA Hat, Then Tosses Drink On Him)

The Daily Caller reached out to Vans Corporate offices, who responded with a statement.

“Our focus is to provide the best customer service experience,” a Vans Corporate employee told The Daily Caller. “We did let this employee go. He is no longer with our company. The actions and comments from this employee at the Oak Park location is in contrast with our values and beliefs.”

“We have taken care of the situation,” she added, describing the employee’s actions as having “harassed a young male with a Trump hat.”

Oh, Kemberlee, you might want to fix that typo…last word of first sentence in the article. 😉

Freudian slip, or deliberate bug in the software?

For all the comments I see, “vide0” is pretty minor. Get a life.

Thumbs up for Vans!

Isn’t it odd how these Trump Deranged quislings are always threatening young kids wearing their MAGA hats? Why don’t they ever threaten someone their own size, I wonder?

“Why don’t they ever threaten someone their own size, I wonder?…”

Cowardly bullies like this moron are always afraid of getting bloodied.

They have, usually older folks.

It’s all about the fragility, man.

Why don’t they ever threaten someone their own size, I wonder?

They do. Didn’t you see the story today about the guy who went after a couple wearing MAGA hats, and it escalated until he allegedly pulled a gun on the husband?

Not surprising the TDS victim pulled a gun then. “I don’t like your hat so I’m gonna kill you.” How utterly pathetic.

Perhaps because they a chicken s?

Just another hypocritical leftist a-hole demonstrating his belief in “tolerance” and “inclusion.”

The stupid are always the loudest. This moron had to prove it.

(Good luck getting another job.)

“Good luck getting another job” How’s Adam Smith doing these days, anyway? You remember, that ass hat who lectured the Chick Fil-A girl about gay rights? His first protest ever cost him his career, reputation and sense of self So now poor Adam can’t find a job, is surviving on food stamps, has considered suicide, and is living in his in-law’s garage? How sad for him…

I just gotta ask – why is this downvoted? It is germane to the discussion. If you click on the link, you find a very reasonable story about how an otherwise successful exec let his politics get the best of him in public, and is life is in tatters. It is a good lesson for everyone, not just the left.

Mr/Ms Downvoter, can you explain?

Don’t worry. It’s just Rags. He down votes me just to prove what a “man” he is.

He kid of reminds me of Trayvon Martin, sneaking around and ambushing from his hiding spot 🙂 In the end, he is just as impotent.

He kid of reminds me of Trayvon Martin, sneaking around and ambushing from his hiding spot 🙂 In the end, he is just as impotent.

Hooray for the mommy!

Vans canvas shoes used to be limited to surf-skateboard shops and cost four times more than Converse which cost two times more than Skips. And now that once niche company have franchise stores full of .. surf swag..

I wore Keds, myself. LOL!

Mom heard the guy say that to her son, she went to the manager and pointed to the Tolerant Employee and said “that gentleman” when referring to him. She could have called him a scumbag, a dickweed, any number of raunchy things. But she didn’t because she has manners.

Yet again, look at the character of the MAGA side vs. the “gentleman.”

Shucks, you’d think snowflake knuckleheads would have learned not harass folks wearing MAGA hats after the first five or ten had been fired, but nahhhhh……

I live in Portland and, trust me, they’ll come after *anybody* wearing a MAGA hat.

One has to have a Google account to view that. Sorry…

So make a fake account that is only used to view Youtubie vids?

thanks, one of the most satisfying youtube videos ever.

We should buy a bunch of MAGA hats and hand them out to the homeless on Hawthorne. win win Gotta do something to get Wheeler of his ass.

FWIW, the street person didn’t even get to sit down before the owner of my local mochahut ushered him out the door. HE understands customer service, and WE support that, unlike the FourBux down the street.

This is the future generation that inherits this country? This may have been The FIRST time he found out he wasn’t “special”. Wonder what this former employee’s parents are like…. lawnmower or helicopter?

What’s dismaying is this happened in Kansas. KANSAS! I don’t want to needlessly depress anyone but Ted Cruz only beat beta male by a couple of percentage points. I certainly hope that a) these events aren’t related and b) they don’t portend anything for the future. But then hope isn’t a plan.

Look at the downvote pattern, it is probably Rags-Rump.

As my Employee, you shall report to work dressed Professionally.
You will always be courteous, and kind.
Your job is to serve my Customers, in every way you are able to.
If you have any reservations about this, you will no longer be my Employee.

Any evidence for this at all? (No, what somebody’s mom says about anything isn’t evidence—moms live in their own little universes, as anyone older than about five knows. I’m more than a bit skeptical about “My son said nothing to him.”)

Umm if you watch the video the employee flat out admits to what he said and then says I’m sure he heard it before.

The fact is each of these liberal nut cases expect to be celebrated in media and employment by their behavior.
That is what the MSM has done.
That is why Jussie Smollette and hundreds of other left wing hoaxers expect to be advanced in life.

It is increasingly clear that come 2020, we will see many young people wearing MAGA hats. It’s the rebel, iconoclastic thing to do. They love tweaking an adult population that the media portrays as against Trump. That said, it is disconcerting how clueless adult store employees can be. To give a customer a hard time in the store on political ideology is shameful.the only way they learn is by bad results for themselves. Perhaps the fellow who was fired will learn a lesson in civility.

The lesson he should learn is that when people go to a business to spend their money, staffs job is to give good service and take their money. Customers do not care rather or not staff like or dislikes anything.

Two cardinal rules of business are to be professional in ones dealing with customers to to never did your wick in any of the company’s vessels. Both tend to lead to very bad outcomes.