“This dangerous congressional proposal not only jeopardizes the risk of our national security, but hinders our law enforcement officers from effectively enforcing and upholding the law and protecting their communities.” 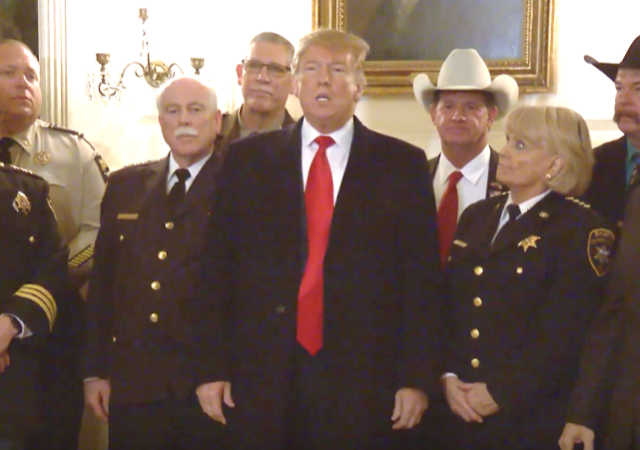 President Donald Trump, Vice President Mike Pence, and the House Freedom Caucus met with around 60 sheriffs from around the country as they demand a border wall and more ICE funding.

According to one sheriff, that would be a “catastrophe.”

Sheriffs took their demands for border security to lawmakers Monday morning, gathering at the Capitol to deliver a letter to Congress. pic.twitter.com/Se4oczHOIz

Sheriffs from coast to coast are waiting to get into US Capitol, will deliver strong message on border security funding to Congress as part of ⁦@NationalSheriff⁩ conference. pic.twitter.com/JoW680MFnG

Hodgson also said that if the policy passes Congress, the sheriffs will have to release people, which “could result in more crime.” He said this will put their “people at risk just to take care of their political agenda.”

Hodgson explained that Massachusetts is worried about border security due to “the state’s high opioid overdose rate and prevalence to fentanyl.” More from WGBH:

“One of the things I was able to point out at the press conference with the president was the fact that we cannot afford to have Congress dictating how many people we can arrest,” Hodgson told WGBH News. “That’s essentially what’s going on with this whole issue of Congress saying they’re going to limit the ICE beds. They’re going to try to restrict how many people ICE is going to be able to hold and then let the rest of them out into our communities to commit more crimes.”

“We as a state, we’re in as dangerous a situation in Massachusetts as anywhere else,” Hodgson said. He added, “We may not be immediately at the border, but we’re getting the immediate impacts of what’s coming across the drug traffickers, MS-13, the human traffickers. … Once you get through, you’re pushing this stuff [to] all of the United States.”

House and Senate immigration negotiators received letters from the National Sheriffs’ association and the Major County Sheriffs of America on Friday. From The Washington Examiner:

“This dangerous congressional proposal not only jeopardizes the risk of our national security, but hinders our law enforcement officers from effectively enforcing and upholding the law and protecting their communities.”

The letters were provided to Secrets.

Most of those arrested inside the U.S. have criminal records, convictions and have been deported before. The sheriffs suggested that those released often never return for court dates.

“Capping the number of detention beds utilized by ICE not only jeopardizes the integrity of the immigration system, but would cripple ICE’s ability to detain criminal aliens and other aliens who pose a risk to public safety or are a flight risk,” said the two letters signed by Sheriff John Layton, president of the National Sheriffs’ Association, Sheriff Grady Judd, president of the Major County Sheriffs of America, and Sheriff Mike Bouchard, vice president of governmental affairs for Major County Sheriffs of America.

Waiting for someone to say, “It’s obvious that to the democrats, the murder and rape of Americans is acceptable collateral damage for the ‘greater good’ [in their view] of permanent democrat majorities, i.e. the californiaization of the USA.”

Doubtful. Besides, here you are to put words in other folks mouths then castigate them for your manufactured, imaginary ‘offense’. Seems like you’ll be waiting for a while.

What really amazes me, is that it appears someone can actually type in crayon. Gratz!

got a better explanation for their behavior?

That said, the sustainable solution is emigration reform south of the border (e.g. El Chapo), a conservation of principles North, and unPlanned parenthood in America.

I understand Trump committed to reading the deal very soon. I can’t do his homework for him and neither can you, but if the stories we’ve heard are accurate, it’s going to look very pathetic if he signs that deal after last night’s rally, this meeting with sheriffs, and so on and so forth. He must also have some suspicion that the deal was rolled out at the precise time it would undermine his rally, but that’s how the game is played (against him by “his own side”) in Washington I guess.

We’ll see, but I hope he thinks we are owed honesty about the facts, whatever they are.

Our “lawmakers” don’t care. The democrats in NM are busy fast-tracking new restrictive firearms laws. 29 of our 33 Sheriffs have testified and gone on the record opposing them. The legislature’s response was to limit their ability to speak out in hearings. Our new Gov has pulled the National Guard from the border. She takes her dog and pony show to the Santa Teresa border crossing, stand in front of the wall and declares there’s no crisis. Meanwhile, hundreds of people at a time are stepping over the barbed wire fence in Hidalgo county and walking into the country. The Antelope Wells port of entry, which usually handled about 30 people a day is completely overwhelmed and our Governor’s response is to say we need more humanitarian workers to aid the illegal aliens. The democrats have made it crystal clear they believe they have a mandate to rule us, regardless of the constitution and our opposition.

The 3+ billion California plans on keeping after killing the train sure looks good right now….

Trump should build the wall and explain that it identifies as a “fence”.

Stepping up deportations would sure put pressure on the other side, and considering how many should be deported, it has merit.