On a fast track for April oral argument, and a decision by the end of June, on issue of whether Census can reinstate question as to citizenship. 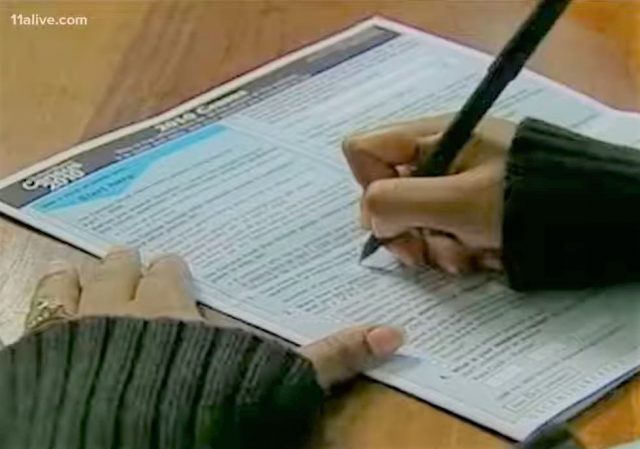 The Trump administration wants to reinstate a citizenship question on the 2020 Census. Opponents allege that the administration did not follow proper administrative procedures in coming to and announcing the change.

More substantively, opponents argue that the change somehow contradicts the constitutional mandate in Article 1, Section 2, to have an “actual Enumeration” of population. This latter argument, unlike the administrative argument, is particularly weak since having a citizenship question does not limit the census to only citizens; having the question on there suggests that non-citizens will be counted in the census, but with information provided as to citizenship.

We recently covered how a Federal judge orders citizenship question removed from 2020 Census.

In the normal course, the case would go to the Second Circuit Court of Appeals. But the Commerce Department has filed for a Petition for a Writ of Certiorari Before Judgment (pdf.)(full embed at bottom of post).

This direct review, though rarely granted in the past, is becoming an increasingly common strategy by the Trump administration where District Courts drive national policy through nationwide injunctions. The Supreme Court recently stayed a lower court injunction against the new military transgender policy without waiting for the appeals court to rule….

In the transgender military case, the government followed up the petition for a writ of certiorari before judgment with a request for a stay. I noted the significance of the stay in that case:

The Supreme Court’s orders seem to be a reflection that the conservative Justice recognize a dilemma unique to the Trump era — District Courts effectively running policy decisions reserved to the Executive Branch based on aggressive constitutional and statutory interpretations bathed in politics.

Given the time constraints and need for finality by June argued by the government, it’s hard to see how a stay of the lower court ruling would suffice. It would leave the ultimate merits uncertain.

So expect the Supreme Court to either take the case or reject it, but not to issue a stay.

The petition for writ of certiorari before judgment is granted. The case will be set for argument in the second week of the April argument session.

This means the case will be decided before the end of June, the deadline the government had indicated it needed to meet if any changes were going to be made to the Census questions.

I’m not familiar enough, right now, to pass judgment on the administrative law issues. But on the substantive issue of whether the Department of Commerce can ask a citizenship question, the answer clearly is Yes.

Ruth is back, she showed up today
Geez

RBG must look like death warmed over. I keep hearing about public sightings of her, yet there are no pics.

“The Trump administration wants to reinstate a citizenship question on the 2020 Census. Opponents allege that the administration did not follow proper administrative procedures in coming to and announcing the change.”

This is likely true, as the administration has been remarkably sloppy and stupid in following procedures.

It has cost the T-rump admin several times when it should not have.

The District Court ruling has less to do with level of care the Trump Administration is taking than politics. The left is using the APA as a cudgel – much the same way as the left uses Endangered Species Act to stop non-Left approved projects.

I truly doubt that every question on every government form or website went through the APA process.

It is a question on the Census. Policy is how that question is used in the future.

That’s just excuse-making apologia. You know as well as I that the administration has been remarkable for its left-footedness when all it had to do was take some time, pay attention, and do what they were doing competently.

Get out of here, Rags, you are really, really bad at Jedi mind tricks.

Yah, I am awful a “Jedi mind tricks”…because I never attempt them.

You are terrible are honest argument because you never attempt it…and surely not here.

You know damn good and well that SEVERAL of the T-rump admin roll-outs were terribly executed, and that left a gaping hole for the courts to push through.

Not really any more so than any other administration. You, as usual, are full of it.

The Constitution requires an enumeration of the People and our Posterity to promote the general Welfare, to assess the progress of Dodo Dynasties, and other purposes. Also, Under the Diversity Doctrine, it is imperative to know the number and distribution of colors.

“The People” as pointed out by SCOTUS are the citizens. Counting illegals puts us back to Southerners wanting slaves counted to boost their power…. Plantations changed but Dems still need more in bondage to the state.

The question has been there in the past and 20-30 million illegals make the question important at this time.

Furthermore, answering this question falsely should result in automatic immediate deportation, based on a simple hearing with no appeal.

Deportation would be appropriate, certainly, but if under penalty of perjury it should include jail time and a whopping fine first.

Also, maybe start taking fingerprints of all resident illegals and their offspring.

In the long run, I doubt it matters. The left will just encourage illegal aliens to lie.

Sir or Madam, that is racist, sexist, homophobic, trans-phobic, tripe that denies the true owners of this country their rightful Reconquista and Reparations rights without Due Process – how dare you?

I expected they would lie, that is why I was suggesting summary deportation for lying on the census.

There is a problem when getting rid of an illegal takes years.

Can someone please explain why this question is controversial, and then why non-citizens must also be counted?

They need to be counted sho that they can be queued for deportation.

Technically, there are non-citizens who are just fine here. They have green cards or tourist visas or any number of other legitimate reasons for being inside the country. I think it is a perfectly good idea to get their numbers also.

But they are transient and owe no allegiance to the country. Knowing there number is fine but not for representation.

Democrats claim that having the U.S. citizenship question on the census form will frighten illegal aliens, and even some legal resident aliens, into not participating in the census, for fear of being targeted for deportation. That could reduce Democratic representation when congressional districts are re-drawn, because states like California and NY and Florida have large numbers of illegal alien residents.

Non-citizens must also be counted in the census because the constitution requires an “actual enumeration” every 10 years, with the House of Representatives to be apportioned based on “the whole number of persons in each state.”

Representation without citizenship? Do you REALLY think the laws were set in place for non-citizens? They specifically determined “value” of slaves but I don’t see non-citizens mentioned.

Dude, I wasn’t advocating a position, I was answering this question above, from commenter “regulus arcturus”:

“Can someone please explain why this question is controversial, and then why non-citizens must also be counted?”

The constitution says what it says. How it is interpreted or applied is another matter. As for what the Founders intended, I doubt that they even foresaw a time when our government would allow tens of millions of foreign nationals to be living in our country illegally, and ripping off U.S. taxpayers for hundreds of billions of dollars a year.

SCOTUS could open a “can of worms” if they rule that asking if you’re a citizen in the census is unconstitutional, then why would it be constitutional to require an answer the exact same question why one exercises a constitutional right…buying a firearm?

I’m predicting a 5-4 split with the question being removed, with a tearful lament in a concurring opinion by Justice Roberts lamenting that if the administration did x y and z he’d rule differently.