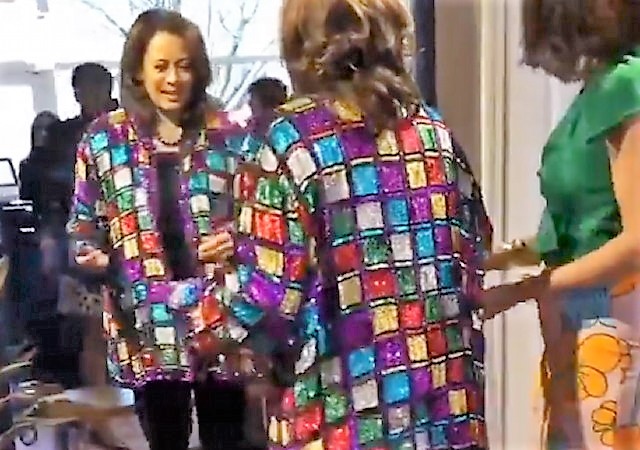 This weekend, reporters for CNN and CBS News who are supposedly covering Democrat primary candidate Kamala Harris enjoyed quite a friendly moment in a boutique as they helped the former prosecutor try on clothes.

Consider this a preview of the coverage we can expect for Democrats heading into 2020.

This was posted by CNN’s national political reporter Maeve Reston:

We kind of forced @kamalaharris to try on this awesome oversized rainbow sequin jacket … She snapped it up. @alivitali perfectly named it as “the Mardi Gras Jacket” #2020 #SouthCarolina #CampaignFashionReport pic.twitter.com/2G0NFRkKL6

When the campaign trail takes you to a boutique, and @MaeveReston spots a great sequined jacket for @KamalaHarris to try on. #campaignfashionreport pic.twitter.com/38bYJKqjRI

.@KamalaHarris loving that she can campaign for president *and* shop at this boutique in Columbia, SC. #scprimary pic.twitter.com/GXXUgG1n04

This is just embarrassing. So now journalists are going shopping with Harris, helping pick out clothes and then putting out glowing tweets about it. https://t.co/RX2IY0B8JL

That prompted this response from Kasie Hunt of NBC News:

Or skeet shooting with @LindseyGrahamSC

I’m all for female candidates expanding the list of campaign activities https://t.co/KgIgxnNW5x

To which Hume replied:

Talk about missing the point. Did journalists help Walker pick out his motorcycle, then gush about it on Twitter? Did they they help Romney on with his life jacket? That Kamala Harris shopping incident wasn’t coverage, it was participation. https://t.co/tjg7OqJ7uu

This is a CBS reporter noting, without evident disapproval, that a CNN colleague is helping dress a Democratic candidate she’s supposed to be covering. https://t.co/qa7GgZbs1P

As did David Martosko of the Daily Mail:

If this is what the 2020 campaign is going to be like, President Trump’s complaints about the media could have even more staying power with his base than the last time around. https://t.co/3uHwlbdc1b

Media yesterday: No, Mr. President, we are not fake news.

Media today: Here, Kamala. Try this one on.

CNN and CBS “News” are not news media they are agenda driven propaganda “News” media shilling and working for the democrats and liberals.

notamemberofanyorganizedpolicital in reply to Kevin Smith. | February 18, 2019 at 1:02 pm

CBS and CNN acting the “Johns” like “buying dresses” for the Hooker in Pretty Lady.

“Pretty Woman” that is for the movie title.

It is hard to miss that the MSM is now tweeting about “Harris and her technicolor dream candidacy coat.” Soon, it will be glowing reports about her marvelous performance at her rallies thus giving them their new name in covering her, the Multicolored Sycophant Media.

Dream coat? Really? Tacky and totally lacking in class. Just like Hooker Harris. In fact that makes it a perfect coat for her. A hooker coat for a hooker.

So much for the myth of the adversarial press.

This kind of slobbering adoration will continue until election night. If she does not get the nomination, their ejaculations of unrequited love will be redirected to whomever is the nominee.
Correspondingly, there will be a tsunami of negative coverage directed toward Trump and anyone associated with him.
At the same time, they will be sanctimoniously declaiming on the topic of their supposed objectivity.

1. Seems they’re copying Melania Trump’s fashion sense, albeit at the bargain level; remember her multicolored Jacket she wore a couple of years ago, quite pretty. But it FIT.

2. I’m sure it’s no surprise that they really don’t care about the candidate spending money on clothes, as long as it’s a candidate they agree with…. They harangued Sarah Palin only because she was beautiful and they disagreed with her. They didn’t want her able to look appropriate on national television and having her beautiful looks enhanced by beautiful expensive clothing….

I can’t imagine Melania wearing anything that hideous.

I don’t know whose fashion sense they’re copying but it’s not hers.

Aside from the fact of professional fashion model Melania Trump able to pull off what unlikeble shlumps like moooochelle or Kamel never could, remember Mathew 7:6:

“Do not give what is holy to the dogs; nor cast your pearls before swine, lest they trample them under their feet, and turn and tear you in pieces.”

Remember folks, journalists don’t root for a particular side.
They keep telling us that.

Well, that’s true. Journalists don’t root for a particular side, but we’re talking about CNN and CBS News here. Not journalists.

Telling her that jacket becomes her? Maybe they’re on Fauxcahontas’ side.

America—where you can be a socialist race-baiting control freak and look fantabulous while doing it. What a country!

Seriously, that thing is hideous. It looks like something she’d put on after a shipwreck so rescue helicopters can see her. But better than appearing in a blackface costume, maybe. Maybe.

Is it possible for the msm to beclown themselves even more? I didn’t think so until this appeared. They have given new meaning to the word “Fake” as in news. It now also means to have no objectivity what so ever!

Better for the world if one time reporters sell clothes than write vaporware and otherwise faulty code.

“This is good, but I think I need a few more outfits. Lets go down to Tents-R-Us and look through the Hillary Collection. Maybe they’re on sale.”

What’s interesting is their insistence that they didn’t do anything wrong; they’re not sorry they recommended that godawful coat; and how dare we call them on their lack of journalistic ethics. Oh, and we’re sexists for pointing out any of this.

Evidently the blind leading the blind.

First of all…color me unimpressed.

Secondly, I am waiting for the linkage to another “coat of many colors”. Sort of like..from humble beginnings to chief executor of a great country.

Not asking much, but can we have a follow up with Hillary trying out the latest orange jumpsuit fashions?

The Moist Panty school of journalism.

Shhhhhhhhhhh everyone! With fashion choices like that, we should be applauding the media, not criticizing!!!!!!!!

Nice to know the fashion sense of journalists is only exceeded by their determination to get to the truth and their non-partisan nature.

(True, if all of the above are ranked in negative numbers)

This reminds me of the coverage Sarah Palin got for shopping for campaign clothing, except that the coverage for her was scathing.

So, where are the questions, and the snotty speculation, about who is paying for this?

Also, why are the reporters making themselves part of the story? I thought that kind of behavior was considered unprofessional.

Is their real point that women are intellectual lightweights that don’t understand how to behave in the workplace?

Hope she wears that sequin jacket on election night when she concedes the 2020 election and delivers her concession speech.

This is just embarrassing. So now journalists are going shopping with Harris, helping pick out clothes and then putting out glowing tweets about it. https://t.co/RX2IY0B8JL

No Brit, “journalists” are not going out shopping with her. Admiring sycophants are.

Running for President and shopping….multitasking at it’s finest.