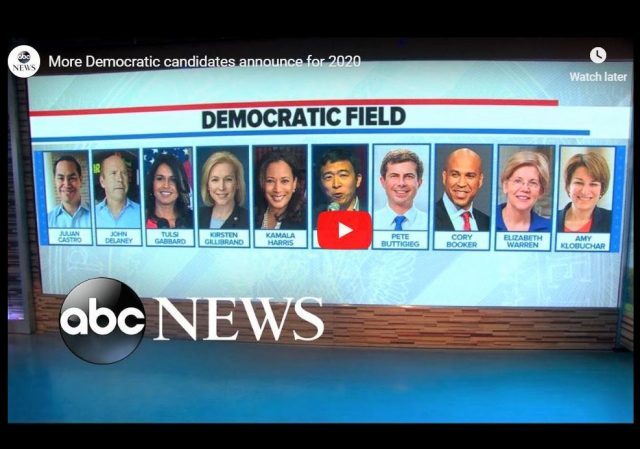 Politico obtained a letter that says several early primary state Democratic Party chairs want the 2020 candidates to sign a non-aggression pact, which means they cannot wage war against each other on social media.

“The Association of State Democratic Committees, the Democratic National Committee and the Presidential campaigns can and must work together in preventing the pollution of our discourse.”

The letter continues: “Further, we want the campaigns to commit to report illicit activity they uncover to social media platforms, and when necessary, to law enforcement and the Department of Homeland Security.”

The letter marks a significant attempt to shape the tactics and tenor of political discourse as the Democratic primary plays out on digital platforms. The intent is to forge an agreement laying out norms and rules the campaigns should follow with regard to disinformation tactics and cybersecurity.

Those four states have a major role in the primaries, especially Iowa and New Hampshire as the first two states to hold primaries.

This will not stop others from engaging in smearing tactics. The letter comes on the heels of another report from Politico that showed “a widespread disinformation campaign targeting 2020 candidates is already underway on social media.” The report claimed that this “campaign included fake, racist and sexist memes targeting the candidates over various social media platforms, some of it designed to divide and sow chaos within the party.”

Party chairs and others have welcomed this initiative:

Iowa Democratic Party Chairman Troy Price said he and other party chairs have discussed a variety of ways to avoid the use of illicit tactics by the 2020 campaigns.

Simon Rosenberg, who ran the campaign to counter disinformation for the Democratic Congressional Campaign Committee during the 2018 midterms, has led the call for the pact among the 2020 campaigns and the Democratic National Committee. Rosenberg noted that political parties in Europe recently agreed to such a non-aggression pact with regard to disinformation warfare.

“If we know the campaigns aren’t doing it, it’s going to be much easier to find it and make it go away. If this becomes widespread, it will become truly impossible to root out what’s coming from foreign powers,” Rosenberg said in an interview.

“There’s something bigger than all of us here, and that’s our democracy. Democrats should make a clear stand, understanding that if we don’t set clear norms and rules soon, we could see a proliferation of this illicit tactics that could do permanent and lasting harm to our democracy and other democracies throughout the world.”

notamemberofanyorganizedpolicital in reply to Firewatch. | February 28, 2019 at 5:24 pm

It would be a shame to miss the free for all.

Both Facebook and Twitter are acting like part of the Democrat political party in their suppression of GOP and conservative voices. This is only going to get worse. PayPal and YouTube have jumped into the same adolescent attempt to construct a utopia that is void of individual thinking.

The same is true of Chase Bank and Paypal.

notamemberofanyorganizedpolicital in reply to Valerie. | February 28, 2019 at 5:24 pm

Fine, don’t any of you guys or the DNC or any of your fellow travelers hire David Brock’s flock of nerd virgins.

This is just the Democratic Party’s version of the Republican Eleventh Commandment, paraphrased as “Thou shalt not speak ill of other Republicans.” Maybe it’s smart politics. Trump certainly didn’t observe it, but, then again, he wasn’t a real Republican. And some of his nastiness rubbed off on several of the other candidates.

Oh please stop the farce. He broke nothing that wasn’t already broken good and hard before he got there and you know it

Those who have bothered to review Trump’s actual quotes will readily recognize that he is more gently spoken than a large number of prominent Democrats, including Nancy Pelosi, Chuck Schumer, Elizabeth Warren, Loretta Lynch, Maxine Walters, and Adam Schiff.

I am not done with the offensive speakers, I just got tired of writing examples.

DJT is not the problem. He is the outcome of a voter response to a problem voters have with both parties. Given his successes, the country is fortunate to have selected him.

The Democrat Party needs to clean house, and one aspect of that cleaning is to bounce out the people calling for violence against American voters and candidates.

Wouldn’t eliminating disinformation, illicit campaign tactics, bots, trollfarms, fake accounts, altered text, audio, and video, any and all inauthentic speech pretty much eliminate everything the MSM does every day?

Oh, wait. They just mean when all that kind of stuff is aimed at Dimocrat candidates, not Republicans.

If Hillary agrees to it, wake me up.

What is “inauthentic speech”?

Up voted you both..very funny tag team!
Gracie Allen always got the big laugh only as a result of George giving her the opening of the “straight line”.

That’s what I was going to ask. Is it any speech that departs the Socialist Democratic Party Plantation party line?

You simply cannot be a member of the Democrat party and be this dumb.

They don’t care about your or the party. They care about THEMSELVES and their own power. ESPECIALLY low-intelligence types like Kamala Harris and Cory Booker.

ANYBODY in their way is an obstacle to be destroyed.

Great plan. dems treat each other with kid gloves through the primaries,everyone gets a participation trophy, they send their least bad candidate into debates with President Donald J. Trump… what could go wrong?

Just another form of campaign finance limits. Whomever agrees to it will lose.

Which is a completely cray cray take because all the Democrat 2020 candidate are #Socialist to Commie, extreme left to terrorist left. and they just can’t help themselves trying to out do each other going to the left.

You know that every single Democrat candidate who signs onto this will be working hand in glove with a whole series of mudslinging groups to slime their opponents while claiming to be ‘above the fray.’

They don’t even hide it anymore.

“What? No ‘inauthentic speech’? What am I supposed to do, just stand here with my trap clamped shut, looking stupid?”

Don’t the Russian bots have to be part of the agreement?

Are you saying the real collusion was between the Hillary campaign and the Russians? 😉