First time any cardinal has been defrocked for alleged sexual abuse 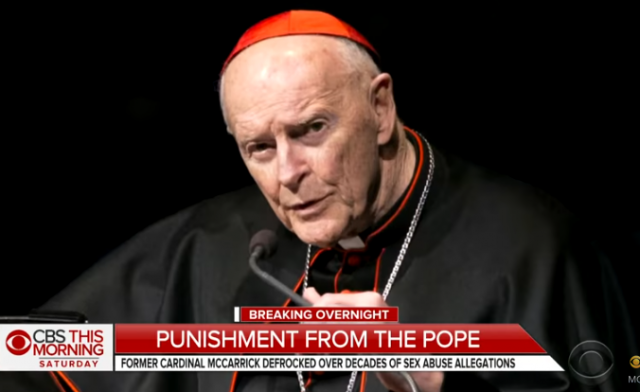 Last fall, I reported that Pope Francis held an emergency summit with U.S. bishops over the growing sex abuse crisis and cover-up scandal that has impacted the Roman Catholic Church after revelations by a Pennsylvania grand jury and the details offered in a letter published by Archbishop Carlo Maria Viganò, who served a a Vatican diplomat in Washington DC from 2011 to 2016.

In the wake of that meeting, Cardinal Daniel DiNardo of Galveston-Houston requested a full Vatican investigation into the charges against former U.S. Cardinal Theodore McCarrick, stating he wanted answers to allegations church officials ignored accusations of McCarrick’s sexual abuse and harassment of seminarians and teens while continually promoting and supporting him.

As a result of that investigation, Pope Francis has expelled McCarrick, also the former archbishop of Washington, from the priesthood.

In a statement on Saturday, the Vatican said Mr. McCarrick had been dismissed after he was tried and found guilty of several crimes, including soliciting sex during confession and “sins” with minors and with adults, “with the aggravating factor of the abuse of power.”

While the Vatican has defrocked hundreds of priests for sexual abuse of minors, few of the church’s leaders have faced severe discipline. The decision to laicize, or defrock, Mr. McCarrick is “almost revolutionary,” said Kurt Martens, a professor of canon law at the Catholic University of America.

Defrocking is the harshest penalty that can be enacted on a Catholic priesto by the church. The church-related punishments include McCarrick being barred from celebrating Mass or other sacraments including confession, wearing clerical garb, and using honorific titles reserved for the Catholic clergy.

McCarrick’s defrocking comes just five days before the Pope leads a landmark summit of bishops from around the globe. The summit is aimed at addressing the sexual abuse crisis.

Victims rights advocates intend to converge on Rome to follow-up on the McCarrick case.

“The pope has known from the earliest days of his papacy, or he should have known, that ex-cardinal McCarrick was a sexual predator,” said Anne Barrett Doyle, an advocate at BishopAccountability.org.

“He has a resistance to removing bishops and he also has a tolerance for bishops who are sexual wrongdoers,” Doyle told The Associated Press on Saturday near St. Peter’s Square.

Of the defrocking, Doyle said: “Let McCarrick be the first of many. I can think of 10 other bishops who are substantively, credibly accused of sexual abuse with minor and sexual misconduct with adults, who should be laicized.”

What’s angered people from the beginning about the McCarrick scandal isn’t simply the pattern of behavior that’s been exposed, which may be especially galling because it involves an ex-cardinal but which, in itself, is sadly familiar. What’s created the deep sense of frustration one senses at the Catholic grassroots is the perception that senior authority figures in the Church were aware of concerns about McCarrick but continued to move him up the ladder, often for reasons of politics and self-interest….

…If Francis and his advisers want the McCarrick case to be wrapped up before the summit later this month, therefore, just laicizing him won’t do the trick. They’ll also need to explain how we got to a point where such a move is necessary – and, of course, offer some reason to believe we won’t be here again.

Archbishop Carlo Maria Viganò, whose letter helped trigger the outcry from the laity, is not optimistic about the likely results from the summit.

Looking ahead to next week’s sex abuse summit in Rome, Viganò expressed little hope the bishops’ gathering will solve the ongoing predator priest scandal, noting conference organizers are ignoring the roots of the crisis.

“I am praying intensely for the success of the February summit,” said the archbishop, adding he “would rejoice greatly if the summit were successful.”

But, he noted, “there is no sign of a genuine willingness to attend to the real causes” of the crisis.

One down out of how many more who ought to go. We’ll see what the February summit brings. I’m sceptical.

Clean the system through a conservation of principles and personal, individual responsibility.

The Purple Mafia protects their own

It’s “almost revolutionary,” to defrock a priest for soliciting sex during confession.

I would have characterized it as more like “absolutely necessary.”

In Catholicism, the sin of scandal is among the worst. It is different from the way we use the word, now.

According to St. Thomas (II-II:43:1) scandal is a word or action evil in itself, which occasions another’s spiritual ruin. To misuse the confessional as a means of seducing someone into a ruinous relationship is is bad as it gets.

ALL bureaucracies come to serve their personal interests over all else, this situation is one of the most damning I have ever seen. If it was one of my children, the pedophile would have suffered immediate terminal accountability. Church hierarchy who covered for this should all get the same treatment.

There is nothing worse than those who prey on innocent children.

Too little too late

I wonder how it would be received if the Pope were to answer that question honestly:

“We allowed sexual perverts and politicians who deny Catholic and Christian teaching to remain in the Church so that we would not be accused of discrimination.”

The titanic crime of the Church has been the way that it not only protected these criminals by hushing everything up, but the systematic way the perverts were moved so that they could continue to prey on new unsuspecting populations. Criminal, disgusting, and thoroughly un-Christian. And they’ve been at it for decades . . . that we know about. Probably far longer.

This is just a diversion to deflect from the bishops synod on molestation. With Cardinal Cupich – one of McCarrick’s proteges – running the synod, you can be assured nothing will happen.

You are correct, bw222. The gravity of the crimes and McCarrick’s unrepentant recidivism makes his defrocking a large enough bone to throw at the true reformers to stop them from forcing a conversation about the elephant in the room: a gay subculture that covers for each other in crimes against both children and adult males under the church’s control.

An independent analysis found that close to 80% of the church abuse victims were young males. And what you may not know about McCarrick is that his predation on young adult seminarians (in their late teens and early 20s) was well known. He had a beach house at the Jersey Shore where he routinely took young seminarians and sexually assaulted them there. The power differential and the complete lack of support for these victimized young men led many young men to either submit or leave the seminary. (And some did.)

There is a huge amount below the surface. The sexual assaults of young adult males at seminaries is almost never dealt with because it doesn’t fall under the label of pedophilia.

With this defrocking move, Cupich et al can point to McCarrick and claim to have addressed the sexual abuse monster and they can talk for days about “clericalism.” What a waste.

I understand a soon-to-be-released book by a close associate of Francis admits that Vigano’s original testimony, that he told Francis about the problems with McCarrick in Washington, is true.

And I fear that Tel is correct: The synod will talk only about the abuse of children, and will try to skate over the routine acts of many in power with young men.