A Democrat judge manages to unite North Carolina conservatives and liberals, who are otherwise bitterly divided over everything. 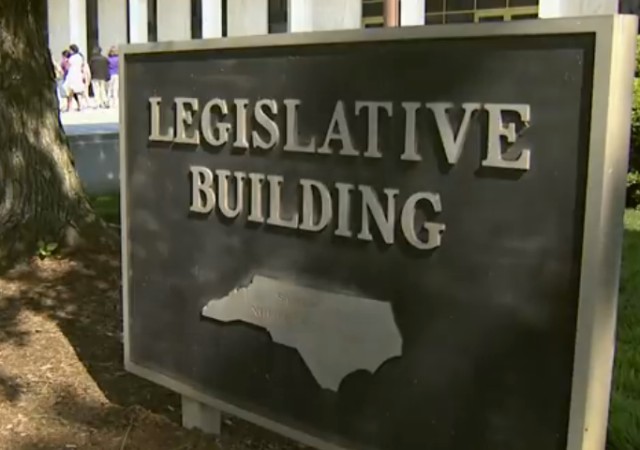 A Wake County Superior Court judge in North Carolina has written a ruling so outlandish that state Democrats and Republicans, who are normally at each other’s throats, have found themselves in rare agreement.

The Raleigh News and Observer reports:

A judge has just thrown out two amendments to the North Carolina Constitution that voters approved in November.

One of the amendments was to implement a voter ID requirement, and the other was a cap on the state income tax rate.

The North Carolina General Assembly is so gerrymandered that its members don’t truly represent the people of the state and thus should never have proposed constitutional amendments in the first place, Wake County Superior Court Judge G. Bryan Collins wrote in his ruling that was issued late Friday afternoon.

“An illegally constituted General Assembly does not represent the people of North Carolina and is therefore not empowered to pass legislation that would amend the state’s constitution,” he wrote.

The North Carolina NAACP, which filed the lawsuit, praised the Democrat judge’s ruling:

“We are delighted that the acts of the previous majority, which came to power through the use of racially discriminatory maps, have been checked,” N.C. NAACP president Rev. Dr. T. Anthony Spearman said in a press release after the ruling was issued. “The prior General Assembly’s attempt to use its ill-gotten power to enshrine a racist photo voter ID requirement in the state constitution was particularly egregious, and we applaud the court for invalidating these attempts at unconstitutional overreach.”

This is just bizarre, especially when you consider the fact that these were statewide referendums that a comfortable majority of voters across North Carolina approved in November 2018. It’s not like the amendments only applied to so-called “gerrymandered” districts.

There were two other statewide amendments that passed: One to protect hunting and fishing rights and one that strengthened victims rights. Oddly enough, they weren’t impacted by the ruling.

Barbara Jackson, a Republican and former NC Supreme Court justice, had this to say about the news:

Normally, anytime a judge rules against Republicans in the state legislature, Democrats and their affiliated special interest groups waste no time high-fiving each other and taking to social media to boast about their judicial “victories.” And they’ve had a number of wins in liberal-friendly courtrooms, considering they’ve gone to court over virtually every major piece of legislation passed since Republicans came into the majority for the first time in over 100 years back in 2010.

But in this case, their reactions are different, divided. State Senator Jeff Jackson (no relation), a Democrat whose profile was elevated nationally during the HB2 “bathroom bill” drama, posted a thread on Twitter denouncing the ruling.

2. The ruling itself is unworkable. I don’t think there’s a legal principle that would validate statutes but invalidate constitutional amendments on the grounds of gerrymandering. The rationale would be identical for both. 4/

What he doesn’t mention is the fact that the ruling, if it stands, would invalidate seats some of his Democrat colleagues won in 2018 because of the alleged “gerrymandered” nature of several districts. So he also has political reasons for opposing it.

Perhaps most the most interesting reaction to Judge Collins’s overreach was from the Charlotte Observer‘s left wing editorial board, who have never come across a liberal judicial activist they didn’t like. In an editorial with the headline “A liberal NC ruling that does liberals no favors”, they wrote:

It’s a reach of legal logic, a ruling that appears more like progressive fist-pounding than something that should come from the bench. It also prompts a follow-up question: If, as Collins contends, gerrymandering strips the General Assembly of the authority to amend the N.C. constitution, wouldn’t it also render invalid any laws these same legislators pass?

Those same Republicans have now been handed a gift from Collins — a real-life example that overreaching judges want to bend the constitution for progressive purposes. It’s the go-to gripe whenever a ruling doesn’t go Republicans way, something that’s happened often since the GOP took power in North Carolina and passed a series of constitutionally iffy laws. Those include previous attempts at voter suppression that courts have vigorously slapped down.

But on Friday, Collins tainted legitimate court decisions by allowing Republicans to point to one fantastical ruling. He did North Carolinians, liberal or conservative, no favors.

Translation: Because Collins has proven a point Republicans in North Carolina have long made about activism from the bench, we are therefore against the ruling because it invalidates our other editorials declaring liberal judicial activism doesn’t exist.

On the conservative side, John Locke Foundation chairman John Hood dissected the ruling and believes it will ultimately hurt Democrats more than Republicans:

North Carolinians support voter ID and the tax cap. They just added them to the state constitution. If this decision survives appeal, voters will view the state’s judiciary as the usurpers — and they’ll be right.

Politically, the plaintiffs and the progressive interest groups who have financed and cheered them on have put Democrats in a perilous situation and handed Republicans a potent election issue. If a Democratic judiciary strikes down popular policies just approved by the voters themselves, most will see the Democrats as the party hostile to popular sovereignty here, not the Republicans.

In any event, as North Carolina conservative activist A.P. Dillon noted, when you as a progressive lose the Charlotte Observer on a ruling that – on paper – benefits liberals, you’ve really done something wrong.

Republican leaders in the state house and senate have vowed to appeal.

He also declared the votes of the people of North Carolina as Unconstitutional.

Judges want to be the ones to rule, that much is now obvious.

Can someone explain to me how you Gerrymander a State Wide Vote?

You don’t; you gerrymander the legislature, where the proposal requires a 3/5 majority.

Well, for a good visual example, look at Hawaii. It’s clear that the statewide votes, up to and including elections for Governor, Senators, and President, are the result of gerrymandering. Borders like that just don’t appear in nature.

If that’s the actual ruling, then the judge has essentially forbidden the General Assembly, in its current makeup and any future makeup with the same districts, from passing laws, I take it? He may not have issued a permanent injunction dissolving the General Assembly, but he has provided a legal precedent for challenging each and every individual bill passed by the Assembly.

So… okay, what next?

Perhaps the good judge obtained his law degree in Hawaii…

I could be mistaken here, but when the Republicans took over the legislature a while back, they “gerrymandered” several predominantly black districts into existance so as to give people of color representation in the Assembly. No good deed goes unpunished, so the NAACP filed suit and won in the 4th Circuit. So the legislature went back to the drawing board and tried again, and the NAACP doesn’t like the new districts either. There’s just no pleasing some people.

So when do the Impeachment proceedings against Judge Collins begin?

So when do the Impeachment proceedings against Judge Collins begin?
Precisely so.

You have it right. The legislature went back and drew districts which didn’t use race at all. Leftists are now suing against those districts.

The absurd thing here is that “gerrymandered districts” have nothing to do with voting on a constitutional amendment. It was one man – one vote, regardless of district.

Thanks for posting this article, Stacey.

Not so. Before the proposals could go to a referendum they had to pass the legislature with a 3/5 majority — and that’s where the gerrymandered districts come in.

This is what the NAACP, et al., claimed, and the basis on which this rogue judge ruled.

It’s not just a claim, it’s the irrefutable truth. Whether gerrymandered districts invalidate legislative decisions is a matter of opinion, and the judge’s opinion is at the very least startling and unprecedented. But that the amendments depended on a legislative decision is a fact which nobody can dispute.

Yeah OK, but his nullification of a coequal branch of government (and coequal with the top of the state judiciary, not with his lower level court) is a hell of a reach, and the matter in question was confirmed by a non-gerrymanderable statewide popular vote.

But he could say the gerrymandering caused turnout effects that call that popular vote into question too, right?

At some point district courts have to be pounded back into their places and sanctioned when they do nutty and partisan stuff like this.

Why are they appealing?

And the he’ll declare the impeachment to be similarly invalid.

He can do that from the street corner with the other crazies instead of behind the bench.

Yes by his own logic, he could. It’s the legislature that impeaches, and they’re too gerrymandered to do anything binding, because he says so.

Thread title is not an exaggeration. He has decided that the legislature isn’t good enough for him so he’s nullifying it in general.

Tar and feather was once a societally approved act. Could there be a resurgence of the deed?

NC local judges have been out of control for quite a while. We’ve had a Wake County judge running the entire state’s school funding system for years.

They need a constitutional amendment that provides a much simpler and more practical way of removing judges, and for the legislature to reverse their decisions. There are too many of these politically-driven hack judges who believe that they can rewrite law to suit themselves, and no one can touch them.

This isn’t just a NC problem, but nationwide and worldwide — there are political judges making lunatic decisions everywhere, and something needs to be done to control them. The idea of an independent judiciary only works when courts are staffed with honorable, competent people who will follow the law, rather than their personal preferences, and in far too many instances this is not the case.

You raise a very good issue. How can errant judges be removed from the bench, even if it’s not for crimes or corruption?

Here in NE not only can State judges be impeached, we also hold retention votes on judges and the State supreme Court can also remove or force a judge to retire.

I have to gasp) agree with the Democrat Rep Jackson. Due to the judge’s ruling ABSOLUTELY NO law passed by the legislature is constitutional.

Well, they’re individually constitutional, you see, until this judge invalidates them because of the gerrymandering.

So it doesn’t invalidate anything, just gives this district judge right-of-refusal on legislation. He hereby appoints himself gatekeeper on which legislation will survive.

Got it? The hubris is stunning. He really should be sanctioned by his professional associations, as well as being impeached and removed for this.

Just an aside: those gerrymandered maps that Superior Court Judge Collins refers to were approved by the Obama DOJ. Jus sayin

The real question is: ” Are the Democrats & Republicans united enough to impeach the judge?”