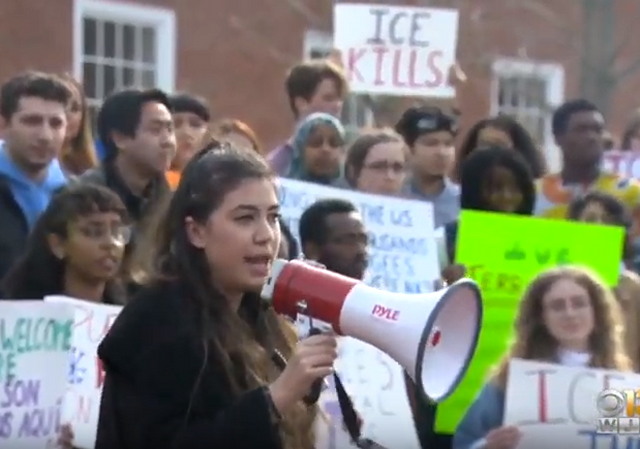 Students at Johns Hopkins University staged a walkout this week to protest the school’s ties with Immigration and Customs Enforcement.

ICE has become an object of rage for many campus leftists who view it as a symbol of Trump immigration policy.

In a call for change, hundreds of Johns Hopkins students staged a walkout Wednesday urging the University to cut its contractual ties with the Immigration and Customs Enforcement agency [ICE].

The walkout comes in the midst of a national debate over immigration under the Trump administration.

Over the years, Johns Hopkins has had several contracts with ICE.

But students say the walkout was the tip of the iceberg.

Students had started a petition and gained 2,000 signatures trying to force Johns Hopkins University to cut its contractual ties with ICE.

They feel as though they had been ignored by the University.

“We’re all really frustrated that Hopkins has failed to take our demands seriously,” Samantha Agarwal, a graduate student, said.

Here’s a video report on the protest:

To their credit, the administration at Johns Hopkins is not bowing to the pressure.

The student body at Johns Hopkins first organized a petition over the summer in response to reports of ICE’s practices of separating children from their parents at the border. The petition called on JHU President Ronald Daniels to sever ties with the agency.

“ICE is now currently responsible for the fabrication and maintenance of facilities across the country which have been described by scholars of the Holocaust as meeting the conditions considered definitive of concentration camps: indefinite detention without trial on the basis of identity,” the petition reads, in part.

The petition has reportedly garnered over 2,000 signatures. Daniels, however, rejected the petition.

“We believe that these programs serve the public interest by providing quality education and emergency medical training that ultimately benefit those who interact with the agency.” Lancaster reaffirmed to Campus Reform, while also reiterating that the programs were not in any way influenced by decisions of the Trump administration or Department of Homeland Security.

Another example of the inmates wanting to run the asylum !

Now we know. (They must have had their own versions of boehner, ryan, mcconnell, mccain, flake, corker, romney and the like as their bulwark against the fascists.)

Living through history can be as deadly as an untreated cancer. This is our time to destroy this cancer and fight for our freedom, if not our very lives.

Well, for one thing, it’s not a serious demand. It’s childish.

I doubt that we would have any illegals if we were treating them as bad as Jews were treated. This claim insults those who suffered and died during the Holocaust.

I would say they have no shame, but in today’s world you have to consider they may be that ignorant, given the sorry state to which history education has devolved.

“conditions considered definitive of concentration camps: indefinite detention without trial on the basis of identity,”
__________________

The “Holocaust scholars” left out some key details about the concentration camps, including this one: the Jews had no choice about whether or not to be in one.

Illegal aliens, on the other hand, make the deliberate choice to come into the U.S. illegally, and they do so knowing full well that they are breaking the law and that they may be detained for doing so.

While in ICE detention camps, illegal aliens are provided with nutritional meals, health care, and entertainment — all at significant cost to U.S. taxpayers — before they get their day in court (and their taxpayer-funded lawyer). Jews in concentration camps were barely fed, routinely beaten, forced to work, and ultimately executed. And of course the Jews had no recourse to the courts.

Any “Holocaust scholar” who claims that ICE detention centers are comparable to Nazi concentration camps is a blithering idiot whose ignorance and stupidity deserve to be loudly and widely mocked.

I wish professors would handle walkouts like this the way my High School Physics teacher handled Senior skip day: He gave the simplest quiz ever. The catch? The make-up quiz for those who were out was a right b*tch.

“Hmm, it seems a number of our students have chosen not to attend class today. Close your books, it’s pop-quiz time!”

I know, I know, it’s a pipe-dream. In reality today’s professors are probably the instigators.

I hope they do enforce standards. I would in my class.

Dark small contingent from what I could see

Many students sign crap and walk away without a second thought

You only need two percent of a population to succeed in a revolution.

“Johns Hopkins University respects and appreciates student and faculty efforts to engage in dialogue and debate on significant national policy issues, including the current discussion on immigration topics.”

Translation: Government contracts a far more profitable for this university than the worthless crap JH must tolerate for the price of your short-time tuition.

Hmmmm, 2000 students vs 2000 MD’s at the medical institutions. I wonder which has more power in the big picture. Unlike a small undergrad college, Hopkins could close the Homewood campus and it wouldn’t even be a blip on the radar. Oh yeah, those 3000 people down at APL as well. Hopkins does a pretty good job of keeping their profile off the radar, but they get more money than Harvard and MIT combined. I hope none of the signees were pre-meds, because they just screwed themselves out of any opportunities down on the plantation (our nickname for the Dome building)

I was in college when the Kent State shooting took place. I was a bit older than the average student because I was a returning vet. Many at the college was all upset about Kent State and wanted to walk out in protest. One math professor told the class that they could leave if they wanted and keep the grade they had up to that point. A bunch got up and then the prof said, “Of course your grade as of now is incomplete.”

Were I still a professor, I would have chosen last week for exams and quizzes.

There is no ICE in Hell.

There is no ICE in Hell.

The administration reaction was a total disappointment. This dragged on for days, and when the protestors eventually left, there was no repercussion or punishment for the protestors.

I wonder how a large contingent of engineering students would react today under similar circumstances.

Why would today’s engineering students bother? Even if they were inclined to complain, they know the political score.

You’re wondering about a University who:
– Got spanked by the US Supreme Court for violating the Solomon act, and nearly cost itself all its Federal contracts and property (Eg: Barton Hall) just because it wanted Federal luchre but wanted no military recruiters on campus?
– Misappropriated $59M dollars in donations with the net result of one of the primary players leaving and the other being promoted to CFO of Cornell?
– Has 10s of billions of dollars in the bank tax free but cries poverty to its own staff and the local community when it comes time to actually pay out money?

I think you’ve been gone too long to truly understand just how far SUNY Ithaca has fallen from the days of its founding by Ezra.

Perhaps the motto is now “I would found an institution where any illegal can find instruction in any study”.

There needs to be emigration reform to mitigate the collateral damage at both end of the bridge and throughout, and to lift the veil from the unknown faces of Planned sacrifices.

That said, ICE is a governmental organization that defends Americans’ civil rights. The State Department can lead the effort for emigration reform in second and third-world nations.

“Students had started a petition and gained 2,000 signatures trying to force Johns Hopkins University to cut its contractual ties with ICE.”

Best answer is who cares. If university caves, So what. College education is over rated anyways.

Just jack up their tuition rate to make up for the contract loss or eliminate their non money making liberal arts programs.

It is a private school anyways fills with a bunch of rich kids. Have the contract with public institutions instead to reduce tuition rates for state run schools.

“indefinite detention without trial on the basis of identity”

When did “breaking the law by crossing the border without legal authorization” become an identity? I thought it was an action.

……….because, of course, the purpose of putting illegal immigrants into these facilities is to murder them, correct? What pathetic, little minded fools….

The Chinese Communist Party Is Setting Up Cells at Universities Across America:
https://foreignpolicy.com/2018/04/18/the-chinese-communist-party-is-setting-up-cells-at-universities-across-america-china-students-beijing-surveillance/

THE 45 COMMUNIST GOALS AS READ INTO THE CONGRESSIONAL RECORD, 1963:
https://www.beliefnet.com/columnists/watchwomanonthewall/2011/04/the-45-communist-goals-as-read-into-the-congressional-record-1963.html

“Communism,” “fascism” – call it what you want. It’s the goal, and it’s working.

The success of installing the sinister ‘barack hussein obama’ (or whoever the hell he really is) as president was stunning. How we survived that rests squarely on our fortune that there is Donald Trump.

The success of installing the sinister ‘barack hussein obama’ (or whoever the hell he really is) as president was stunning.

If Obama was a plant by mysterious operatives of the New World Order, it remains a mystery why they used someone so lackadaisical and incompetent. If he hadn’t spent most of his time golfing, think of the damage he could have done if he’d actually been deliberately installed in order to bring about the Democratic Socialist revolution.

“We’re all really frustrated that Hopkins has failed to take our demands seriously,” Samantha Agarwal, a graduate student, said.

Shut up and go back to class young lady.

The walkout comes in the midst of a national debate over immigration under the Trump administration.

Oh, those cards at CBS. More “fake news.” There’s no debate over immigration. There is, however, quite a bit of disagreement about criminal invaders.

I attended the Johns Hopkins University as an undergraduate, from 1980-1984. Back then, during the week all we did was go to class and study. Our graduation keynote speaker was William F. Buckley, Jr. Times have changed at JHU.

Disappointed their demands weren’t taken seriously? Well, your demands have to be serious in the first place, not just self-indulgent liberal fantasy.

The whole “demands” trope should have died long ago.

An obvious question when someone makes “demands” (not to mention those ever-popular “nonegotiable” demands is, “Why do you think you have the right to make ‘demands’ of anyone?”

An alternate answer would be, “We have the right because existing authority is not legitimate.” The Declaration of Independence is an obvious example. But, these protesting students make no such argument.

And still another answer might be, “Because we can.” As when a robber declares, “Your money or your life,” a raw show of force may not make a demand legitimate, but rests on an implicit or explicit ” … or else.” And what is the “or else” here: are you going to burn the campus, or knife administrators who fail to comply, or just raise your voices and shout?

Why is the usual response to student “demands” not, “Who are you to make demands of me (or anyone else)?”

“We’re all really frustrated that Hopkins has failed to take our demands seriously,” Samantha Agarwal, a graduate student, said.
TRANSLATION: “We didn’t get what we want! WAAAAAAAAAAAA!!!”

There is an alternative to detaining illegal aliens: send them back!