Gladys Knight Steals the Show at the Super Bowl

Gladys Knight Steals the Show at the Super Bowl

The Empress of soul indeed. 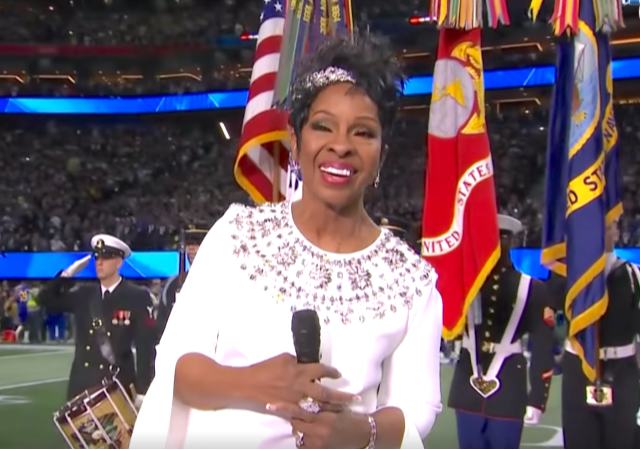 Gladys Knight, the Empress of Soul, belted out one of the best renditions of the National Anthem at the Super Bowl on Sunday night. She came under fire for accepting the gig from those who support Colin Kaepernick, but she smacked them down with grace:

“I understand that Mr. Kaepernick is protesting two things, and they are police violence and injustice. It is unfortunate that our national anthem has been dragged into this debate, when the distinctive senses of the national anthem and fighting for justice should each stand alone.”

Here is video of her singing:

Some have called it the best National Anthem they’ve ever heard. While I agree it was great, I still put it slightly behind Whitney Houston:

What do you think? Did you enjoy Knight’s rendition? Do you prefer Knight or Houston?

Gladys Knight did an awesome job with the National Anthem. I do think Whitney’s is a tad better,but I am impressed with how Gladys was able to side step the controversy over the taking a knee protests by other artists. It was a true pleasure to watch her performance.

Evidence of a truly classy and gifted artist. Stirring rendition.

I have not heard Whitney’s version, but just listening to the first few bars, I am so impressed. Beautiful.

I do not particularly like either version. Both have great voices — but while Whitney’s voice seemed noticeably better, Gladys’ seemed more heartfelt. However, it seemed to me that both strayed too much at times (not egregiously so) into attempts to showcase their voices, rather than singing purely and deeply from their hearts.

I’ve been searching through pages and pages of Google results for “great” and “national anthem”, and oddly it seems to be running around 9 female to 1 male in the versions suggested. I still haven’t found one that I really like, that seems solid vocally, with purity, passion, and reverence for the song. I’m rather disappointed.

Whitney proved that she can sing it as well as anyone when it comes to talent. But Knight’s is better because she confronted the threats to her safety and career and sang from conviction, making it clear she understands the meaning and significance of song. We need more patriots like Gladys Knight. She gets it. We are all Americans.