“I could do the wall over a longer period of time, I didn’t need to do this, but I’d rather do it much faster.” 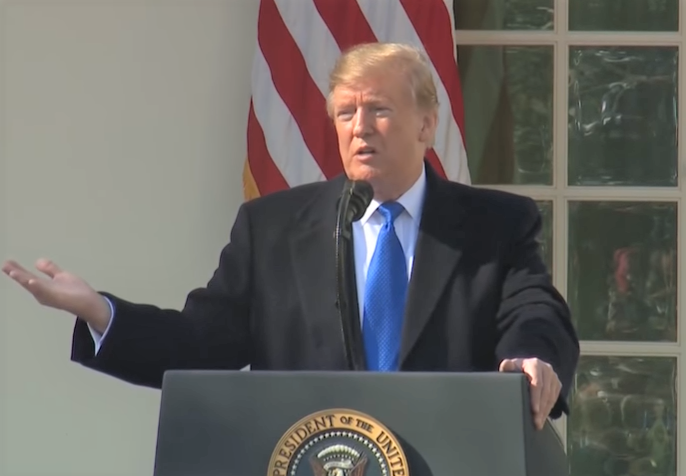 Opponents of President Trump’s declaration of a national emergency are practically orgasmic over his statement during his press conference that “I didn’t need to do this . . . . ” That statement supposedly will be devastating in court as an admission that there is no actual emergency.

But as with so many things #NeverTrump, the words are plucked out of a longer sentence and statement in which Trump makes the case for the declaration being necessary because a wall/fencing cannot wait given the crisis. The full statement, which I quote below, will be the one in front of a court, and an appeals court, and ultimately the Supreme Court.

Here’s the supposedly “damning” clip that has sent the anti-Trump #Resistance and #NeverTrump loons into a near-orgasmic frenzy:

Politico reports on the Democrats’ “pounce” on this isolated statement.

Those impromptu statements by the president — delivered during a sprawling news conference in the White House Rose Garden without the assistance of a teleprompter — have in less than 24 hours become Exhibit A in Democratic lawmakers’ arguments against what they view as unconstitutional overreach of executive powers by the Trump administration.

“He admits it’s a #FakeTrumpEmergency,” House Speaker Nancy Pelosi (D-Calif.) wrote on Twitter. “Hear him say it: “I *didn’t need* to do this, but I’d rather do it much faster.”

House Judiciary Committee Chairman Jerrold Nadler (D-N.Y.) on Friday sent a letter to the president, co-signed by the committee’s vice chair and subcommittee chairs, “to demand answers” on the emergency declaration and request that White House counsel Pat Cipollone and Justice Department officials testify before Congress regarding the announcement.

“We write to express our alarm over your proclamation … and your reassignment of funds approved by Congress for other purposes in order to access certain funds denied to you by Congress for the construction of a border wall,” the lawmakers wrote.

“We are particularly troubled in light of your statement today that ‘I didn’t need to do this, but I would rather do it much faster.'”

This clip is pretty typical Trump speak, actually, and for anyone who listens to the full presser and is used to listening to the president’s sometimes rambling statements, it’s pretty clear that he means that he didn’t need to declare the national emergency for the 2020 election. He emphasizes that the idea is to get the wall built faster than he’d have been able to do it with an “obstructionist” Democrat opposition who are focused on defeating him in 2020.

Here’s the NBC reporter’s question and the president’s response (transcript via WaPo):

QUESTION: Thank you, Mr. President. I just want to say when — in the past, when President Obama tried to use executive action as it related to immigration, you said the whole concept of executive order, it’s not the way the country’s supposed to be run. You said you’re supposed to go through Congress and make a deal.

QUESTION: … before a 35-day shutdown?

I went through Congress, I made a deal. I got almost $1.4 billion when I wasn’t supposed to get $1 — not $1. He’s not going to get $1. Well, I got $1.4 billion, but I’m not happy with it. I also got billions and billions of dollars for other things — port of entries, lots of different things, a — the purchase of drug equipment, more than we were even requesting.

In fact, the primary fight was on the wall. Everything else we have so much, as I said, I don’t know what to do with it; we have so much money. But on the wall, they skimped. So I did — I was successful in that sense, but I want to do it faster.

I could do the wall over a longer period of time, I didn’t need to do this, but I’d rather do it much faster. And I don’t have to do it for the election; I’ve already done a lot of wall for the election 2020. And the only reason we’re up here talking about this is because of the election, because they want to try and win an election which it looks like they’re not going to be able to do.

And this is one of the ways they think they can possibly win is by obstruction and a lot of other nonsense. And I think that I just want to get it done faster, that’s all.

Notably, just prior to this Q&A, Trump said:  “You know, we fight all over the world to create borders for countries, but we don’t create a border for our own country.”

Watch the full presser (the above begins around 28:40):

Throughout his responses to the media’s questions, the president repeated that the illegal aliens pouring across our southern border are an invasion, and that the wall will make it easier to keep Americans safe from gangs, drugs, and assorted crimes committed by illegal aliens.

In short, throughout this presser—as he did throughout his campaign and has throughout his presidency—Trump leaves no doubt at all that the border crisis is a national emergency and that he fully believes (knows) that to be the case.  Lamenting that the declaration of emergency could have been avoided seems perfectly reasonable to me.

And frankly, he’s right, he would never have declared a national emergency had Congress backed him on his key campaign promise.  They didn’t, so they left him little choice but to take this action, an action that shouldn’t have been needed, but clearly was due to Democrat obstruction and—we must also acknowledge—that of weak-willed Republicans who failed to keep their own campaign promises in this regard.

Well..
The sooner it get’s through the system, the better.
I am wondering how this will shake out… start building just as fast and hard as possible…?
Then, I suppose a stop-work.
I fail to see why with enough of a crew, 20 miles could not be constructed in days.
And Trump is a builder.
That is what I would do, I’d have 500 guys out there and run 24-7.

He didn’t need to do this….if half of the country didn’t suck.

The UniParty running the government.

True but they are electable because half the country sucks.

Constructing the wall now reduces the burden (not “burden” or fetus (a.k.a. “baby”) a la Obama) of the border guards, and the planned (not Planned a la Pro-Choice/selective-child) patrols of the National Guards.

Perhaps we could cannibalize abortion clinics, and use their legally and ethically impenetrable walls to secure the border, safeguard lives, and guide and quarantine the migrants traveling in good faith.

That said, there needs to be emigration reform to reduce the collateral damage from immigration reform, labor arbitrage, diversity, and social justice adventures at both ends of the bridge and throughout.

I heard that from lefties almost immediately after he made his Rose Garden speech. Amazing how I knew it was an out-of-context grab that would NOT be what he actually said and meant….. (I was working when he spoke, had not heard it yet.)

The tweet storm I read ran this way – “This quote should be the first sentence in every suit against this ‘manufactured emergency'” blah blah blah.

Trump knows he is within his Executive authority – and I love how he trolled the left by using one of Obama’s (many!) national emergency declarations to draft up his!!

I can only hope and pray he will be able to expedite this through the courts and it will FINALLY get done!!

Even 0’s former Border Patrol chief says the wall is needed, and it is an emergency.
https://DAILYCALLER.COM/2019/02/15/OBAMA-BORDER-TRUMP-WALL-POLITICS/

I object to the idea that everything the President does is now subject to Judicial approval.

Better, perhaps, but only if (1) the courts had uniform criteria for evaluating presidential emergency orders, and (2) apply these impartially to all Presidents regardless of party. Right now, #TrumpException rules the day.

Sounds to me more like, “I didn’t need to nuke Nagasaki . . . I could have told the Army to forget the cloud cover and the visual bombsights, go ahead and trust the radar sights—they work great, by the way, beautiful—and nuke Kokura as planned.”

I didn’t need to break that lying prog’s nose. If only he would have stopped lying to my face and insulting my intelligence. But eventually I got sick of his lying fucking mouth and I smashed his nose. Sorry, not sorry.

Trump had the easy choice of not bothering to care about the chaos and anarchy. It’s not a complicated story.

I don’t see that it matters the least little bit what he said at a press conference – if the law allows him to declare a national emergency then he can do so by declaration, without having to prove he “really” believes it’s an emergency. The real problem is that for a number of decades the executive and legislative branches consider it their duty to obey whatever nonsense comes out of the judiciary, even if it means flagrantly disobeying their oath to follow the US CONSTITUTION. We need to get back to a Jeffersonian and Lincolnian view of the Constitution.

I also got billions and billions of dollars for other things

And we now have a 22 trillion deficit also. I’d have rather he shut it all down and not only got the wall but a huge spending reduction.

America needs the wall because Democrats don’t want a border.

Dance around it as you will, but it was a dumb statement as he phrased it. Sadly, it matches his dumb strategies on this issue for the past 2 years.

“we must also acknowledge—that of weak-willed Republicans who failed to keep their own campaign promises in this regard.”

Weak-willed? Fuzzy, nothing weak willed about it, they are absolutely on the other side, as anti-American as any of the democrat party members.

I’ll stick with the Constitution. Donald “Big Beautiful Doors” could have had his wall years ago if he really wanted one.

This won’t stand, and it damn well should NOT.

It looks to me like the wall will stand shortly. In the meantime Trumps could have military drones deployed along the border. They could make entertaining videos of illegals trying to outrun Predator missiles. Scavengers will quickly clean up the mess.

There are no “scavengers” that could clean that up. The American people would simply sweep away any psychopath who did that with a very clean broom.

Rags and I agree about how fast we could have had the wall: President Trump should have issued this declaration on Jan 21, 2017.

When he said, “I didn’t need to do this.” he meant this shouldn’t be necessary if the US congress was full of traitors.