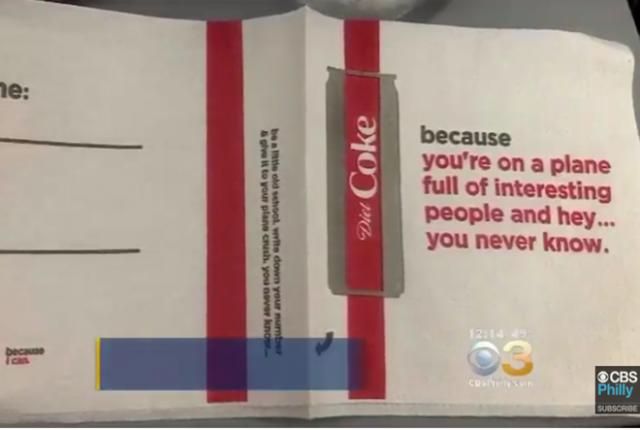 Last year at this time, Delta joined the anti-second amendment mob and announced it was ending discounts for NRA members.

Just in time for Valentine’s Day and in a marketing move nearly as full of fail as the NRA stunt, Delta Air Lines has apologized for creepy in-flight napkins that invited passengers to write their phone number to pass onto their “plane crush.”

The airlines said in a statement that it was already in the process of removing the offending Diet Coke napkins from flights even before a social media outcry from passengers.

“We rotate Coke products regularly as part of our brand partnership, but missed the mark with this one,” Delta Air Lines said in the statement to USA TODAY. “We are sorry for that and began removing the napkins from our aircraft in January.”

Coca Cola echoed the sentiments with its own statement:

“We sincerely apologize to anyone we may have offended. We worked with our partners at Delta to begin removing the napkins last month and are replacing them with other designs.”

A look at the reactions confirm that the was result was…unexpected.

What Einstein came up with this gem? #crisiscommunications #Delta #coke #CocaCola https://t.co/iTs9C8S2nJ

On the other hand, there were a few fans of the napkins.

Hi @DietCoke. If @Delta doesn't want the 'creepy' napkins, I'll take 'em. Planes aren't the only place to meet peeps. I am crushing all over the world. Please send 'em JUST IN TIME for Shmalentines Day. Good looks, ya'll. pic.twitter.com/mEZqC8ZTe9

One has to wonder about the age and practical marketing experience of both the Delta and Coke teams. This approach has all the earmarks of millennials addicted to social media, unaware of normal personal boundaries usually implemented in human interactions.

On one side of the napkin it read, “Because you’re on a plane with interesting people and hey…you never know.” The other side had space to write down a name and phone number, with the additional text, “Be a little old school. Write down your number and give it to your plane crush. You never know…”

Delta passengers apparently did not take kindly to the approach, and dozens wrote to the brands on social media, calling the stunt “creepy.”

The good news for Delta: The napkins are still not nearly as bad as the spectacular advertising disaster that Gillette created with its “The Best Men Can Be” campaign.

However, the year is still young and social justice orienting marketing teams are hard at work…so expect even more advertising disasters until common sense and good taste return.

I don’t think this rises to the level of being a “bad” thing. So somebody engaged in a foolish marketing approach. So what?

Grow a little tolerance. Shake your head and move on.

We’re just calling it a dumb marketing ploy, not calling for a boycott of either diet coke or Delta.

I don’t drink soda and I don’t want my airline taking political stands, so I don’t fly Delta. NRA members are never involved in mass shootings.

Except when they’re taking out the bad guy.

A bunch of bad guys then, mass shooting = 4 or more deceased.

Sorry, forgot to point out that the four are not related (i.e. officially a family member going off the wall and killing five family members is not chalked up as a mass shooting).

Not a soda consumer but the thought of an ad hoc quickie, at altitude, could get the elevators deployed, even from a gear down, short approach, and slip to landing. Nose up, with a full stall landing!

Yeah, passing someone your number uninvited does seem a little old school and something that would get you accused of sexual harassment by a shrieking harpy “new school” feminist.

A Millennial thought of that. What could possibly go wrong??

You’re on a plane with interesting people and hey . . .

Sitting here trying to figure out how this could have been worked into the “Airplane” script.

After subtracting the two hours for being molested by TSA I can drive most places and not have to rent a car. I don’t fly anymore.

Diet coke is for fat people to feel better about themselves after they eat a dozen donuts.

Your Point? (Grabs another donut)

Or for educated people who understand it’s not really a good idea to suck down the equivalent of 10 teaspoons of sugar in the average can of Coke.

So if this were a movie would it be; “Trouser Snakes on a Plane!”?

Yea I am gonna go ahead and apologize for that one right now, lol.

Clever and funny, thanks for the chuckle.

I feel safer when flying on an airline run by intelligent people.

I’m Ashamed to say I’m a Delta Retiree. When Delta cancelled discounts for only NRA members and not other groups they showed their Bias. Now their failure to manage what the passengers are shown shows their Utter Ignorance in running the company. Welcome to the so-called “Leaders” of today !?!?