The defamation lawyer tweeted a video that has crucial footage ignored by the MSM. 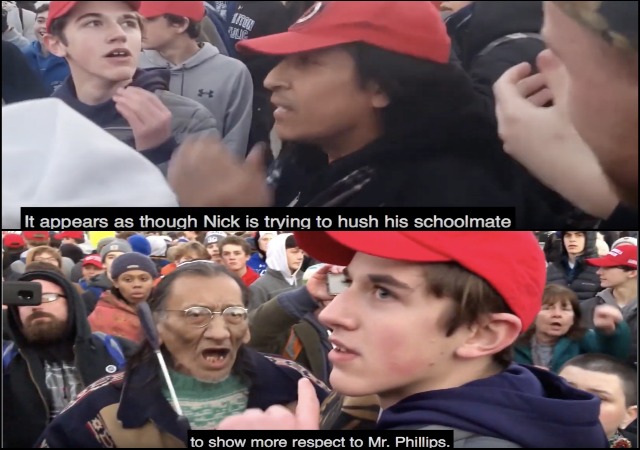 Lawyers for Covington Catholic High School student Nick Sandmann and his family have sent preservation letters to media and celebrities. These letters hint at possible libel and defamation lawsuits due to the treatment Sandmann received from these entities after a short video went viral of him on the Lincoln Memorial with Native Americans.

Sandwood’s libel and defamation lawyer Lin Wood has also circulated a 15 minute video in an effort to show that his client did not confront or antagonize Nathan Phillips and others as many said since they relied on the short video that took off on Twitter.

Some say a 15-minute video is too long to go viral. Will we allow incomplete 30-second video clips to be basis for agenda-driven false accusations & threats against a 16-year old student? Please share the full truth about what was done to Nick Sandmann. https://t.co/QGglyZwiIa

The video already has almost 45,000 views. About 6 minutes in, the lawyers show footage that the media ignored. It shows one of the Native Americans getting into the face of one Sandmann’s peers. As the chants from the Native Americans grow louder, Sandmann looks back at his peer and signals to him to stop talking. 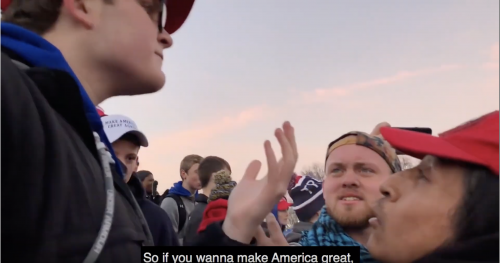 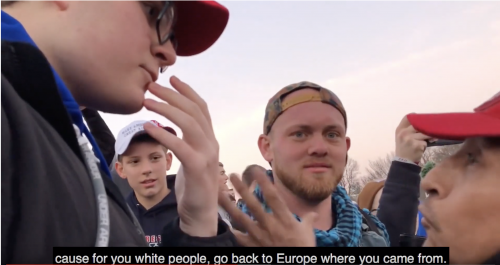 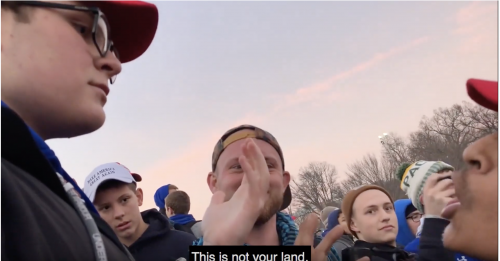 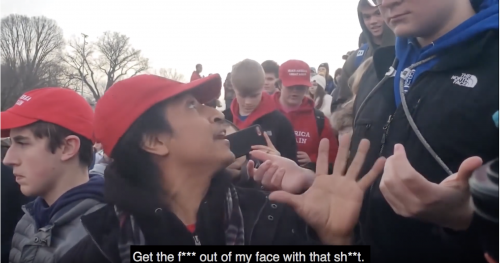 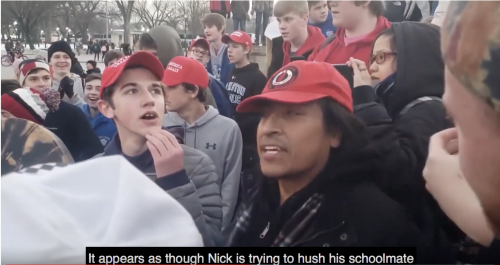 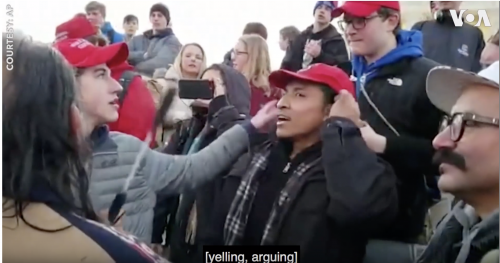 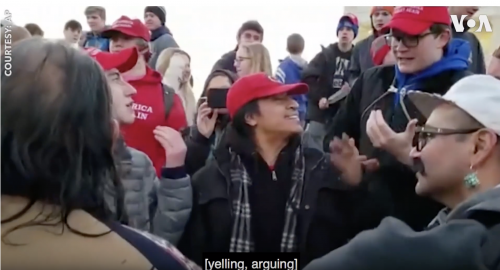 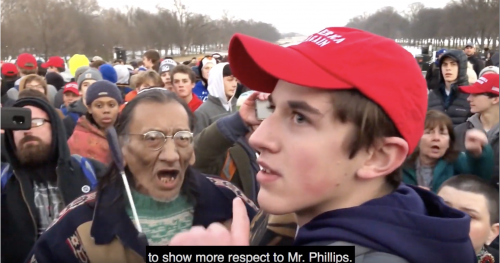 From The Cincinnati Enquirer:

The list includes 50-plus names of organizations or individuals: from presidential hopeful Elizabeth Warren to actress Alyssa Milano; individual journalists including Maggie Haberman, Ana Cabrera and David Brooks; national media outlets like the The New York Times, CNN, GQ and TMZ; and the dioceses of Covington and Lexington as well as the archdioceses of Louisville and Baltimore.

Nick, as well as his school, faced threats from those angered by video showing him, his classmates and Native Americans engaged in a much-debated confrontation. Some of the students wore “Make America Great Again” hats. Some students chanted and performed the tomahawk chop.

The legal counsel representing Nick and his family, Todd McMurtry and experienced libel and defamation lawyer L. Lin Wood of Atlanta, have said they will seek justice for the harm allegedly done to the teen.

McMurtry said an example of false reports were those saying Nick got into the face of Phillips.

McMurtry added his belief that some in the aftermath of the incident “permanently stained (Nick’s) reputation.”

Seven lawyers have devoted all their time lately to review all media over the events that occurred at the Lincoln Memorial. McMurtry said they “concluded we have a good faith basis to sue” some of the media outlets, but that “not all the organizations who were sent letters will necessarily be sued.”

The Cincinnati Enquirer listed all of the 54 entities in its article. McMurtry stated that they “don’t want this to happen again” and hope to teach everyone the lesson that “the media cannot state as fact things that aren’t true.”

The letter asks the recipients to “preserve all information that may be relevant to the Sandmann Matter” from January 17 to now in case Sandmann and his family decide to “pursue litigation.” The lawyers remind them that “[T]his obligation extends to all persons controlled by, or affiliated with, XXXXXX.”

Preservation Letter by on Scribd

Good luck I hope it pays off.

Looks like there is about to be a big can of legal whoop-a$$ to be opened on Hollywood and Media. Good.

Stone age. No not just stone age but millions of years before the stone age. Back when everything was clumps of shinny protoplasm floating in an endless ocean. Sue them back to that time.

The media and celebs that piled on MUST be forced to pay a price for their liberal agenda driven hatred! That is the only way the will ever learn a lesson from this (the right lesson, which is one shouldn’t pile on to a child because of their political views).

Richard Jewel’s lawyers made every news group pay that slandered him. Hopefully, these kids’ lawyers follow that same path. And, they go after the twitter feeds too.

It’s about time. People get on Twitter and libel people regularly, from what I’ve seen. Negative consequences might help the situation.

A lot of people have already recoiled in horror at their mistaken erroneous responses. This letter should reduce the number of defendants to the koolaid drinkers.

Perhaps their apologies could reduce punitive damages, but we need these defendants to understand their obligation to get facts before spouting off. Saying your sorry does not make the tort disappear.

I hope this bears fruit…it’s time for this garbage nonsense to stop.

Nick Sandmann is a heroic young man based on his actions. He behaved like the adult while Grandpa nut job and his younger propagandist threw their tantrums and spit out lies.

I’ll also say that he showed more restraint than me as an adult. The sickening display makes me want to take that drum and use it to knock the rest of his mangled teeth out.

the last statements saying we f*ing beat them grandpa was pretty damning.

I expect all non-public evidence to be deposited in the memory hole.

Failing to preserve evidence after receiving a preservation letter can itself be another tort. All such destroyed evidence can be presumed by the trier of fact to be against the interests of the party that destroyed the evidence. Such destruction can lead to huge punitive damage awards.

Which brings to mind the obvious question, why hasn’t Hillary and her associates been charged at least on this ground if no other?

Well, then Hillary’s in a peck o’ trouble, then, huh?

It can be very hard to remove all traces of evidence from a hard drive.

Gee, it’s almost like the “indian elder” and the press and celebrities who helped push his agenda are all just a bunch of motherfucking liars.

I have heard that also a critical component of this lawsuit is that the media has gotten used to smearing people who are ‘public figures’.

AT THE TIME, the Covington boys were in no way, shape or form ‘public figures’, and thus have a significantly lower burden of proof to collect damages in a civil suit.

Yes, that would seem to be the key to this case.

the biggest problem is the lawsuit has to survive the judges

“Malice” in defamation law doesn’t mean they hate him, it means they know what they’re reporting isn’t true, or that they completely don’t care whether it’s true.

The Covington boys are going to run into a problem with that; even as completely private figures, they can only sue those who reported facts that weren’t true. Calling Sandmann’s smile a “smirk”, or calling him “disrespectful” is an opinion, not a fact, so it’s immune from lawsuits. On the other hand alleging that the boys swarmed the Indians, when in fact it was the other way around, is a statement of fact, so they can sue for it. Also anyone who accused them of saying hateful things can be sued, because the video shows they didn’t.

I mean specific hateful things, not that they characterize the things they did say as “hateful”. That would be opinion. But if the report put specific words in their mouths, and they didn’t say those words, that’s a factual allegation, which is objectively false and therefore actionable.

“defamatory language is broadly construed as language that ‘tends so to harm the reputation of another as to lower him in the estimation of the community or to deter third person. ….It is for the jury to determine whether a defamatory meaning was attributed to it by those who received the communication.

I recall you opined that there was no Federal cause of action in the Florida State Election cases. Yet Federal Courts granted relief.

In Kentucky or anywhere else, statements of opinion, including conclusions such as calling someone racist, cannot be actionable; the first amendment forbids it.

Their being minors is also an important factor.

I don’t see how. It’s no more actionable to defame a minor than an adult.

. . . and hope to teach everyone the lesson that “the media cannot state as fact things that aren’t true.”

Sounds like restraint of trade. We’re talking about The Media—fake news. If not for fabrications, they’d have nothing to run but adverts, weather reports, and the funnies.

Question – why is Mr N Phillips not listed?

What a fine young Man.
I am quite proud of him.

Here’s Eugene Volokh’s very pessimistic take on the prospects of any lawsuit.

In related news, Gavin McInnes is suing SPLC for defamation

On a plus note, less than 3 months now until Oberlin gets their day in court, on May 1 no less. Oh the irony.