Democrats and Republicans alike paid tribute to a remarkable man at last night’s State of the Union address. 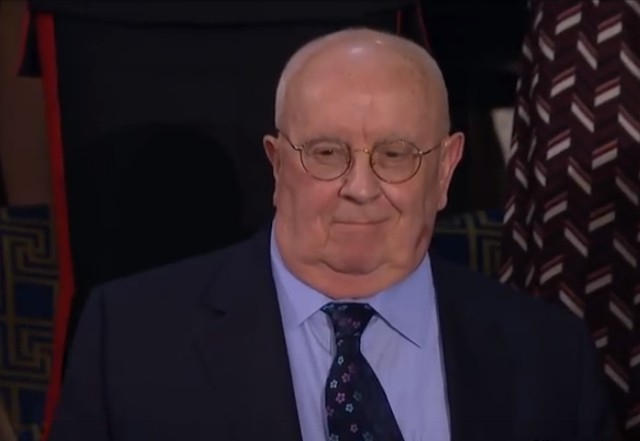 The President, members of their party, and their detractors are usually the people who take center stage at annual State of the Union addresses.

But perhaps the best moment of President Trump’s address to the nation was when he introduced Judah Samet to those in attendance and those watching at home.

Tonight, we are also joined by Pittsburgh survivor Judah Samet. He arrived at the synagogue as the massacre began. But not only did Judah narrowly escape death last fall — more than seven decades ago, he narrowly survived the Nazi concentration camps. Today is Judah’s 81st birthday. Judah says he can still remember the exact moment, nearly 75 years ago, after 10 months in a concentration camp, when he and his family were put on a train, and told they were going to another camp. Suddenly the train screeched to a halt. A soldier appeared. Judah’s family braced for the worst. Then, his father cried out with joy: “It’s the Americans.”

You can watch the moment Trump introduced him, and as Congress interrupted and broke out in a chorus of “Happy Birthday” to Samet, below:

In addition to Samet, President Trump praised SWAT Officer Timothy Matson, who was shot seven times during the Tree of Life synagogue massacre while trying to tackle the gunman. He also honored Joshua Kaufman, another Holocaust survivor. Both were in attendance last night as Trump’s guests.

Samet was profiled by the Tribune-Review in advance of the State of the Union:

The Hungarian-born Samet, a former Israeli Army paratrooper who survived the Bergen-Belsen concentration camp as a child, was four minutes late to Saturday services at Tree of Life on Oct. 27. By the time he pulled into a handicapped parking space at the synagogue, Samet could hear shooting and was urged by another man to leave the area.

He stayed in his car and watched accused gunman Robert Bowers engage in a shootout with police outside the building.

As to whether or not he supports Trump, Samet didn’t hesitate to go on the record:

“I’m going to say a Jewish blessing that you say only when you meet a head of state,” Samet said. “I have permission to do it.”

Samet describes himself as a Trump supporter.

“I like him very much. He is strongly pro-Israel,” Samet said. “That a man would go outright for Israel and declare for Jerusalem to be the capital of Israel … that was something new.”

Indeed, it was a first – as was Congress breaking out in song during a State of the Union address in honor of an amazing, resilient man.

It was one of a few very touching moments in the SOTU Address. As it was unfolding I was hoping President Trump would capitalize on it and say something like it’s great to see both sides of the aisle come together like this and it shows it can be done to solve problems as well. Still, it was a great and honorable thing to do by all.

Any comment by Trump would have ruined the moment. He did the right thing!

What do you mean, “One of the few touching moment?” There were only a few parts of the speech I didn’t like and I’m not going to dwell on them. Overall the SOTU was a tour de force.

I admit I thought Trump was going to be a disaster as President. But he’s really grown in office. The Democrats think they’ve destroyed his presidency when he agreed to reopen the government without getting wall funding. They don’t have eyes to see or ears to listen or a functioning brain. Trump has them totally outmaneuvered.

It was a heart-warming moment. We need more of this and less anger and vindictiveness.

2019, the year SOTU beat out the Super Bowl for greatness.

Then, his father cried out with joy: “It’s the Americans.”

Makes me proud to be an American. I hope we don’t lose it.

Can you imagine the feelings when they saw “It’s the Americans.”