Some Socialists are more equal than others 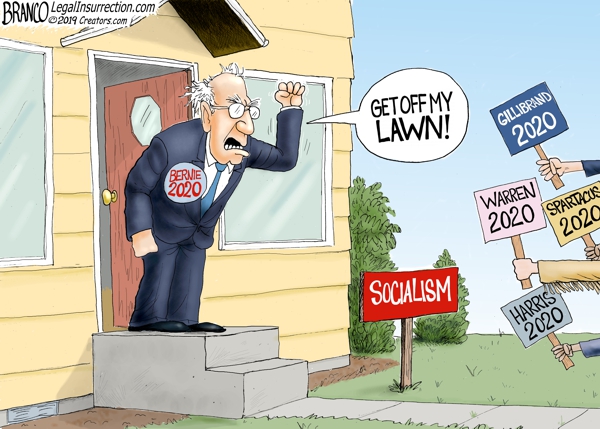 Could probably be any one of the three the old socialist owns.

notamemberofanyorganizedpolicital in reply to rinardman. | February 21, 2019 at 5:20 pm

But that is 24-caret solid gold siding on the house.

By then she will be half way up the hill. Warren is over over the hill. Biden is feeling the hill. Spartacus is looking for a hill to die on. And Clinton is a Hill far away.

Biden is further over the hill than Warren is.

That’s because running in moccasins slows you down.

Could someone tell me what a socialist is. I know what it used to mean 100 years ago, but Bernie obviously isn’t a Socialist by past standards and definitions. So what is he, a welfare state capitalist, a 1930’s New Dealer, a self-deluded Ponzi scheme politician, or what?
I was taught that words, as symbols for mental concepts, had fixed meanings. I was taught that concepts were contextual, and that within a given context, each concept could be defined with a genus and differentia. As a child, I was taught to look up a word (a concept) in the dictionary when I did not know the meaning (the referents in reality) of that word.
That was then, this is now. Now “words mean whatever the speaker wants then to mean, no more and mo less.” (I’m quoting Humpty Dumpty, from Alice in Wonderland.) Words are now used rhetorically, for the emotions they elicit or the effect they cause, not for any traditional or literal meaning they had in the past.
Bernie-speak is not in my dictionary, so I looked him up in Wikipedia. I still have no clear idea as to what he represents. It seems that the leftists like Bernie have reversed the traditional meaning of almost everything we thought we knew, starting with the critical concepts of our vocabulary, and even the secular form of the 10 commandments. I think he’s a secular anti-Semite preaching the pseudo religion of Altruism.

RE: the comic, Sanders yelling at right-wing Democrats is quite fitting. Branco is correct here, corporate democrats *should* get off Bernie’s lawn!

We call him a socialist because it is nicer than what he really is. Socialism is just the mechanism that he wishes to use to reach his end goals.