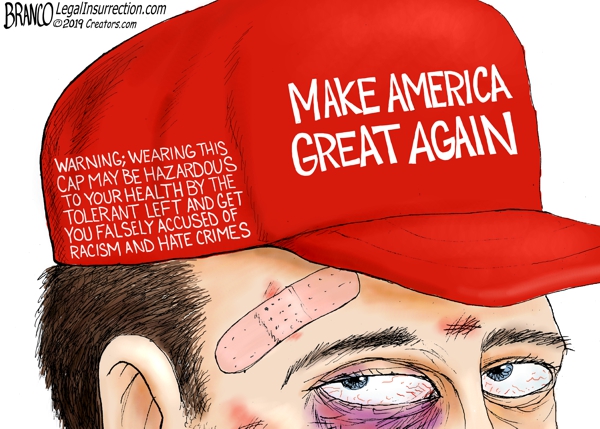 Spot on – as always!

I see online that these hats can be purchased for about $3 each, delivered in lots of ten. Maybe groups could take extra hats, offer free hats to those who join in offering praise for Trump.

notamemberofanyorganizedpolicital in reply to JusticeDelivered. | February 25, 2019 at 10:53 am

Even a plain $1.00 store red cap
will TRIGGER the Communist-Democrat
Leftists I have discovered!

Valerie in reply to notamemberofanyorganizedpolicital. | February 25, 2019 at 10:58 am

Trigger, my shining a….. Triggering is something real, in mentally ill people with low ability to govern their thoughts. It does happen to trauma victims.

These people aren’t “triggered.” They are using triggering as an excuse for bullying, after being encouraged by Democrat party politicians and political activists warehoused in our universities as “professors” to take violent action against American voters.

But, everybody has cameras, now, and they know how to use them and document the harassment. Grownups and courts are less inclined to buy this nonsense.

To be frank, a large part of the Democratic party are mentally ill, as are virtually all palestinians.

Those must be knock offs. Their is only one legitimate place to buy these hats and that is for $25 from the Trump website. That is where they should be purchased so the profits from the sales go to the Trump campaign and GOP.

I purchased my first MAGA hat in 2015 shortly after Trump announced. I bought a white one with gold lettering however. Given all the recent left wing attacks on the Red MAGA hat, A few weeks ago I ordered a standard Red MAGA hat and a White “45” inaugural hat. I’m looking forward to adding them to the rotation of hats I wear.

Not saying I disagree, but what is more important, getting someone to wear a hat and demonstration of more Trump support, the extra $25 in revenue?

Sort of depends on where you are when wearing the cap. I am positive nobody would give me any grief (but maybe attaboys) in my still somewhat rural part of Texas.

I mentioned hazard because that is the actual name of the pic which is part of the image url. It`s like a hidden message, or something.

Maybe the hats should have a hard shell liner, as suggested by the URL? My problem is I like mesh hats, my head gets too hot.

Catch 22 Warning: This hat is so dangerous that even if someone else with a different complexion wears it while committing a hate crime you will still be falsely accused.

Another good one !
And I’m probably going to embarrass myself with this but I never thought of the left as ‘tolerant’…more like ‘intolerant’
🙂