“I’m here because I think our country is in grave peril and I cannot sit any longer quietly on the sidelines.” 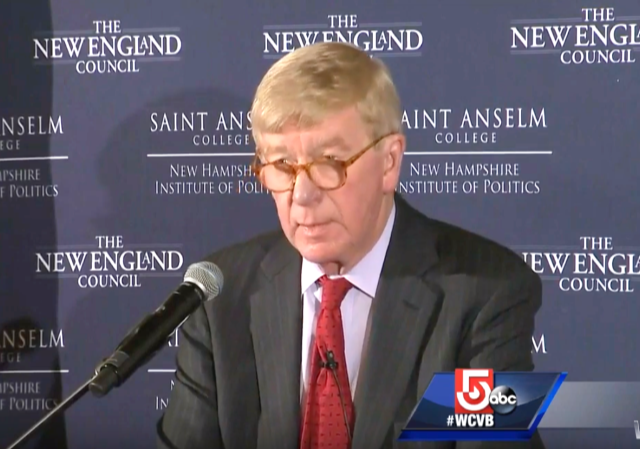 “I think there definitely is a path to victory, but you want to test the market a bit. I look forward to talking to a variety of people. You want to make sure the motion doesn’t fail for lack of a second but it won’t,” Weld said Thursday evening in an interview with the New Hampshire Union Leader. “Everyone I have talked to says you are running as an R, count me in.”

Fox News first reported on Wednesday that Weld, a very vocal Trump critic, would likely announce at “Politics and Eggs” that he was taking a step toward launching a longshot bid to unseat the president.

The former two-term Massachusetts governor during the 1990s is returning to New Hampshire again a week and a half after Friday’s appearance. Weld will speak Feb. 26 at New England College’s Town Hall Meeting Series, a popular forum for presidential candidates and potential White House contenders.

Weld ran as Gary Johnson’s vice president in 2016. He re-registered as a Republican recently.

Weld made his announcement this morning. From CBS Boston:

“I’m here because I think our country is in grave peril and I cannot sit any longer quietly on the sidelines,” Weld said.

Weld harshly criticized Trump in his speech, calling him a president who “openly praises and encourages despotic and authoritarian leaders,” “has railed against the very idea of the rule of law,” “has failed to call out and denounce appalling instances of racism” and “ridiculous and dismisses the looming threats from climate change.”

“Our president is simply too unstable to carry out the duties of the highest executive office of the land,” Weld said.

Trump has high approval ratings among Republicans, something Weld equated to “Stockholm syndrome, identifying with their captor.”

“I encourage those of you who are watching the current administration nervously but saying nothing to stand up and speak out when lines are crossed in dangerous ways,” Weld said.

Also, the New Hampshire GOP isn’t too happy with Weld:

“He ran as a Libertarian vice presidential candidate in 2016. As far as we’re concerned he’s a Libertarian and he can’t flip-flop back and forth for political expediency,” newly elected state party chair Steve Stepanek told Fox News recently. “We don’t consider him a Republican. We don’t want him back as a Republican.”

Stepanek, who served as co-chair of Trump’s 2016 presidential campaign in New Hampshire, explained that “if there is a legitimate national Republican candidate, then under the bylaws I have to remain neutral. I’m not going to be supporting them by any means, I’m just not going to be going against them.”

Sit down and shut up Mr. Magoo, you’re confused again.

This GOPe clown sat by the sidelines for the eight years a corrupt traitor being in the White House.

This is laugh out loud funny. Nobody outside of New England even knows who Bill Weld is.

This will keep Trump sharp for the campaign, like a ‘tune-up’ fight for the Heavyweight Championship

Libertarian. Right. Why not? That seems to be the default party for vague, confused liberals. I’ll bet he defines “libertarian” as “socially liberal but fiscally conservative”. That’s the problem with libertarians. Even they can’t seem to define what they are.

Half of the republicans voted into office hold to the same views as these vague Libertarian liberals. Rightists such as myself whine endlessly about this yet offer no alternative path.

Considering how California is now a jungle primary state? I wonder how the R’s will win anything outside rural valley and mountain region districts – which are routinely ignored by Sacramento.

Leftists were talking about screwing residents of the Carr fire /Shasta county out of wildfire aid because they voted for Trump.

It is not surprising that the old Country Club / Chamber of Commerce Republicans would put forth a candidate to try and take back the party. But – it is not going to happen.

The GOP has become a party centered around populists and working people. While not exactly marginalized, the old GOP is on the fringe of the Party. Not the center.

Weld is the RINO vote.

“I think there definitely is a path to victory”

That is what Hillary thought 🙂

I wonder if Bill Weld will be as big a sore loser as Hillary.

There is but Weld is not on that road.

And they hate us for being the base of “their” party. If they could figure out how to keep their position as a minority party without us, they’d kick us out in a heartbeat.

Yeah, Jeb! thought he could win the primary without the republican base.

As ridiculous as this is. He will be funded by Soros and co to draw whatever votes away he can.
Sometimes it’s just a difference of a few votes between the cheating and other people running

Actually I do know who he is because I saw a couple of signs with his name on them a few elections around and we live far from New England! At that time I thought, “don’t these people ever give up?” and I repeat that sentiment.

Can you believe the egos of these people? Of course, they are better than you and me.

Libertarian is to politics as Episcopalians are to religion.

Pink Floyd will be visiting bars and taverns all over America on his wheeled barstool. How many losing candidates can one state produce in one election? There ought to be a law.

How many people not just know about, but remember, Harold Stassen’s perpetual campaigns?

When asked a question on social issues, Paulsen would often say “I feel that it is too directly bound to its own anguish to be anything other than a cry of negation, carrying within itself the seeds of its own destruction.

However, to get to the meat of the matter, I will come right to the point, and take note of the fact that the heart of the issue in the final analysis escapes me.”

“Everyone I have talked to says you are running as an R, count me in.”
—
i’ll take “Things That Never Happened” for $500, Alex.

Not necessarily. In Mass., it’s more than likely that everybody he talked to was a Democrat.

Maybe he only talked to three people.

MA had more R governors during the 20th cent. than Ds. So far this century, it’s had 3 Rs to one D.

Not that it does any good.

You’re familiar with the acronym RINO?

William Weld, the only governor in the United States to ever appoint an official state astrologer, Darrell Martinie, the Cosmic Muffin. Yep, a serious candidate all right.

I wonder who is footing this BILL 😉

I would listen to his proposals however from what I read above he’s basically saying that “Trump sucks, vote for me”.
– He didn’t indicate a single administrative triumph from his 8 years a governor
– He didn’t say anything about illegal immigration
– He only said essentially “Orange Man Bad”
– He fully embraces the greatest scientific hoax of all time i.e. Global Warming
– He articulated no vision at all

In 2016 the so-called Libertarian ticket of Johnson-Weld also embraced gun control and “hate crime” legislation. I remember local progressives being seriously POed with the Libertarians trying to out-flank Democrats on the left. They worried the Libertarian Party would take votes away from Hillary! and cost Her the election (Jill Stein and her greeniacs never entered their thoughts).

No, you don’t understand: ge said he “cannot sit any longer quietly on the sidelines.”

So he has to say something, even if it’s stupid.

Weld should invest in a higher quality toupee and a more realistic hair coloring …. because he looks like an aged-out Ken doll sporting TrueLife(tm) monofilament fishing line hair.

The Charlie Crist of New England, a political chameleon.

Weld, another commie has been that no one ever heard of. It does make for a good laugh.

Bill needs to find an ingénue, at least 40 years younger than he, and click his heels together three times.

Trump is only president in history to fight both political parties, media, socialists and the establishment. I only voted for him because of his promise on judges but now I am a full fledged supporter. He is exposing the lazy ass senate and representatives for what they are. Go Trumper, GO!

Also forgot to include that Trump is FIRST president to make the Democrats worry about damage to the Constitution!

A gutless rino hack wants us to vote for him instead of the great Donald Trump.

Bill, go sell out your country with that other rino trash McConnell.