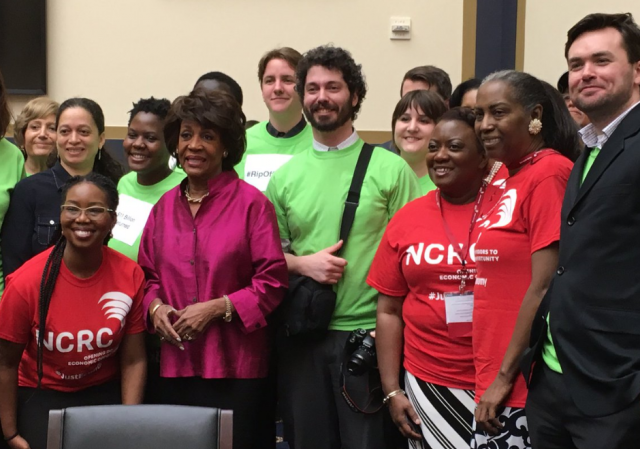 Joseph “Jose” Alcoff (also known as “Chepe”) was one of three Antifa mobsters arrested and charged for allegedly committing aggravated assault and ethnic intimidation against two US Marines.

Before his arrest, Alcoff was a well-connected left-wing activist with political connections in both chambers of Congress.

But while Democratic officials are distancing themselves from Alcoff now, until recently he was a well-connected, aspiring political player in Washington who may have even had a hand in key policy proposals.

His endorsement apparently mattered when several congressional Democrats in February 2018 issued press releases with his quote backing their bill on regulating payday lenders.

As the payday campaign manager for the liberal group Americans for Financial Reform, Alcoff participated in congressional Democratic press conferences, was a guest on a House Democratic podcast and met with senior officials at the Consumer Financial Protection Bureau from 2016 through 2018.

Alcoff met with then CFPB Director Richard Cordray and other senior CFPB officials on April 2016, again in March 2017 and a third time in May 2017, as first reported by the Washington Free Beacon.

During this time, he reportedly was an Antifa leader in Washington.

Alcoff’s former employer had little to say about the matter.

“As of December, Mr. Alcoff no longer works for AFR,” Carter Dougherty, spokesman for Americans for Financial Reform, told Fox News in an email.

The reader may remember the CFPB is Sen. Warren’s pet project.

According to a December report by Andrew Kerr of The Daily Caller, Alcoff used a number of aliases, one of which called for killing the rich.

Using the alias Jose Martin, Alcoff organized with Smash Racism DC, the group responsible for protesting outside of Fox News host Tucker Carlon’s home and for heckling Sen. Ted Cruz out of a restaurant.

They let the ‘Bike-Lock Professor’ off.
What are thee odds this guy serves time?

Now they are identified, perhaps some public spirited people will give them a very large taste of their own medicine.

I wouldn’t condone that, but I’d also rather the police follow the speed limit while responding

Democrats are becoming ever sociopathic.

Becoming? The Democrat party is ‘hostis humani generis’. They hate you and want you dead. Be prepared to act accordingly.

I think they should drop these two off in the middle of a big base, and let them play hide and seek with solders.

Actually the big base they need to be dropped on is the parade ground at Camp Lejeune. They’ll be asking for help from the alligators before the Corps is through with them.

LI really should step up coverage about the these insurgent neo-Maoist cultural revolutionaries and their ties to the new breed of democrat party House freshmen ect.

I recently rubbed elbows with two AF organizers from the SF bay area. Its not what you think 😛

Antifa showed up at a refugee camp for people burned out of their homes in the Paradise wildfire catastrophe. I was at the camp working as a freebooting volunteer sorting piles of food donations. I was there for 20 days doing 18 hour shifts. The two antifa guys and a small crew co-opted the local CSUC student socialist group. The main guys had cash from unamed sources and xat the same time were fundraising via the students.

I’ve a lot to say but long story short. The AF leaders were very intelligent, focused and were rigidly ideological. They had another AF crew come down from the Oregon rouge river region. They were all young 20 somethings dressed working class and a surprising number of them wearing leather work boots with kelties on them which is a very niche style of boots to keep welding sparks from falling into the tongue of a welders boots. But I digress. They were photographing walmart security – all guys I had come to know after working at the camp. The AF crews wanted to make them bout to be the bad guys etc. I was telling the AF guys that the Walmart security guys were a-okay folks. The AF didnt care and refused my entreaties to at least shake hands with them in the parkint lot. So later..

AF bay area and AF rouge river were planning an action. I narced them out to security which completely freaked the Walmart guys. Long story short.. Walmart fenced the tent area and shut everything down one day before AF’s planned action.

composed this on my phone which isn’t easy.

Sorry, what is AF, since you already spelled out antifa. Just for clarity.

AF=antifa since I was posting via my lousy phone. Rogue river not rouge river. Ugh.

The antifa guys from SF and a few of the students created a front organization called “north valley mutual aid.” I don’t think people giving money and goods to the NVMA for the relief of the Camp Fire refugees knew that at the time there was no promise to deliver those funds to people burned out of Paradise and Concow etc. — some of that money was going to hardcore non-migratory regional hoboes and druggies. Whatever the setup was, NVMA wasn’t declared a non-profit tax sheltered charity and thus no transparency. I asked those two guys from SF about this stuff directly.

So, like IRA and Sin Fein? They seem to keep to patterns.

The same tactics were used by the Fascists, in Italy, and the NAZIs in Germany, in the 1930s. This is all old authoritarian tactics.

Democrats have a history of violence: The KKK is often shown as the march but they murdered and burned. How many Presidents and wives have their own word – Arkancide (If I have the spelling correct)?

Now is the time for Trump and the federal government to go after the fascist left for violating people’s civil rights. Universities, ANTIFA and the local governments who protect them should be prosecuted for civil rights violations. Starting with the evil monster who tried to murder people by hitting them on the head with a bike lock. The prosecutor who charged him with a misdemeanor and the local government who ordered them he police to stand down so ANTIFA could attack protesters.

If these leftist goons keep getting away with violence, it is bound to provoke a violent reaction eventually.