Acosta appeared contrite when talking to the mothers, a stark contrast to his normal bombastic mode when reporting on border security issues. 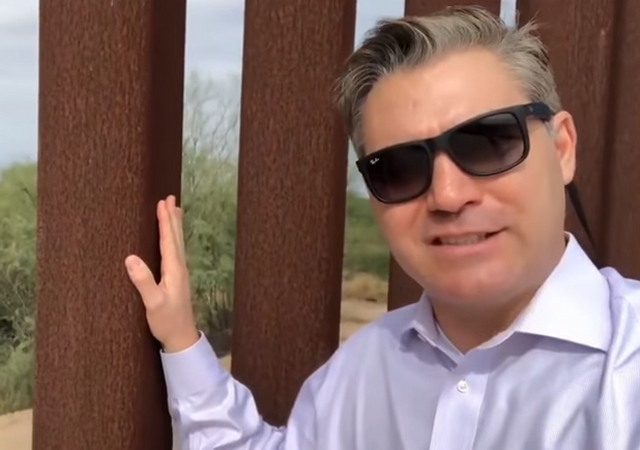 At a Rose Garden ceremony on Friday, President Trump announced a declaration of national emergency in an effort to address ongoing security issues at our nation’s southern border.

President Trump on Friday declared a national emergency to bypass Congress and spend roughly $8 billion on barriers along the southern border, a big step toward building his long-promised wall that also comes with significant political and legal risk.

Trump’s move, announced in a rambling, improvised address from the Rose Garden shortly after signing the declaration, will launch a fierce constitutional battle in the courts with lawmakers and outside groups who say the president overstepped his authority.

Trump took questions from reporters after his speech, and one exchange in particular with CNN‘s Jim Acosta—a noted Trump critic and discredited border security skeptic—raised eyebrows:

The clash came as Acosta challenged Trump over what he described as a “disconnect” concerning his description of illegal immigration.

“You are presenting information about what’s happening at the border, calling it an invasion, talking about women with duct tape over their mouths and so on, and yet there is a lot of reporting out there, a lot of crime data out there … that shows border crossings at a near record low,” Acosta said.

Trump fired back, “That’s because of us,” as the CNN reporter attempted to talk over the president.

Acosta – who has emerged as a hero among progressives for attacking Trump and members of his administration when they’re available to the press – then said stats show “undocumented immigrants committing crime at lower levels than native-born Americans.”

During the contentious back and forth, the president pointed to the Angel Moms in the crowd and told Acosta to tell them that the border security crisis was a made-up issue.

Angel Moms are mothers whose children were killed by illegal immigrants.

Incredible exchange as @acosta tells Trump he's "manufacturing a crisis" on the border, and Trump tells Angel Moms to stand up. pic.twitter.com/3br0aCzqSf

After that somewhat heated exchange, Angel Moms are discussing immigration with @Acosta. One mom who lost her daughter tells him “there is a huge problem..there are mothers going through this everyday.”
Acosta tells them he didn’t mean to offend, says “my heart goes out to you” pic.twitter.com/owkb9pUGUi

.@sabine_durden, angel moms confront @acosta for calling the crisis at the border “manufactured.” They have personal stories to prove otherwise. pic.twitter.com/4S0RXumCuX

During the confrontation Acosta told the mothers “my heart goes out to you” and said that he was “not trying to take away from anything” the mothers were trying to do.

Except when he does.

Just prior to Trump’s announcement and Acosta’s subsequent run-in with the moms, the combative reporter described them to CNN anchor Jim Sciutto during a news segment (bolded emphasis added):

“Jim, we believe those are some of the Angel Moms that the president has talked so much about out on the campaign trail, at rallies and so on,” Acosta said. “These are parents of victims who were allegedly killed by undocumented immigrants. The president likes to point to these folks who have been through some terrible experiences as evidence a wall is needed down at the border.”

The crisis is not “at the board” but about the border. Crossing the border isn’t the issue… what is done after crossing is everything especially to Angel Moms.

All this shows is that Acosta knows there is damage being done by illegals. As noted above… being contrite is important… also doing something about it is needed and that is where Acosta won’t go.

Being contrite is important; If you can fake that, you’re home free.

It’s not just the politicians. Journolists, or journalists of the left-kind, are mocking and insulting Americans who dare stand for civil and human rights, and, presumably, emigration reform to reduce the collateral damage from immigration reform at both ends of the bridge and throughout.

You know how dogs will sort of drag themselves in the effort to relieve perianal discomfort? Somebody’s Foster Grants just don’t cut it.

He really is a stupid looking guy, isn’t he?

He thinks that he looks like a cross between Dan Rather and Alec Baldwin. So far, he has learned some of their nuances.

I am wondering how long it will be until an angel mom rearranges his face after he has said something stupid. I see a “Die Hard” ending in his future.

jim acosta is a prop. The same as the actors sent out to sell toothpaste or term life insurance. He isn’t a journalist, he isn’t even a reporter. He has a job, a well paying job, but is in all probability not a bad person. That’s my ‘Benefit of the doubt’ take on it.

I wonder what Sean Penn thinks of him.

Mr. Acosta is in error.

One hundred percent of “undocumented” immigrants have committed a crime, by entering the United States illegally.

Why didn’t congress pass comprehensive immigration reform using reconciliation? They could have rewritten the asylum laws, make it a felony with 3 years in federal prison to be an illegal alien. With severe penalties for returning after deportation. Make it a felony to provide aid to illegals such as sanctuary cities. And fund the border wall construction.

If the progressive fascists could use reconciliation to pass ObamaCare then we should be able to use it to pass Comprehensive Immigration Reform.

Why didn’t congress pass comprehensive immigration reform using reconciliation? They could have rewritten the asylum laws, make it a felony with 3 years in federal prison to be an illegal alien. With severe penalties for returning after deportation. Make it a felony to provide aid to illegals such as sanctuary cities. And fund the border wall construction.

If the progressive fascists could use reconciliation to pass ObamaCare then we should be able to use it to pass Comprehensive Immigration Reform.