Tyson emailed Scott in Oct. 2017 about the alleged sexual assault. 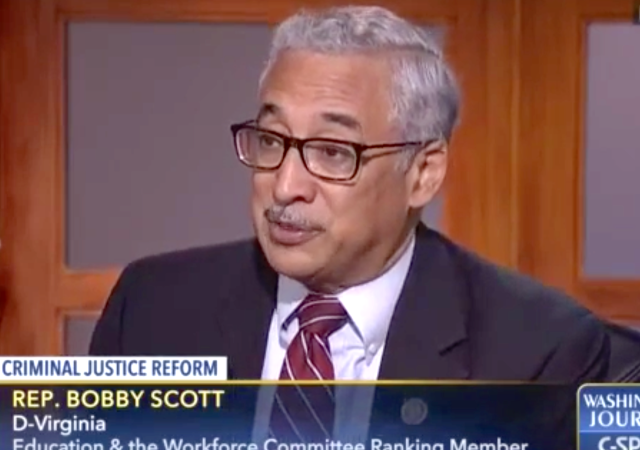 Professor Vanessa Tyson, the woman who has accused Virginia Lt. Gov. Justin Fairfax of sexual assault, released a statement yesterday with precise details about what happened that night in 2004.

In the statement, she wrote how she reached out to people in Virginia in 2017 when she realized Fairfax planned to run for office.

Democratic Rep. Bobby Scott is one of those men. Why is he just now letting this out?

In a statement given to ABC News on Wednesday, Scott wrote, “Allegations of sexual assault need to be taken seriously. I have known Professor Tyson for approximately a decade and she is a friend. She deserves the opportunity to have her story heard.”

Aides to Scott confirm to ABC News that Tyson first reached out him in an e-mail on October 20, 2017, expressing that she was “not a fan” of then-candidate for Virginia Lieutenant Governor Justin Fairfax.

In a Nov. 29 email, Tyson expressed her dislike for Fairfax and wrote that she would like to “talk about it,” with Congressman Scott.

Aides to Scott maintain that he was not made aware at that point about an alleged sexual assault in 2004 involving Fairfax.

In a text message exchange between Scott and Tyson in December 2017, she informed him that the now-Lieutenant Governor-Elect had a “MeToo allegation,” but at the time the congressman did not know that she was the accuser, according to aides.

Scott learned that Tyson was the accuser late December 2017 and early January 2018. Tyson told him she already went to The Washington Post. He agreed to speak with the publication.

Honestly, it sounds like he’s just trying to save his butt. His aides told ABC News that “Scott maintains that Tyson never brought up the allegations in the many years that they have known each other prior to the time period between December 2017 and January 2018.”

Um, okay, bro. That doesn’t mean it didn’t happen. Tyson wrote that the sexual assault made her feel ashamed and humiliated. She kept it to herself until the #MeToo movement gave her courage and she saw that Fairfax wanted to run for Lt. Governor.

The Washington Post decided not to run Tyson’s story due to “significant red flags and inconsistencies with the allegations.” I wonder if WaPo ever reached out to Scott or vice versa.

Two months after Tyson contacted Scott, a former aide accused him of sexual harassment. Macherie Reese Everson claimed the congressman “touched her inappropriately on two occasions in 2013 and that he flirted with her.” When she did not give into his moves, she claimed he fired her.

Scott denied he sexually harassed her or fired her. He stated that “she left with a letter of recommendation from the congressman.”

I think Fairfax is in over his head on this, but how can anyone establish what happened 14 years ago in a single incident? We are clearing the way for all elected and appointed offices to be available almost exclusively to females. The standard we are developing now — for answers to claims that are virtually unknowable — is presume guilt until innocence is established. Why can’t we expect accusers to make a timely complaint and prove it in either civil or criminal court? Perhaps special legal aid can be coupled with this policy so the accused can be confirmed or cleared at the time with rules of evidence being applied. Trial by media 14 years later sells papers but it’s not justice.

First, sorry about the down check, it is too close to the reply symbol for my fingers.

I agree with what you said, but if the democrats/progressives are going to make this the rule then they must be made to play by those rules also. One of the ways the GOP has earned the title of “the stupid party” is by taking the high road and allowing the opposition to go low with no real opposition. At the moment, I believe a special prosecutor should be appointed to determine if national security was compromised by having a Chinese spy working in the offices of a high ranking democrat. No,I don’t think this is how it should be handled but I am ready to play tit for tat until the playing field is leveled.

Please, can we move the up and down checks away from the reply button? You simply can’t avoid hitting the wrong one on a phone or tablet.

I agree with most of what you said, but there is no “we” in this deterioration of justice and fair play. The situation the country is devolving into was created by the genocidal maniacs running the Democrat Party and most of academia, Hollywood and the media. Progressives (read: communists) created this all by themselves.

I don’t know if Fairfax and Northam are innocent of what they have been accused of, but if they are it would pretty much exhausts their supply of innocence. Whatever the truth of the current accusations, the rest of their careers are an open book that cannot be wished away or minimized.

Mark above has a good point regarding defending an allegation 10-30 years after the fact.

However, comparing and contrasting Ford’s accusation against Kavanaugh, or the allegations against K Ellison or Franken, etc.

a) the overall description of the event was much more credible vs a circus atmosphere
b) the behavior was of a similar pattern to other behavior of that individual (The only consistency with the kavanaugh was his drinking, the alleged behavior against other women was totally inconsistent.
c) the accuser{s} appear to be significantly more mentally stable
d) the accuser{s} appear to be sigificantly less motivated by any political considerations

Correct, and there is an additional major factor from a law-enforcement perspective. In the Ford case, there was no specific time (even the year) or place that the event was alleged to have occurred. That makes it impossible for an innocent person to prove his innocence by showing where he was at that time. In most cases, charges cannot be filed without a time and place.
Tyson’s accusation against Fairfax includes the date, place, and time. Fairfax acknowledges he was there at that date, place, and time. That’s an enormous difference in credibility.

g) The accuser and accused were alone together at that time and place.

f) The accuser’s story has been consistent (at least AFAIK.)

g) The accuser doesn’t have lapses of memory covering not only the place but means of transportation to the place.

These don’t prove that the accusation is correct, but it narrows the universe of people who can make an accusation-this-convincing to people the accused spent time alone with.

Colleges have had a standard that allows regret rape. Consent can be withdrawn retroactively.

the dems are hoist with their own petard.

Either Fairfax is forced to resign, or the #IM WITH HER movement dies.

Seeing how tied into knots the Democrats are over these alleged racial & sexual incidents reminded me of one of my favorite Dowager Countess Grantham witticisms from Downton Abby: “Is it ever cold up there on the moral high ground?”

C’Mon man. This will go nowhere. It’s different when they do it.

Democracy dies in WAPO darkness. So according to the WAPO (Bezos Pravda) it is ok to run stories on Kavanaugh that have “significant red flags and inconsistencies with the allegations” because they don’t like his politics, but it is not ok to run similar accusations against Fairfax because the like his politics.

While I appreciate the irony of Democrats, who weaponized “#MeToo”, now being hoist on their own petard, Fairfax will not suffer from this. This is a totally unsubstantiated allegation. The alleged victim apparently told no one that it occurred for 13 years. No timely reports were made. and no witnesses exist. It is a gigantic nothing burger. By now the country should be more than aware that these types of allegations have been totally discredited.

What is of far greater importance is the radical legislative and political agenda that the Dems have embarked upon. From attempting to legalize the killing of an innocent infant, after delivery, to radical gun control measures, to green energy designed to destroy the economy, to single payer health care insurance for all, to taxing the rich at confiscatory levels, these people are out of their minds. Add to the that the weaponization of Congressional oversight to Get Trump and we have a recipe for a huge disaster. Priorities, please.

If only she was Blasey-Ford she’d get a congressional hearing and lots of media coverage, and the #MeToo crowd lining up behind her unconditionally. The difference in media behaviors is too blatant to ignore.

I bet when Prof. Tyson talks about her assault, she doesn’t use a correctly, little girl voice.

I bet when Prof. Tyson talks about her assault, she doesn’t use a correctly, little girl voice.

What did Scott have to do with Fairfax running for office?

Come on everyone, this is just like the homicides in Chicago. As long as it is black on black there is no news to report. This is being treated by the Dems the same way. If I was Tyson I would call the Dems and the msm out for not caring what happened to her but only about whites or white on black crime. She has been placed in the “Move on” category.