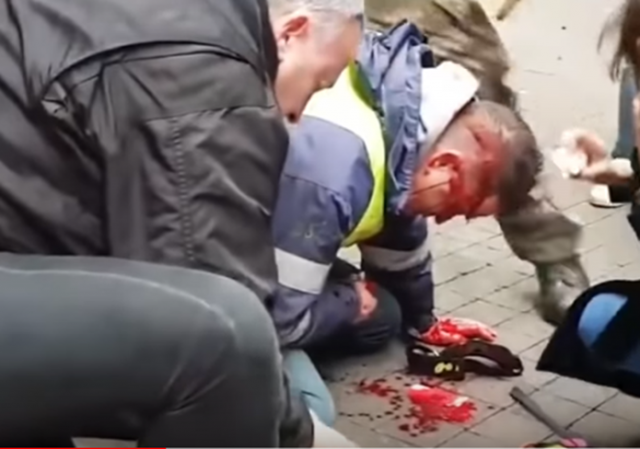 While the American press has been focused on President Trump and hamburgers, there have been serious developments related to the Yellow Vest protests in France.
A fireman was participating in the Yellow Vest protest movement is now in a coma after being shot in the head by a police officer using a flash ball gun.

Horrific images show Olivier Beziade, a father-of-three in his 30s, lying on the floor in Bordeaux on Saturday after being hit from behind.

He is wearing one of the high-visibility motoring jackets from which the Yellow Vests get their name.

Videos posted on social media also show Mr Beziade being treated by medics, with his head covered in blood.

Mr Beziade suffered a ‘very serious brain injury’ and is currently in an induced coma in hospital, said family members.

There have been many, other troubling reports coming from France as President Emmanuel Macron and the rest of the elite government officials scramble to contain the protest movement. For starters, there will now be bans on “participation in unauthorized demonstrations.”

Seven weeks into rebellion marked by weekly clashes in Paris and other French cities, Philippe said the government would introduce a “new law punishing those who do not respect the requirement to declare [protests], those who take part in unauthorized demonstrations and those who arrive at demonstrations wearing face masks.”

He also announced plans to ban known “troublemakers” from taking part in demonstrations, in the same way known soccer hooligans have been banned from stadiums in the past.

In future, Philippe said, the onus would be on “the troublemakers, and not taxpayers, to pay for the damage caused” to businesses and property during the protests that began peacefully in mid-November over taxes but quickly became more radical.

The presence of semi-automatic rifles at a demonstration by unarmed French citizens shows how President Emmanuel Macron’s law and order crisis spirals.

It comes after former conservative minister Luc Ferry called for live fire to be used against the ‘thugs’ from the Yellow Vest movement who he says ‘beat up police’.

British pundit Paul Joseph Watson has a wonderful summary of the continuing situation. He notes that when Antifa leftists were protesting, the progressives in power were sanguine with their destruction. However, when citizens demonstrate against excessive taxation and regulatory repression…”it is a dark harbinger of a fascist takeover.”

In a bold move, Macron is trying to channel “Yellow Vest” anger into a “Great Debate”. It’s the French version of the Tea Party townhalls!

Mr. Macron held a town hall in northern France on Tuesday with hundreds of mayors who he asked to help organize what he calls a great national debate, an unorthodox public forum for citizens to make legislative proposals—and blow off steam.

Mr. Macron has billed the “grand débat” as an experiment in direct democracy that he hopes will mollify protesters who have taken to the streets in recent months, burning cars, smashing storefronts and demanding his resignation.

“What I’m expecting from you is to act as facilitators, that is to help all those who want to conduct discussions at the local level,” Mr. Macron told the mayors on Tuesday.

I suspect that the shooting of a fireman in the head will not create an incentive for regular French citizenry to willingly debate with their globalist leaders.

A fireman? baaa-aad optics. That makes the protesters look like everyday people, the ones you know from down the street. A fireman – at least in the States, I am not sure about France – has a certain amount of hero status; deservedly so since they WILL run into a building while everyone else is running out.
granted the shooter did not know his target was a fireman, which in some ways makes the optics worse.

These protests are being done by actual Frenchmen and not just prissy Parisians. This shooting will escalate matters.

When you start vandalizing, setting fires, looting and attacking cops, you’re not protesters any longer. Unfortunately, protests bring out the anarchists and other assorted scumbags and turn into something that’s no longer recognizable. When they devolve into riots, the legitimate peaceful protesters need to step back and disavow the rioters. If rioters are injured at that point, well.. it’s a dangerous occupation.

We’re so glad Sam Adams didn’t listen to your ancestors.

Isn’t France supposed to be the moral highlanders of democracy………….

Exactly my sentiments from the beginning. 🙂

Oh dear the dreaded “semi-automatic weapons”…. the G36 is a real assault rifle with selective fire and is more than a “semi-automatic weapon”. Good grief this is so inaccurate but it is the UK press and ignorance is the foundation of modern journalism. The “live ammo” part is the real issue. That ups the ante. Of course the only people in France capable of going toe to toe with real weapons are the Islamic terrorists and I see them sitting this one out as infidel goes against infidel.

The yellow jackets will not go away, especially if the government opens fire. Time for a new republic…again… again and again?

Would not like to be Macaroni when they pull down the government. Or when the Military Junta steps in the secure the country Macaroni will be held publicly to quell the anger.

I’ll bet the new laws against unauthorized protests won’t be enforced against Muslims, or else Muslims will get authorization while native Frenchmen can’t.

Paging John Kerry. We need a statement. You know, how the “yellow vests” are racists or something along those lines.

What a concept: an authorized protest. What does that even mean? It sounds like something you would hear of in a dictatorship. So, is Macron now considered a dictator?

Could this be a Kent State moment?

France has a very long history of enacting laws that screw their citizens ,, then when they revolt the government violently attacks them. The Globalist Elitist , once again, screwing their citizens will lead to another Civil War !!

Macron now has blood on his hands which will not be so easy to wash off.
Anger will intensify.

What is it they say? “Inside every leftist is a Totalitarian screaming to get out”.

Mr. Macron held a town hall in northern France on Tuesday with hundreds of mayors

That’s NOT how you do it. 3-tiered governance, with Macron + mayors sipping lattes and the yellow-vests excluded, is how blue-state progressives exclude Deplorables via unaccountable, unelected Boards.

The Tea Party town-halls were direct communication between elected officials and the electorate. Small wonder the MSM went on a hate-fest against the Tea Party – for a short period, citizens could hold the grandees to account WITHOUT media intermediation, reporting by videos the hard questions the media would not ask.

If the French nobility is distressed at the expansion of hardnosed, un-progressive political parties, just let them continue with such 3-tier gabfests, and then watch the next elections.

If you start arresting the leaders they will move underground and you’ll have a real revolution on your hands!

A bit of a side-note, but I find it interesting that one must seek out alternative sources (here, Paul Joseph Watson) to find discussions of a situation that SHOULD be leading international news. When the mainstream news devolves into a partisan monolith, we need alternative voices. That’s why the coordinated effort of the Silicon Valley oligarchs to deplatform and demonitise anyone not toeing the liberal line is so concerning. (And that’s not criticism, Ms. Eastman. I think Mr. Watson, despite being a bit of a nutter with a serious potty mouth, has some interesting things to say. And he has the courage to actually say them, which is a rare quality any more. I’m not a fan of InfoWars, but I think Mr. Watson is worth listening to despite the connection.)

Macron gave the go ahead to use deadly violence to suppress the demonstrators.

I think an Emergency Meeting of the UNSC is needed to investigate and discuss the armed attack on unarmed civilians merely protesting against their oppression. oh, what, Israel is not involved. Never mind!