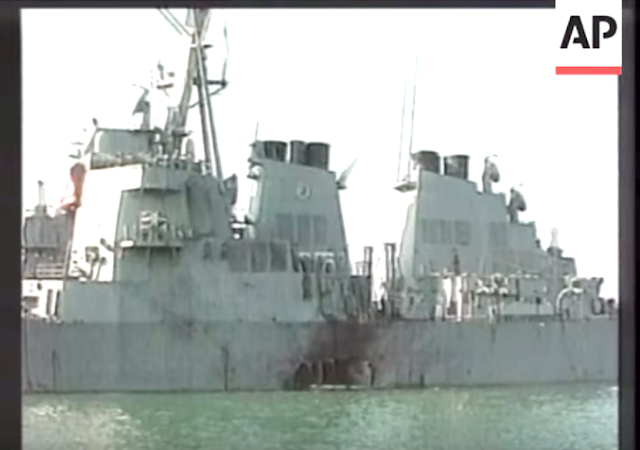 A US official told CNN today that an airstrike probably killed al-Qaeda terrorist Jamel Ahmed Mohammed Ali Al-Badawi, the mastermind behind the bombing of the USS Cole in 2000.

The attack killed 17 sailors and injured 39 others. Many believe the terrorist attack “foreshadowed the attack on the US less than one year later on September 11, 2001.”

While US Central Command, which oversees military operations in the region, later confirmed that al-Badawi was targeted in a strike, a spokesman said the US was still assessing the results.

“US forces are still assessing the results of the strike following a deliberate process to confirm his death,” he added.

The airstrike caught al-Badawi as he drove alone. Officials believe “there was not any collateral damage.”

The FBI had al-Badawi on its most wanted terrorists list. A federal grand jury indicted him in 2003 and he faced “50 counts of various terrorism offenses, including murder of US nationals and murder of US military personnel.”

Al-Badawi was arrested by Yemeni authorities in December of 2000 and held in connection with the Cole attack but he escaped from a prison in Yemen in April of 2003.

He was recaptured by Yemeni authorities in March of 2004 but again escaped Yemeni custody in February 2006 after he and several other inmates used broomsticks and pieces of a broken fan to dig an escape tunnel that led from the prison to a nearby mosque.

The State Department’s Rewards for Justice Program had previously offered a reward of up to $5 million for information leading to his arrest.

Not always fast, but always thorough….

At the time this attack occured it was my feeling that we should have responded by raining death and mayhem down upon Yemen. In my opinion, the only thing people in the Middle East understand is overwhelming force.

That’s what they say about us too.

Better that and they do not kill our people. Sticks and stones, you know? And only the scum will say we are wrong. Its good to be hated/feared by scum. All this PC foolishness has gotten us no where! Time to use our strength.

They do not have the ability to deliver even a small fraction of the force which we can bring to bear.

Another difference is that their successes are one time only events. Heck, by flight 93, that tactic was already useless (1/2 hr half-life?) OTOH, we can do the same thing time and time again with no diminished effectiveness. As Billy Jack put it, “I’m gonna whop you in the side of the head and there is nothing that you can do to stop me.”

Run them out of “virgins”!

The only reason they can offer so many virgins is that their martyrs all become totally impotent in their afterlife.

I disagree. It was Madeleine Albright who killed those sailors by ordering the Cole to refuel in Aden to further her “Women’s Initiative”. Then there was the Navy brass who ordered the sailors “not to shoot unless fired upon”. Who initiated that order, eh?