Trump Will Travel to Southern Border on Thursday

Trump Will Travel to Southern Border on Thursday

He will address the nation on the humanitarian and national security crisis on Tuesday night. 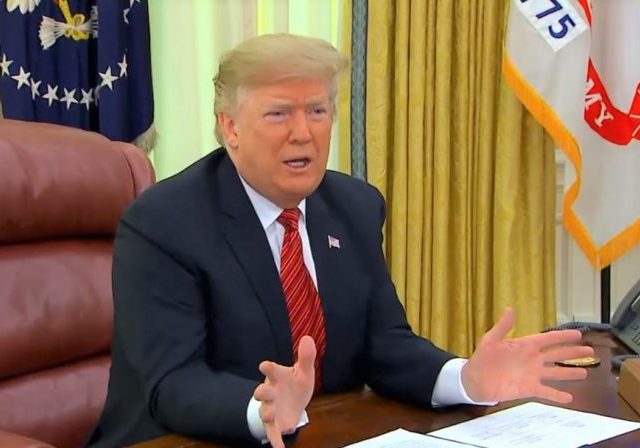 Press Secretary Sarah Sanders announced on Twitter that President Donald Trump “will travel to the Southern border on Thursday to meet with those on the frontlines of the national security and humanitarian crisis.”

Trump tweeted that he will address the nation on Tuesday night.

The announcement comes as the government shutdown entered its 17th day as Democrats and Trump butt heads over funding for the wall.

President @realDonaldTrump will travel to the Southern border on Thursday to meet with those on the frontlines of the national security and humanitarian crisis. More details will be announced soon.

I am pleased to inform you that I will Address the Nation on the Humanitarian and National Security crisis on our Southern Border. Tuesday night at 9:00 P.M. Eastern.

The visit will come on the 20th day of the shutdown. Most agencies ran out of funds by December 22:

Last week, House Democrats proposed a bill to fund the Department of Homeland Security, which oversees construction of the wall, at current levels through Feb. 8, with $1.3 billion for border security—a figure far less than Trump requested. Senate Republicans so far have not taken it up.

The president told congressional Democratic leaders during a meeting on Friday that he was willing to keep the government shutdown for as long as necessary — possibly months or even years — in order to get the funding he wants.

Trump wants $5.7 billion for a wall. After numerous meetings this past weekend, he “gave his strongest endorsement yet of a proposal to build a steel wall, rather than a concrete barrier, at the southern border.”

Trump considered that move a concession to the Democrats. He told reporters that the Democrats “don’t like concrete, so we’ll give them steel.”

Kemberlee noted in her Friday blog about the Friday meeting that Trump has considered “declaring a state of emergency, which would allow him access to DOD funds with which he could begin construction his big, beautiful wall.”

– Talked about using what he called “the military version of eminent domain” to seize private land for border wall construction. Conservative Republicans have long criticized the government’s use of eminent domain, and backed high-profile lawsuits to restrict its use.

– Said he would consider asking Vice President Mike Pence and other executive branch officials to forgo planned pay raises while the shutdown is in place.

Trump maintained that he wants $5.6 billion for border security and wall funding, and dismissed proposed compromises ranging from $1.3 billion to $2.5 billion.

Fuck the Democrats. Take the pay rises and shove it up the Democrats arses. They own this shut down so let them suck on that for as long as it takes to bring them back to reality.

Imitation is the sincerest form of flattery.

That said, dont flatter ignorant pigs of the left who cant express themselves without profanity.

Screw the liberals. They want to treat anyone who dares disagree with them like shit then treat them EXACTLY the same!

I dont give a rats arse about taking the moral high ground..all I care about is winning…to take a leaf out of the Democrat play book!!

Aside from taxpayers bearing the burden of 20-30 million illegals and at least 100 million spawn, even worse is that they will greatly degrade our gene pool. In a global competitive economy, our collective intelligence is one of our most valuable assets.

We really need to take immediate action to expel all illegals and their offspring.

So, unless it’s a ruse, McAllen International Airport is the likely destination which is also just a couple of miles from the US/Mexico border with a major and very busy border crossing there.

A border wall will secure Americans’ civil rights, lower excess American deaths, and reduce migrant deaths, human trafficking, and child exploitation, while guiding people to authorized crossings. Ideally, the wall will be part of a strategy to enact emigration reform, and the local dysfunction (e.g. labor arbitrage, democratic leverage, planned parenthood/selective/recycled-child) that profits from it.

I would hope that a section of any wall would be built in a strategic location, so that it’s effectiveness might be proven, that there would be justification for building other sections, and that it could be demonstrated it was not easily circumvented.

Trump already commented on that the other day. He accurately pointed out that it doesn’t matter where you build it if it ends because the illegals/coyotes just drive to the end and cross there – even if it’s in the middle of the desert, or in Texas, a more remote part of the river. I’m still waiting to see what they’re going to do at Falcon Lake and Amistad, because building a wall on the US side and ceding them to Mexico is inconceivable.

Anybody know on which Tuesday Trump will deliver the SOU? I’d assume tonight but then then wonder why the announcement said Tuesday instead of tonight.

Never mind, I’m a day ahead of the calendar; it’s only Monday today.

Speaker Pelosi has invited the President to present his 2019 SOTU address on January 29th, it was reported last week.

Build the wall, fence, or whatever, as long as it’s effective. Then start rotating troops to patrol our side of the wall. Once we have effectively stopped illegal border crossings we need to get to work on the interior of the country. Let ICE concentrate on the illegal aliens already in the U.S. as well as the U.S. citizens who hire illegal aliens, rent to them, or otherwise enable them (especially NGOs and non-profits). Any welfare employee found to have awarded benefits to an illegal alien should be prosecuted.

1 Declare the emergency.
2 Use DOD funds that would have been squandered in Syria and are being squandered in Iraq and AFG.
3 Built it out of American steel giving places like Youngstown and Pittsburgh a much-needed economic boost.
4 Sign a funding bill once the wall is built.
5 Show the country that nobody needs Democrats for anything.

Once Trump declares an emergency any want to take bets on which Democrat Judge will over rule his emergency?