“Let’s show our respects to an American Veteran.” 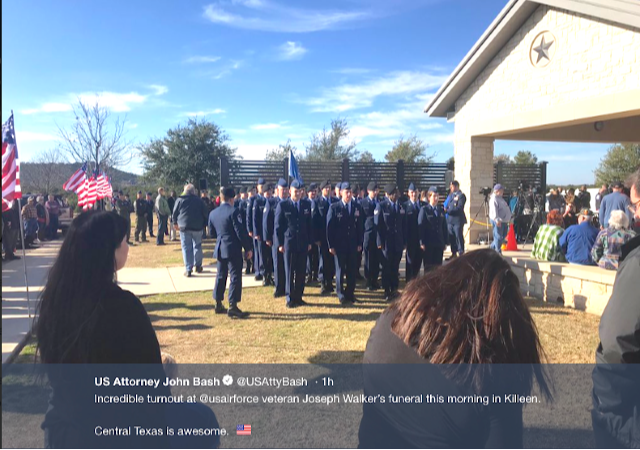 On Saturday, Fuzzy blogged that a Texas cemetery asked the public to attend the funeral of Air Force veteran Joseph Walker out of concerns that no one will be there.

This shows the power of social media. It caught the attention of Sen. Ted Cruz (R-TX) and CNN’s Jake Tapper, who pleaded with people to attend the funeral.

Joseph Walker “served in the Air Force from September 1964 to September 1968, including service in the Vietnam War.” He died on November 19 at the age of 72 of natural causes.

Fox News reported that “his family contacted a funeral home in Austin to arrange for a funeral service but then could not be reached.”

From The Killeen Daily Herald:

An unaccompanied burial for Air Force veteran Joseph Walker drew a large crowd to the Central Texas State Veterans Cemetery this morning, causing officials to delay the start of the ceremony by more than 20 minutes.

A crowd estimated at nearly 2,000 people clogged the roads to the cemetery, causing a traffic backup along State Highway 195.

Cemetery officials had offered the possibility last week that no one would be in attendance for the burial. The Veterans Land Board, which runs the cemetery, works with the local community and fellow veterans support groups to ensure that no veteran is left behind after they pass away.

“This is absolutely the biggest and we want to thank the media. It’s the media that pushes it out real, real far because I was receiving calls from people all the way from Oregon,” said Douglas Gault, the chief on-site representative of the Texas State Veterans Cemetery program.

A KWTX reporter at the scene said the line to get into the cemetery was miles long and initial reports indicate some 5,000 to 6,000 vehicles were in the line.

Funeral services for unaccompanied veterans such as Walker aren’t unusual at the cemetery, but most are attended by only a handful of people.

Killeen, Texas: A line of cars stretching for miles to attend the funeral of an Air Force Veteran with no family.. after fears he would be buried with no one attending. pic.twitter.com/IC5z7IlDjh

We are overwhelmed by all the amazing love and support shown for @usairforce Veteran Joseph Walker who was laid to rest today at the Central #Texas State Veterans Cemetery in #Killeen. Words cannot properly describe how grateful we are to everyone who came out today❤️ pic.twitter.com/NXSbxR1XCq

Now this is America.

Its Flyover Country, anyway. Not sure about the coasts.

Why is it so dusty in my office? This makes all the silly political things seems so much smaller.Thanks for the story.

Awesome post, Mary! I cried when I saw reports of the huge turnout and thought, as Gremlin says above, that this is America, and that we can get bogged down by socio-cultural and political shenanigans and too easily lose sight of the fact that this country is chock full of amazing, patriotic, good-hearted, awesome people.

you helped build this, and for that, we thank you.

another great reason to love, cherish, and support Legal Insurrection.

Yet one more reason to be proud of my state.

This sort of thing happens here in Flyover Country with some regularity. I’m not surprised it is infrequent to seaward of both the eastern and western coastal mountains. Saddened, yes … but not surprised.

dusty in here….
seriously this was awesome.
well done people.

I would like to believe, “this is Texas and that’s what we do”, but Cruz almost lost to a nanny skateboarding buffoon and we lost many congressional seats to the anti American left

This is not the Texas I know…

was born here and have spent a good hunk of my adult life here–as to your comment, would say that it depends on where in the state you happen to be–came up in the era of lbj and some of the shennanigans he and sam rayburn, et al pulled–just as crooked then though definitely not as socialist-oriented as it is now, especially in the major cities–is troubling for sure but have been here a long time and am here for the long term as well–one thing have learned for certain, regardless of what happens in politics, the texan spirit is real, palpable, visceral and it is alive in me, my lady and millions like us–and it will never die