“We apologise unreservedly to The First Lady and her family for any embarrassment caused by our publication of these allegations.” 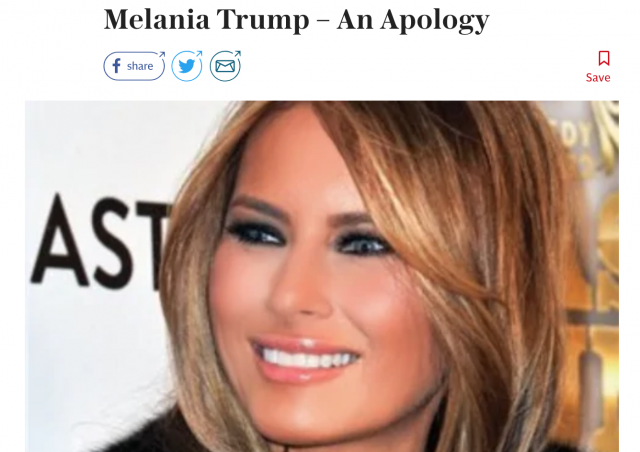 Following last Saturday’s (Jan 19) Telegraph magazine cover story “The mystery of Melania”, we have been asked to make clear that the article contained a number of false statements which we accept should not have been published. Mrs Trump’s father was not a fearsome presence and did not control the family. Mrs Trump did not leave her Design and Architecture course at University relating to the completion of an exam, as alleged in the article, but rather because she wanted to pursue a successful career as a professional model. Mrs Trump was not struggling in her modelling career before she met Mr Trump, and she did not advance in her career due to the assistance of Mr Trump.

We accept that Mrs Trump was a successful professional model in her own right before she met her husband and obtained her own modelling work without his assistance. Mrs Trump met Mr Trump in 1998, not in 1996 as stated in the article. The article also wrongly claimed that Mrs Trump’s mother, father and sister relocated to New York in 2005 to live in buildings owned by Mr Trump. They did not. The claim that Mrs Trump cried on election night is also false.

We apologise unreservedly to The First Lady and her family for any embarrassment caused by our publication of these allegations. As a mark of our regret we have agreed to pay Mrs Trump substantial damages as well as her legal costs.

I’m sure they agreed to pay damages out of the goodness of their hearts . . . .

This is a good thing IMO. It might prevent some of the biased and unprofessional “reporting” about Trump, anyone in his family, his friends, any associates, past, present or future.

But I doubt it. The rabid hate goes far too deep.

But in the meantime one entity got a big hit in the wallet and I’m certainly liking that.

It won’t have any effect on US publications, which are practically immune from such suits.

Next up, nail every single person who posted violent threats against the Covington students….

“substantial damages” – and that’s WITH the groveling apology and clearing of the record. If they hadn’t done that, I think she’d OWN them.

Heh, just think what it would be like if Melania DID own the Telegraph!

Heh, just think what it would be like if Melania DID own the Telegraph!

Are they sacking the journalist responsible for all those errors?

The “journalist” was an American named Nina Burleigh, who is on the staff of Newsweek. She supposedly covers politics for them.

A public admission to ‘false statements’ coupled with “agreed to pay Mrs Trump substantial damages” is DOG WHISTLE for ‘2019 is the year lying, conniving msm propagandists shat all over themselves and drowned in their own filth while the rest of us cheered their deimse, then posted it to social media.’

I know I’m playing Captain Obvious, but why publish a bunch of lies in the first place? Do they have any real journalists in their staff?

It wasn’t written by a Telegraph staffer. It was written by American Nina Burleigh, who covers politics for Newsweek. She also came out with a book about Melania in the fall.

wow. So many provable lies in one article and they had to be sued to come clean?? Why should we ever believe anything written in the Telegraph?

The author of the hit piece was American Nina Burleigh who *covers* politics for Newsweek.

She should be the next target for suing!

And of course that relieves the Telegraph of all responsibility, duty to verify, legal obligations and moral culpability. Why keep repeating this over and over? They are the publishers, they have, editors, fact checkers, a legal department, and proof readers. The story simply fit their preconceptions and they ran with it. Undoubtedly, they would rather have not been fined and reprimanded, but they still hurt Trump and that was their goal.

Yeah, no bias there.

As others have said…how did this drivel get published in the first place???

Ill tell you how…because Trump hatred trumps common sense and common good decency! The liberal left democrats (haha….just repeated myself 3 times) have completely and utterly lost connection to reality to the point they are far more prepared to kill Americans than they are to protect them!

“We’re desperate to get Trump out of office.”

The Telegraph is supposedly the conservative paper in the UK, but it has been anti-Trump since the day he was elected, always snarky, sometimes vicious, as here.

The Covington Catholic boys have lawyered up. Hopefully CNN will be paying not only for tuition at an elite college but also a great set of wheels.

This apology, agreement to pay legal fees and substantial damages came just one week after The Telegraph (which is actually a pretty good newspaper) printed the erroneous story.

That’s time to lawyer up and demand an apology and threaten a lawsuit. Not necessarily time enough to actually file a lawsuit.

Libel laws in England are different than those in the USA. If say the New York Times had printed that pile of bogus claims, their lawyers might have gone behind the “she’s a public person” defense and so if Melania Trump could not prove actual malice then no damages.

OTOH with the vicious level of reporting on all things Trump in the NYT, WaPo and the other baying dogs of journalism, Mrs. Trump might have been able to prove “actual malice”.

No, she would not. “Actual malice” doesn’t mean they hate her, it means they knew it was false, or had good reason to suspect it might be false and didn’t bother checking. So long as they didn’t have a reason to suspect these things were lies a lawsuit would be dismissed on day 1.

Well, I’ll give The Telegraph one thing. That’s how an apology is supposed to read.

The author of the hit piece, Nina Burleigh is still claiming what she wrote is true and wrote a rather nasty Tweet:https://twitter.com/ninaburleigh/status/1089299401040953353