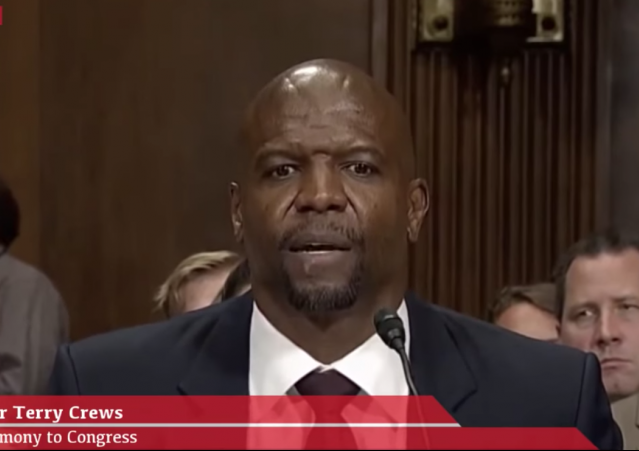 Back in October 2017 when Harvey Weinstein was embroiled in numerous allegations of sexual harassment and rape, actor Terry Crews was one of the first male celebrities to tell his story of sexual assault victimization. He said at the time:

Crews described how, at an industry function in 2016, an unnamed male executive groped his genitals in front of his wife and “grinned like a jerk” at the pair’s shocked response.

He said that he was tempted to retaliate, but was worried how the incident would be reported and feared he would go to jail. “‘240 lbs. Black Man stomps out Hollywood Honcho’ would be the headline the next day,” .

Crews said the executive later called to apologise, but did not give a reason for his actions. Crews chose not to publicise the incident for fear of being ostracised. “Par [for] the course when the predator has power [and] influence”, he wrote.

Crews later sued the man he accused, talent agent Adam Venit, along with William Morris Endeavor. While the case couldn’t go forward because the statute of limitations, WME ultimately settled the lawsuit in September of the following year. At the same time, Venit resigned from WME and sent an apology to the actor, who posted it publicly.

The former “Brooklyn Nine-Nine” star’s story has featured prominently in the #MeToo movement, including his testimony to the Senate Judiciary Committee in June 2018.

Unfortunately, there are some in the entertainment industry – males in particular – who have mocked and joked about Crews’ story.

Crews is having none of it. USA Today reported:

Terry Crews is coming for all the celebrities who mocked his sexual assault, from comedian D.L. Hughley to rapper 50 Cent and others.

The 50-year-old actor started off with Hughley and explained on Twitter that he used to look up to the comedian “as one of the funniest most talented people” but that Hughley is “now an example of when comedy turns to sarcasm and cynicism.”

The “Original Kings of Comedy” star had appeared on VLAD TV last year and said that he couldn’t believe that Crews, “with all those muscles,” couldn’t tell his abuser “no.”

You @50cent @unclerush and @tariqnasheed have decided my sexual assault was hilarious, whereas there are a whole generation of black women and men who don’t think it’s funny.

ABUSERS PROTECT ABUSERS but they MOCK SURVIVORS as well.

When you see me, keep it moving.

That same USA Today report noted that, “Hughley, [record producer Russell] Simmons and [left wing activst Tariq] Nasheed all responded to Crews’ tweets, but only Simmons made an attempt at an apology.”

Crews is right to complain. Think about it: Actor Corey Feldman for years was on the record over and over again talking about sexual abuse against boys and men (by other men) in Hollywood, but few people believed him.

There’s a general misconception that guys can’t be victims of sexual assault because a) “they’re tougher”, b) the assault was “just horseplay”, and/or c) their physical strength will generally be equal or superior to that of a violent perpetrator, but the fact of the matter is sexual assault and rape against men and boys happens more often than you think, and the stigma in reporting it is appalling.

While it’s good that Crews has become a leading, respected voice shining a light on this once-taboo subject, it’s clear by the disrespectful and condescending treatment he gets from some of his entertainment biz colleagues that Hollywood still has a long way to go.

While there is the issue here of inappropriate sexual contact, one also has to recognize that there is also a lot of potential for dark humor. Terry Crews is built like a human wrecking machine, and could be jokingly said that the perpetrator was later charged with attempted suicide. Humor is best done by delivering the opposite to what was expected, so in this case, there is humor just in the thought of Terry Crews being assaulted.

Humor and especially the “art” of comedy take many shapes. Both can be denigrating but don’t need to be. This seems like it’s more than humor but perhaps not really comedy. Without going through every tweet and public statement it isn’t perfectly clear, but it seems like what Crews if calling it is not humor or even comedy – like a bit – but simply efforts to denigrate and ridicule.

I guess the problem is that he’s stepping on the meme of #metoo. It must be reserved for certain people but not all.

What this report really illustrates is the emasculation of the American male. Here we have a man who another man obviously and publicly groped. And, this man did nothing, at the time, to make sure that it never happened again. Simply putting the offending hand into a wrist lock, taking the offender to his knees and loudly stating that if he ever touches you like that again you’ll break his arm. Or, if you prefer a more subtle approach, simply throw and arm around the man’s shoulders, walk him to a secluded spot and explain that the next time this happens, he will wake up in intensive care. You can still speak to his employer, later of you want. In Hollywood, men will not even defend themselves, let alone women. And, if you won’t defend yourself, whining about it later is not very becoming.

I suspect one of the things going through Mr. Crews’ mind at the moment of the assault was: “If I clock this guy, what happens to my career?”

So, what? In the first place, punching someone is not the only way to make an immediate point. As I said, a simple wrist lock will take a man to his knees in most circumstances. This stops the “assault” as well as sends a clear message. Or, have a quiet word with the person responsible where you make the point that any future assault will result in serious pain for him. Then, you should immediately notify his employer, if he is representing them at the time, if you so desire. But, to do nothing about this for years, until making it public works to your personal benefit, is not very manly.

If you allow a fear of losing your job stop you from addressing what you consider a serious injustice, then you are not a man. You are a slave.

Why do you think many (perhaps most) “stars” kept mum over sexual assaults by Hollywood power brokers? A quiet word in the right place can destroy a career. Ask any of the conservative actors who find zero offers for work once their political viewpoint becomes known.

I’m not saying you’re incorrect in what actions Crews could have taken; only that media personalities live in a different world with a different set of rules. Even a wrist lock could be a bridge too far. It’s likely Crews was very much aware of this.

Nothing is worse than a mind reading fool saying what someone else should have done, and what it means.

Terry Crews has bragged about and pushed his personal brand of “feminism” for many years and he has foisted his personal feelings and crusade against so-called “toxic masculinity” on all American men for years via website news stories and in a book and in magazine interviews and on TV shows for several years before some wasted idiot dude in a stupor at a Hollywood party grabbed his crotch and embarrassed him nearly five years ago.

Right, because that totally excuses criminal sexual assault? Is that your thesis?

RE: “Crews is right to complain. Think about it: Actor Corey Feldman for years was on the record over and over again talking about sexual abuse against boys and men (by other men) in Hollywood, but few people believed him.

For men who are survivors of sexual abuse as children or adults, http://www.MaleSurvivor.org has resources to help, including an anonymous forum for men to communicate and a chat room.

For men who are suffering from Dissociative Identity Disorder (D.I.D) or multiple personalities, the book “United We Stand” by Eliana Gil is extremely helpful to families and friends struggling to understand.

Are you arguing that if you don’t report the issue immediately you should shut up about it,and if you don’t you’re whining?

I dare you to say that very shit in front of a woman’s survivor group. I’ll even help them bury your body after they’e done with you.

While it’s not a crime to use someones assault as a joke, but you may lose the respect of a good friend and a good man!