Anastasia Vashukevich, aka Nastya Rybka, arrested in Thailand for prostitution, recants claim she has recordings of conversations with Russians about U.S. election 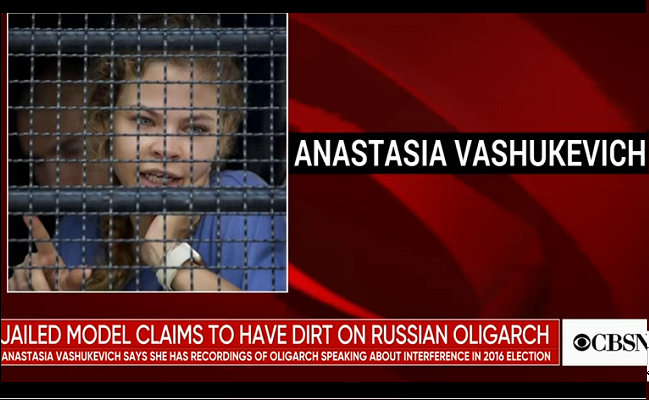 Alleged prostitute Anastasia Vashukevich, also known as Nastya Rybka,was detained last year in Thailand on charges related to soliciting for sex and conspiracy to solicit.  At the time of her arrest and subsequent plea, she claimed to have video and audio tape evidence of Russian interference in the 2016 U. S. presidential election.

She has now retracted that claim and apologized for making a false claim.  It’s not clear why she initially made this claim, but reports suggest that she was trying to leverage this purported “evidence” into a lesser charge/sentence.

At the time of her cryptic claims about Russian interference in the 2016 election, the New York Times reported:

In the interview at the immigration center on Monday, Ms. Vashukevich said that she had often recorded conversations between Mr. Deripaska and his associates, and that she had 16 to 18 hours of recordings, including conversations about the United States presidential election.

“They were discussing elections,” she said. “Deripaska had a plan about elections.”

But, she added, “I can’t tell you everything.”

Some of the conversations were with three people who spoke English fluently and who she thought were Americans, she said.

“It is not only about me,” she said. “It concerns a lot of people in America and other countries.”

The AP had more:

Speaking to an AP reporter in the courtroom in Pattaya, Vashukevich said she had promised Deripaska she would no longer speak on the matter, and that he had already promised her something in return for not making that evidence public.

“He promised me a little something already,” Vashukevich said. “If he do that then there will be no problem, but if he don’t …” she said with a shrug and a smile.

She also shrugged and smiled when asked if she had kept her own copies of the information she recorded, which she said comprised “some audio, some video.”

Asked what the material showed, she said, “You’d have to ask Deripaska.”

Vashukevich created world headlines when she was first detained because she claimed to have audio recordings of Deripaska that provided evidence of Russian meddling in the 2016 U.S. election.

She appealed to America for help and for asylum, through a letter to the U.S. Embassy in Bangkok, but provided no proof of her claims. At a hearing in April, she seemed to switch allegiances, making a public apology to Deripaska and saying it was the Americans, not the Russians, who were persecuting her.

For a fun look at anti-Trump media bias, check out this CBSN report in which the alleged prostitute is described as a “model” and her initial claims described as “Russian involvement in helping Donald Trump become president.”

On Saturday and in a Russian courtroom, the alleged prostitute retracted any claim that she had any such incriminating evidence and apologized for claiming that she did.

A Belarusian model and self-styled sex instructor who last year claimed to have evidence of Russian interference in the 2016 U.S. presidential election said Saturday that she apologizes to a Russian tycoon for the claim and won’t say more about the matter.

Anastasia Vashukevich made the statement in a Moscow court that was considering whether to keep her in jail as she faces charges of inducement to prostitution. The court extended her detention for three more days.

Vashukevich’s statement appears to head off any chance of her speaking to U.S. investigators looking into possible collusion between Russia and President Donald Trump’s campaign.

. . . .  She told journalists in the Moscow court that she has apologized to Deripaska and says “I will no longer compromise him.”

Deripaska is among the Russian tycoons and officials who have been sanctioned in recent years by the United States in connection with Russia’s 2014 annexation of Crimea. His business empire includes aluminum, energy and construction assets.

I don’t think anyone is in doubt that Russia attempted to interfere with the 2016 U. S. election; if they didn’t, it would be an historical anomaly.

But this retraction and apology underscore yet again the tenuous claims that Russian interference in our elections rises to the level of collusion with the Trump campaign. Indeed, the connection between interference and collusion is further exposed as, thus far, a complete fabrication based on sour grapes and anti-Trump wishful thinking.

Oddly, I have this Queen song stuck in my head:

At the heart of every whore is a whore.

Some people just don’t get that.

Same with politicians. Either way.

We can’t bunch all potlicians into the Swamp anymore. Not the likes of Louis Gomert, etc.

Sadly, the majority of politicans are corrupt, or nuts – or both. But the democrat press and the GOPe are worse – and in league with them.

Great indication of the incompetence of mueller and his “team” that this woman was able to totally BUFFALO THEM !

Being a sex professional, she’s probably good at maipulating men who are weak with women.

Just look at Jeff Bezos’ making a world-class fool of himself, his wife and his business over, of all things, a used-up monkey-brancher:

And all she did was grab him by his Amazon Primate.

Bezos thinks the experience he’s having with a monkey-brancher is Prime.

Boy, does Little Jeff have a lot to learn. And he can’t learn in 2 days.

When I was a kid it was known as the BBD: Bigger Better Deal. Each relationship was just a rung on the ladder to something better. And the easiest targets are usually egomaniacs who are self-centered that they never even consider the possibility that they are the mark.

I have known a number of professional athletes and I have yet to meet an SO of one who was barely more than a “hooker on retainer.”

Tiger Woods. But then, his wife divorced him for infidelity.

Woods was just out cheating. He didn’t delude himself that a whore was in love with him, or vice versa.

In the long run it is generally cheaper if you just pay cash up front. Love is expensive.

Bezos send his new cuckholder pictures of his penis prior to dating her and spread them around to all her friends, after which Bezos thought it a good idea to actually leave his wife for the blabbermouth.

Who knows? Maybe Bezos’ photos had good reviews on Amazon.

“An X-Rated Dick Pic”?
Is there a G-rated dick pic?

I gotta disagree with #4 – I used to be close friends with a monkey brancher and a lot of the branches he grabbed were friends or even relatives of the branch he was leaving.

As for #3, letting a girl meet your low-life friends is often a great way to get them to break-up with you.

I don’t know about anyone else, but I’d say she’s cuter than Stormy Daniels, but probably not as cute as Marilyn Monroe.

So is my dogs butt.

Also, my dog is smarter than you. And sane.

I worked as a consular officer in Bangkok back in the early 1990’s. You couldn’t miss the sex industry there even if you really had no use for it. Maybe, hunting up this international sex worker may show that the Mueller crew isn’t as squeaky clean as they’d like us to believe?

They’re all crooks. Every damn one.

Maybe Mueller went along on the excursions pedohile jeffery epstein took bill clinton along on. Or on the democrat senator bob mendendez’s pedo trips.

The Garden State of Corruption, Deviant Sex Crimes and Its Mob of High-Minded-Elite Citizens:
https://canadafreepress.com/article/the-garden-state-of-corruption-deviate-sex-crimes-and-its-mob-of-high-minde

‘Democrat’ and sexual deviancy go hand in hand. It started openly with bill clinton, and went off the charts with obama.

But according to Schiff and Gillibrand even though she has recanted, it needs to be looked into anyway! This is the response they both had on the buzzfeed fake story about Mueller knowing Cohen had been told to lie before Congress. After it was debunked by the head witch hunter himself, they both said that there must be something there and it needed to be looked into!

How is this story ever reported in the first place? Oh nevermind – we all know why. This Cohen defense strategy worked well in the past…amiright?

arrested in Thailand for prostitution

She must cut quite a swathe. Normally I’d figure this would be even harder than getting arrested in Iceland for being blonde.

That one is a howler.

I don’t know that I’d go around proclaiming that I find my dog’s butt to be more attractive than Stormy Daniels.

Your sentiment about Horseface is probably more popular then you think.

I’d prefer to see my dogs butt over seeing the hooker/porno queen.

I’m still trying to process the fact that someone was arrested for prostitution in Thailand!

This chick would be a great CIA “asset”.