In dealing with this walkout, Governor Gavin Newsom may be facing his first significant challenge. 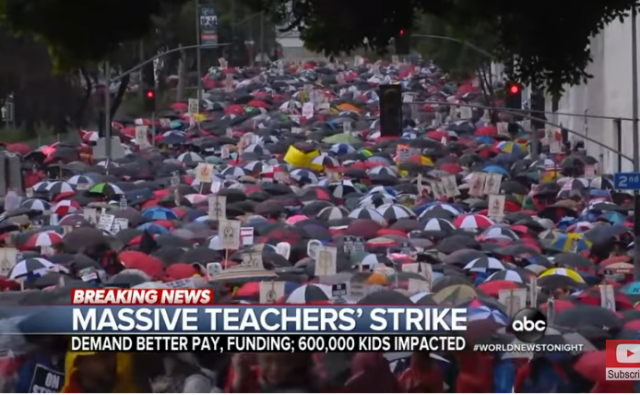 Over 30,000 teacher are now on strike in Los Angeles County.

The Los Angeles Unified School District (LAUSD) serves 640,000 students and is the second biggest school district in the country. The last time Los Angeles teachers went on strike was 1989.

Tens of thousands of Los Angeles teachers are striking after contentious contract negotiations failed in the nation’s second-largest school district.

Members of United Teachers Los Angeles voted last year to walk off the job for the first time in 30 years if a deal wasn’t reached on issues including higher wages and smaller class sizes. The strike began Monday.

Months of talks between the union and Los Angeles Unified School District ended without a deal.

Schools will stay open. The district has hired hundreds of substitutes to replace teachers and others who leave for picket lines.

The district says the union’s demands could bankrupt the school system. It’s projecting a half-billion-dollar deficit this budget year and has billions obligated for pension payments and health coverage for retired teachers.

The offer rejected by the teacher did include a pay raise and a reduction in class sizes. However, it was deemed inadequate.

On January 11th, the LAUSD offered United Teachers Los Angeles (UTLA), the union organizing the strike, a proposal that included a 6 percent salary increase for teachers and promises to enforce a maximum class size of 39 students at secondary schools and increase the number of nurses, counselors and librarians at all schools.

UTLA called the proposal “woefully inadequate, ” arguing that the district is “hoarding” $1.86 billion in reserves that could be used to fund the union’s requests, which include a 6.5 percent pay hike and smaller class sizes. The district maintains these reserves are needed to cover expenses like retiree benefits.

Despite the schools being open, most of LA’s school children took the day off.

Only about a third of Los Angeles Unified students showed up to school Monday on the first day of a teachers’ strike, with many staying away despite assurance from district officials that all campuses would be in full operation.

The school district said 141,631 students came to campus, based on preliminary data. Officials said 54 of the district’s 1,240 schools had not yet provided attendance figures.

The district total enrollment is about 485,000.

The low attendance numbers capped a day of disruption across the city.

If California were a normal state, it might reassess its budget priorities and redirect monies to the people who actually teach. But this is California we are talking about.

In California, where teachers are striking today, the state has spent over $3 billion on “extra” non-teaching staff just in the last couple decades. If the state had matched bureaucracy growth to the growth of student enrollment since 1992, it could give every single teacher an $11,000 raise overnight.

That same $3 billion could also pay for almost 400,000 flexible scholarships, called education savings accounts or ESAs, creating options for the students and families who are being affected by the teacher strikes this week.

The strike may be our new Governor’s first challenge. Gavin Newsom insists both parties go back to the negotiating table, “for the kids.”

Gov. @GavinNewsom calls on both sides in the Los Angeles teachers strike to go back to the negotiating table, saying the “impasse is disrupting the lives of too many kids and their families.” pic.twitter.com/IZkYKK5xXq

However, his progressive fan base is unhappy with this stance.

And some Californians are astutely pointing out the problem with “Sanctuary State” policy and its connection to class size.

.@WhiteHouse .@realDonaldTrump .@GavinNewsom Los Angeles teachers on strike due to heavy load of students in classes. And you, California , welcome illegals with their children. America first!

It looks like the lessons that California’s kids are getting are in virtue-signaling and political theatrics.

1) There is total Democrat control of all political entities involved. No dissenting voices whatsoever.

2) In California, there is no limit to what taxes can be raised on the middle class that exempt the wealthy and the illegals.

4) Any teacher who substituted during the strike will be made a non-person and punished professionally and possibly by the “legal” system.

5) The results will be considered a) bad luck, and b) Donald Trump’s fault.

6) Part of the solution will somehow be to add more illegal foreign invaders to the school system and ban the teaching of English. [OK, that is a guess, but not that outrageous]

let the schools stay closed until teachers come to their senses. That should not take more than 3-4 months. Then either make the kids advance the next following year, or run school through summer.

Boy, it would be fun to watch how that works out.

public school today is 70% daycare, 30% political indoctrination, so every day out of school is a day that all the kids actually get smarter.

In many districts, it seems so.
Scroll down towards the bottom of this Tucson Curriculum with heavy focus on diversity/justice/activism:
http://curriculum.tusd1.org
Keep in mind they are low in proficiency in math 28% and reading 31% (https://www.niche.com/k12/d/tucson-unified-school-district-az/academics/

1. Pay for “Educators”, should be “performance-based”, “with oversight”, to eliminate “prejudice”!
2. How “educators”, teach political reasoning/Ideology, should be monitored by “again” oversight, so as to limit teachers from “persuading”, their personal political beliefs.
3. Class size, “should be ” reasonable, as determined by ‘again” oversight…..{ panel of professionals }
4. Behavior, {of students} must be strictly adhered to, “no disruptions”, violation of any rules, means expulsion of said student!

I wouldn’t be surprised if the following happens:

(1) the Democrat-controlled US House votes for a Federal bailout for the People’s Democratic Republic of California,
(2) the GOP-run Senate refuses to go along,
(3) Trump gets blamed for the strike by the MSM/DNC axis. Never let a crisis go to waste, yadda yadda yadda……

This is one of those things, like the Iran-Iraq War, where the favored outcome is for them both to lose.

I’m sure the showdown between union that pays for Democrat campaigns and Democrat administration will be tense.

The failure of leftism on full display.

But…but…the wrong kind of leftists have been running things in California. We need to get the Change We Have Been Waiting For leftist in charge and THEN it will get better. I swear!

This is 99% about the fatally underfunded pensions. They are always fighting over reducing class size and it never happens. More than half of the state’s taxes are directed to school systems already and test scores keep going down, the 2nd worst in the country. How much money is enough? What is the magic number?

No one cares about education. Not the administrators, not the politicians, and apparently not the parents either. It doesn’t matter if the teachers care when no one else does. It’s mostly just a day care center for non-English speaking children from families who can’t afford private schools. I heard on the radio yesterday that for 85% of the children, this is where they get 3 meals a day. Unbelievable.

And why are the children allowed to strike with the teachers? No one cares.

The decline of California continues.

immediately call a special election. People either vote to fund it or not. Then tell teachers to take it or leave it. If they continue a strike in the face of loss of the election, then fire enough school staff to balance the the budget.

One pundit on the radio today said it was charter schools being the real reason behind the strike. Non union, paid less and producing better results.
Public unions need to be outlawed.

Take a page from RR’s book, fire them! The uptick is that the children’s minds were preserved from indoctrination by action of the greedy indoctrinators.

No matter. The students are learning just as much as if they were in class.

Read the tweet by “Mark Campbell.” Read it again and bask in its eloquence. That’s an LAUSD teacher.

Wonder what it’s costing L.A. to “educate” all those illegals. My cousin teaches ESL in Indiana and she said it’s triple the cost of a regular student.

So, teachers are closing the schools to save the schools. Makes sense, only if you want to justify charter schools getting state funding, which this is what the strike really is about.

The hell with them. Teachers and their unions support every tax increase then wonder why their own dollars are stretched so thin.