Earlier this month, Trump was shown the tunnels underneath existing border barriers. 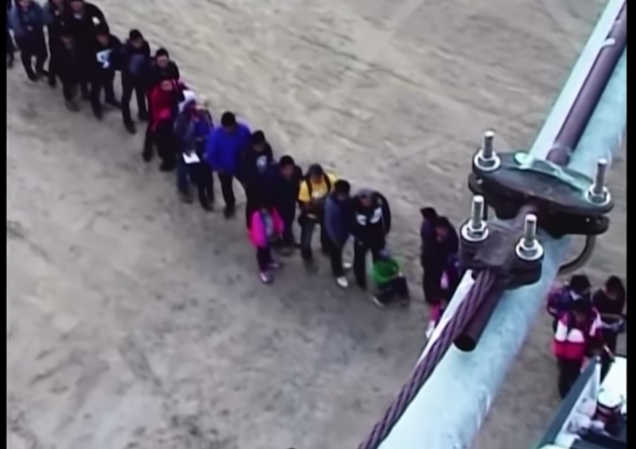 Last week, a huge group of illegal immigrants, all seeking asylum, tunneled under portions of a border barrier near San Luis, Arizona. They voluntarily surrendered to Customs and Border Protection.

The largest single group of asylum seekers ever to cross into the U.S. tunneled beneath the border wall near San Luis, Arizona, on Monday, voluntarily turning themselves into Customs and Border Protection, according to the agency.

Migrants can be seen marching toward Border Patrol agents by the hundreds, according to video obtained by ABC News. Smugglers dug a series of seven holes, only a few feet long beneath the steel border fence, with hundreds going beneath the wall and a smaller number clambering over it, according to CBP.

The fresh sand and scuff marks of shoes on the rusty steel were still there when ABC News visited the site on Thursday.

The agency says 179 of the record 376 people who crossed were children, including over 30 unaccompanied minors — children under 18 traveling on their own.

The mass crossing this week took place in a sparsely populated stretch of the border — where an old model of border barrier rises about 12 feet from the sandy ground. The stretched agency only had three agents patrolling that 26-mile-long section of the border.

It took hours to process the families, most of which were sent to the area’s chronically overcrowded central processing center in Yuma.

“In my 30 years with the Border Patrol, I have not been part of arresting a group of 376 people,” Porvaznik said. “That’s really unheard of.”

Earlier this month, Trump was shown the tunnels underneath existing border barriers.

No one will stop this….
It’s beyond infuriating.

Make it like an iceberg, more underground than above

So now they’re in the ‘system’? They’ll get to live on taxpayer dimes until our damn near worthless legal system sorts them out? It’s such a game.

They walk up to border agents, knowing that once they’re in, THEY’RE IN. They ain’t leavin!

You might call this off-topic, but it really isn’t:

The Texas Secretary of State announced Friday: 95,000 individuals identified by DPS as non-U.S. citizens have a matching voter registration record in Texas, approximately 58,000 of whom have voted in one or more Texas elections.

Sickening. We all suspected it, but still, sickening.

The way to stop this is to lay mines and video stream the results so that people know we mean business. The south border should be completely closed to any new immigration until 20-30 million illegals and all their anchor babies are disposed of.

They say, “talk-talk is better than war-war”. I don’t think so anymore, if I’m going to lose my country and it certainly looks like I am, I’d rather do it on my terms.

I agree with ForksDad; it’s time to invade Mexico like we do every other country causing us a serious problem, and/or declare war on them.

Put 400,000 troops on our border and stop the invasion. Defense spending north of $700 billion and yet we get ZERO defense.

No. We should NOT invade any other country for ANY reason. But, DO place the military along the border: they can still defend their country, and anybody approaching the border from the South should be considered an enemy combatant. Mined? Certainly … a no-man’s land, but wire the mines together so that, if one’s tripped, the ones immediately adjacent detonate. That means THREE. What’s the radius of a detonated mine? That will take out more than one at a time.

And build the wall!!

BTW, Unknown 3rd Party, has it occurred to you they are invading US?

80% of the elementary kids in Whitfield county, Georgia are latin.

I have suggested declaring war on Mexico in previous comments. What it would accomplish is to stop illegals in America from sending money to family in Mexico, that is at least $70 billion a year. We could then start treating illegals as infiltrating agents. After war was declared we could start treating illegals harshly, so much so that they will be eager to return to Mexico.

It is crucial that we put a stop to anchor babies.

It really is long past time to make illegals very sorry that they entered America.

All it does is let us watch them illegally cross the border they still refuse to stop it.

we could build a sea level canal from the Pacific to the Gulf of Mexico, using atomic demolitions…

let’s seem them tunnel under that.

If you build the wall you would have the resources to stop tunnels instead of defnding open ground with your agents. Just another argument to build the wall.

The agents on the ground aren’t defending us; they’re taking names and giving admission tickets.

Defending? haha What a joke.

Okay, granted they stop some terrorists. Other than that, they’re the welcome wagon.

There would be merit to placing anyone caught in America illegally in stocks for the first 30 days.

http://www.Ace.Mu.Nu
This is failure theater. As Derek Hunter explained (or reminded) in a Daily Caller podcast just before Christmas, the Senate rules actually require a talking, real filibuster for a filibuster to actually stop a bill. That means that everyone has exactly two (2) times to talk, and they can talk as long as they want, but they must talk, and they cannot take breaks. That would end their speaking slot.

When all speakers who want to speak have spoken twice — that’s it, filibuster is over. Cloture now happens by majority vote and we proceed to a vote on the actual substance of the matter.

McConnell knows damn well this is the rule for filibusters but he’s made a gentlemen’s agreement with non-gentlemen that they will pretend they’ve done a real filibuster if they merely refuse to vote for cloture.

The problem with insisting on a real filibuster, and the reason why both sides don’t insist on it, is that the minority will do it, and meanwhile the senate’s other important business will be frozen. Doing an Arthur Dent agreement (“I’m willing to lie here all day, you’re willing to wait all day, so you don’t actually need me here; let’s just stipulate that I’m here and we can both take a break”) lets the rest of the people’s business, which is not controversial, go ahead. It’s not as if the Dems would balk at actually filibustering; they would play it up to the max, just as the Reps did when they were in the minority.

Did I miss something, or were pictures of tunnels missing from all the photos and videos in the blog posts?

We should partner with the Israelis. They’ve developed the technology and techniques to stop Hamas terrorists from tunneling under their security fence.

Drive them back to a border fence. Catapult them back over.

We need to deploy 20,000 or so semi mounted human canons,rum them 24 x 7, 5 years would have most of then on the other side of the border. The charge used to launch should result in at least one broken bone. That charge should be doubled, compounded, for each repeat offence.

We need to stop granting asylum requests if people don’t come to an actual border crossing location. No more hopping or funneling under the fence then claiming asylum. Thats’s bullshit and the whole world knows it. I’m sick of getting played. If Trump isn’t serious about building the wall (and it’s looking like he isn’t), at least knock off the frivolous asylum requests.

Unfortunately that requires a change in the law, which means it must pass the house and overcome a filibuster in the senate. In fact if we fixed the asylum law we wouldn’t need a wall nearly so much.

Many people probably admire these migrants for their exploits and view them as harrowing, heroic figures. I never had a single amount of animus toward any of them as people. I simply don’t see the complete chaos of a no-border policy as sustainable. Apparently, a pretty substantial faction of civilization wants this: an official immigration policy that stingily chooses people, and an unofficial one that adds self-selected people without limit. When the law is not convenient for us, we’ll just ignore it completely.

Is that really what society wants? I sit here and wonder.

Come on guys…Democrats have been telling us there are no issues at the border so CLEARLY this problem never happened.

Going to have to stop it ourselves. You might have to miss a few basketball games and eat take out. Worse than Valley Forge.