One of the leading experts on the pathological nature of anti-Israel and pro-boycott groups, as well as Palestinian incitement and campus antisemitism. 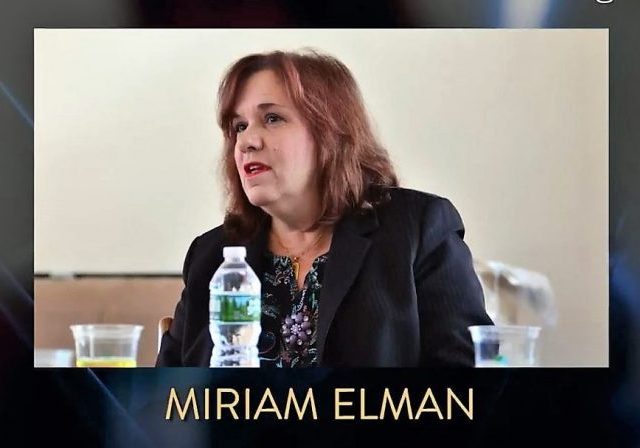 Syracuse University Professor Miriam Elman has been covering the anti-Israel movement for Legal Insurrection since her first Guest Post on November 9, 2014. Since then, Miriam has published over 150 posts.

Wait, wut, we’re coming up on Miriam’s 5th Anniversary at LI next November?

Miriam has established herself as one of the leading experts on the pathological nature of anti-Israel and pro-boycott groups, as well as Palestinian incitement and campus antisemitism.

By way of example, Miriam’s coverage of the disgusting blood-libelous Deadly Exchange campaign by Jewish Voice for Peace and other groups has been instrumental in the push back that is developing.

Her work for Legal Insurrection, however, is just as small part of what Miriam does. And what she does has been recognized by the Academic Engagement Network, a group of several hundred “American university and college faculty and staff formed for the purposes of opposing the Boycott, Divestment, and Sanctions (BDS) movement, standing for academic freedom and freedom of expression, and supporting education and robust conversation about Israel in the academy. AEN also opposes antisemitism where it appears on campus.”

Miriam was just appointed Executive Director of AEN. Here is the press release:

Washington, DC, January 24, 2019: The Academic Engagement Network (AEN) is pleased to announce the selection of Professor Miriam F. Elman as its next Executive Director, after an extensive search and interview process. She will officially assume this role on May 15, 2019, replacing AEN’s current Executive Director, Kenneth Waltzer, who announced his retirement in the fall of 2018.

Mark Yudof, Chair of AEN’s Advisory Board, expressed optimism about Elman’s future leadership. “I am thrilled with Miriam’s appointment as executive director. She brings enthusiasm, energy, experience, and insight to the position. I look forward to working with her in the years ahead.”

Elman is an Associate Professor of Political Science at the Maxwell School of Citizenship and Public Affairs at Syracuse University, where she was appointed the Robert D. McClure Professor of Teaching Excellence. She is also the Research Director in the Program for the Advancement of Research on Conflict and Collaboration (PARCC). She is the editor of five books and the author of over 65 journal articles, book chapters, and government reports on topics related to international and national security, religion and politics, the Middle East, and the Israeli-Palestinian conflict. She will be taking a leave of absence from Syracuse University to assume her role at AEN.

Elman will bring a wealth of knowledge and thought leadership about the pernicious impact of the BDS movement and other forms of hostility to Israel on college campuses and within academia. She has written about issues such as the “stealth boycott” of Israeli scholars, the relationship between on- and off-campus BDS organizations, and the growing influence of groups such as Jewish Voice for Peace and If Not Now. She frequently speaks about these issues to a wide variety of media and community organizations, and has published articles and reports in many publications and blogs, including the Algemeiner, Ha’aretz, Legal Insurrection, NPR, and the Forward. In 2018, she was named by the Algemeiner as one of “the top 100 people positively influencing Jewish life.”

Elman is excited about her future role. “The AEN is a recognized leader in the areas of campus free speech and academic freedom, and has a strong track record in combating efforts to vilify and delegitimize Israel on colleges and universities around the country. I am delighted to have the opportunity to join the AEN as its Executive Director during this critical time in U.S. higher education.”

AEN has planned for a smooth transition process. Kenneth Waltzer, will retire as Executive Director at the end of January, and Michael Atkins, currently AEN’s Deputy Director, will serve as interim Executive Director from February 1 through May 14. Waltzer will stay on as a senior consultant to AEN during the spring of 2019. Elman will also serve as a consultant to AEN until the start of her appointment.

AEN is deeply grateful for Waltzer’s three years of service. Under his leadership, the organization has grown to nearly 650 members, engaged and mobilized these members through conferences, convenings, and educational programs, and established itself as the leading faculty organization countering the BDS movement on college campuses.

Said Yudof, “Ken Waltzer has been an outstanding executive director, overseeing AEN’s tremendous growth in its first three years. He ably implemented initiatives, led short courses and convenings, and produced numerous important articles. We will miss his leadership, and wish him the best in his retirement.”

Prior to her academic career, Elman served in the Israel Defense Forces and lived in Israel for over a decade, completing her B.A. in International Relations at the Hebrew University of Jerusalem. She received her M.Phil. and Ph.D. degrees in political science from Columbia University.

Now that she’s a big shot, does this mean we’re going to lose Miriam? Nope, we can look forward to many more years of her research and writing about the anti-American, anti-Capitalist, anti-Israel and antisemitic activists.

Sunshine is the best disinfectant, and Miriam plans on continuing so shine the light.

Can we get a round of applause?

Thank you! Much appreciated!

My pleasure (and with no internet sarcasm included…).

A voice announcing the dawn. Congratulations.

Working on it, Justice Delivered–now it’s my day job!

One of my fav LI authors…always so detailed and informative!

Wow, that means a lot as the writers on this site are outstanding. (The readers are pretty amazing too!)

Prof Jacobson has a keen eye for talent.

Thank you, that’s very kind of you to say. It’s a pleasure to write for LI. I’m grateful to Prof. J, colleague and friend, for all his insight and support over the years!

Prof. Elman, congratulations on your appointment! And thank you for your fine contributions to LI, past, present and future.

Outstanding. Congratulations to Prof. Miriam Elman and the Academic Engagement Network, and to Legal Insurrection as well of course. Her contributions and coverage for LI has always been exceptional!

Congratulations Miriam, wish you continuing success in pushing back against BDS and similar organizations!

Simply outstanding! I’d say not only is a round of applause in order a bit of the bubbly is in order as well. Thank you, Professor Elman for being a, if you will, a warrior for truth.

Congratulations to Professor Elman — keep fighting the good fight against Leftist/Islamist historical and theological ignorance/propaganda and abject Jew-hatred. A never-ending battle, against the forces of darkness and their contemptible enablers and collaborators, amongst Leftists and Dumb-o-crats.

Harrah to Prof. Elman for an honor well-deserved!