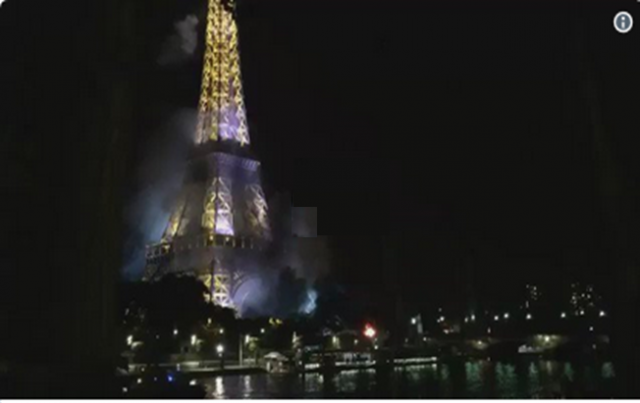 Before the Christmas break, Legal Insurrection readers may recall that fuel tax rises that led to weeks of citizen protests in France were postponed for six months.

The upcoming lawsuit says the country has failed to adequately address climate change. Four French organizations—Greenpeace France, Oxfam France, Fondation pour la Nature et l’Homme and Notre Affaire à Tous—took the first step toward a lawsuit by sending a letter of formal notice to Prime Minister Edouard Philippe and 12 members of the government. The letter describes climate impacts that France is already experiencing and explains how the government’s failure to take action endangers the welfare of French citizens. The request further urges the government to adopt specific climate adaptation and mitigation strategies.

French officials have two months to respond. The groups may then officially file a case in the Administrative Court of Paris. The case will likely take two years to proceed.

Paul Mirengoff, a contributor for Powerline, had this analysis of the suit’s chances of success:

To my knowledge, France has no legal obligation to impose the carbon tax. Nor, in our system of jurisprudence, is there a general cause of action against the government for “not doing enough” to combat a particular problem. Otherwise, I might sue our government for not doing enough to keep criminals off the streets.

Despite the fact that the carbon tax, an important component of the Paris Climate Accord, was a key motivator for the Yellow Vest protests, a green justice warrior insists that the French citizen activists welcome eco-taxation.

“What they [yellow vests] want first and foremost is social justice and financial justice. And there will be no social justice without action for the climate,” In Our Common Interest President Marie Toussaint told reporters. Her group is one of the four non-government organizations seeking to sue France.

“Global warming feeds on inequalities and strengthens them. It strikes the most fragile first. It is destroying our economy and our territories. So, it can be a process that can be done in parallel,” Toussaint said.

What is more likely to succeed is the spread of Yellow Vest protests.

Protesters threw fireworks, stones and patio furniture at police officers, said a statement by police in the city that hosts the seat of the Netherlands government.

Around 150 to 200 people had gathered for an “unannounced” demonstration for which organisers did not give authorities any notification, the police statement said.

Wearing yellow vests, they shouted slogans and blared air horns outside the Ministry of Finance in Taipei, the capital city, and waved banners calling Taiwan’s tax collection policies illegal. Some wore clear plastic raincoats over their vests in a light rain.

The Yellow Vests are also active in Belgium.

A Facebook group for Yellow Vests in Belgium lays out some of their demands to the government: lowering the retirement age, decreasing fuel excise duties, decreasing the cost of electricity and water, the choice of referendums at all levels of legislative decision-making, increasing pensions, improving public services and increasing purchasing power. The average price of electricity has risen €10 in the past year. Protesters describe a general “ras-le-bol fiscal”, or financial despair.

Nowhere in these above articles do I read that citizens are clamoring for more climate change regulations, fees, taxes or restrictions.

Protesters have set cars alight and left them to burn in the streets of the capital city, as a demonstration against the French government’s tax policies resumed for the seventh consecutive week.

Shocking images show the iconic tower masked by a covering of smoke and cars engulfed by burning flames sit abandoned on the roadside as demonstrators continued their stand off with authorities.

In fact, I get the sense the French not only want to get out of the Paris Climate Accord, but the European Union as well. #Frexit anyone?

In light of these developments, President Donald Trump appears to be a stable genius for pulling the US out of the Paris Climate Accord. On the other hand, soon-to-be Speaker Nancy Pelosi is organizing a “Select Committee on Climate Change“.

Given how effective congressional committees have been, I am none too worried that anyone outside of California will be needing a Yellow Vest soon.

“The letter describes climate impacts that France is already experiencing and explains how the government’s failure to take action endangers the welfare of French citizens.”

For a minute there I thought the suit was about the wall-to-wall Muslim problem.

If you ever wanted to know how dysfunctional the view of Government is to Progressives/Socialists/Liberals you just have to look at this where they think you can impose a tax through the court system. That seems like a perfectly fine way to decide something in a Democratic Republic to them.

The american news complex has gone suddenly quiet on this. Cannot imagine why